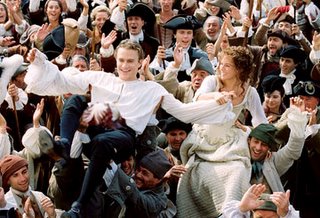 The role of the title character in Casanova was chosen by Heath Ledger after he did Brokeback Mountain. It was a logical choice, if I were an actor, I would want to be in a much lighthearted and cheerful fare after doing something as depressingly angsty as Brokeback too. The director of this film is Swedish director Lasse Hallstrom, whose better-known films are Chocolat, Cider House Rules and What's Eating Gilbert Grape, so I guess he is quite a serious director (although the aforementioned works do possess certain hints of humour)

Casanova is pure farce, a comedy of mistaken identities and romance that is unlike most other films by Lasse Hallstrom. When it was released in the United States last year, it received rather lukewarm critical and commercial reception (it barely made 11 million dollars in the box-office). I'm not surprised, this is an unspectacular movie that is so cheery and airy that you will most probably forget about it once you've walked out of the cinema, and this is the complaint of many reviews I've read. It lacks substance, it's not Oscar-bait, Heath Ledger didn't deliver another Oscar-worthy performance etc. blah blah blah, but I don't really think Casanova is trying to achieve either of those.

Many film critics walk into a movie hoping to be impressed, and by not doing thus, they end up disappointed, and unsurprisingly pen a less than glowing review of said film. I walked into the cinemas not expecting to be impressed by this film, just to be entertained, and I have to say, I was entirely entertained by it, there wasn't a single second when I was bored, this is a crowd-pleaser with a happy ending (which... was another complaint of some film reviews). With veteran cast members (Jeremy Irons, Oliver Platt, Lena Olin etc.) who went into scene-stealing mode, probably having a good time too, I guess.

Casanova is famous for his exploits as a lover, to the point when his name has entered the English language, and is used to suggest someone being a promiscuous lover, and yes, back in the 18th century, there was indeed a man called Giacomo Casanova, a writer and adventurer whose extraordinary life and adventures are recorded in his memoirs. And apparently, his adventures are pretty damned interesting, according to Wikipedia entry, and Roger Ebert's review, he was a magician, an author, a lawyer, the secretary to a cardinal, a politician, a violinist, invented the national lottery, was a spy and a diplomat a magician, quite amazing, really, and I doubt all of these can be fit into a movie. This one is mostly fictional, and it's about Casanova (Heath Ledger) being at the height of his, um, powers (at the age of 25), and then genuinely falling in love with a woman called Francesca (Sienna Miller).

It all happened when was he was ordered by the ruler of Venice, the Doge, to marry someone in order to escape Inquisition, thus he engaged himself to Venice's most famous virgin, Victoria (Natalie Dormer), who is actually much naughtier than she looks. Giovanni (Charlie Cox), who lived right opposite Victoria''s, and had been in love with her for years, was absolutely pissed, and challenged Casanova to a duel. But his sister, Francesca, took his place instead since he wasn't that good with a sword (a bladed one anyway) and fought Casanova to a draw. Revealing herself as a beautiful woman, Casanova was immediately in love (and realized that he made a mistake with asking for Victoria's hands), but Francesca was a modern feminist who despised everything Casanova stood for, and was already engaged to a fiance she had never met Paprizzio (Oliver Platt), a marriage of convenience arranged by Francesca's mother (Lena Olin).

Casanova tried to win her heart by referencing to feminist literature that Francesca seemed to like, not knowing that those books were actually written by her using a pen name. Hilarity, mistaken identity, romance ensue.

Like I said, this film is entertaining, it's not amazing, it's not mindblowing, it's just a harmless romantic comedy which might be better to watch on the small screen. Filmed in Venice, this is a very beautiful-looking film that made me want to go to Venice immediately (... it IS one of my dream places). I was briefly discouraged by Luciano Visconti's pretentious Death In Venice that it was a dark and gloomy place (well, it IS about some dirty old man lusting after some young boy and then dying in the end anyway without the young boy ever knowing about his existence), but bloody hell, the Venice in Casanova just looked stunning. Oh, and the pics below are from Flickr, not from the film itself, couldn't find a good enough screenshot to prove what I'm saying.