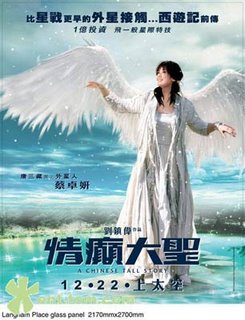 This film has received some rather mixed reviews, and it did only middling business in the box-office, but knowing that this Jeff Lau film is a quasi-sequel to Stephen Chow's Chinese Odyssey (which was also directed by Jeff Lau), I was looking forward to see this film, and was rather annoyed that I never had the chance to see it when it was showing at the cinemas, nor was I able to find anyone to watch it with me. It was already judged as a shitty film. Perhaps it had to do with the cast. Having guys from Boy'z as the Tang Monk's (Tripitaka) disciples doesn't really help matters. Nicholas Tse's once-promising acting career has been buried by one tabloid news after another, and Charlene Choi? Well, she's from Twinz. What more do I have to say? I can't even name a film which she doesn't annoy me... except, maybe that Andy Lau film last year. That's because SHE DIED IN THE BEGINNING OF THAT FILM.

Right, A Chinese Tall Story, like Stephen Chow's Chinese Odyssey ten years ago, and the more recent disgustingly overrated anime Gensomaden Saiyuki, is loosely based on the Chinese classical novel, Journey To The West. So yeah, it's still about a monk, Tripitaka's quest to retrieve a scripture from the west, and he's protected by his three disciples, Monkey King, Piggy and Friar Sand from all kinds of dangerous demons and stuff. Usually, in past adaptations (including the Stephen Chow flick) the Monkey King is the most colourful character of them all, a badass devil-may-care type who does most of the asskicking. But then, this film is a rare exception, with the spotlight focusing upon Tripitaka instead, about an unlikely romance he was involved in. ... a monk falling in love??? Maybe disgustingly overrated anime Gensomaden Saiyuki showed how juicy the roles of the other characters can be, since it focused just that much on Tripitaka (called Sanzo in the series). And having bad boy Nicholas Tse as Tripitaka? Whoa, that's like asking Russell Crowe to play the Pope.

This is a wacky fantasy film, with anachronisms appearing everywhere, and all kinds of films being parodied. Monkey's Golden Staff transforming into the battlemech from Matrix Revolutions? Tripitaka dressed up as Spider-man? Monkey King attempting the whole 'whispering secret to hole' trick from Wong Kar Wai's In The Mood For Love and 2046?
An alien princess who holds a cigarette like Tony Leung in In The Mood For Love? Getting involved in epic battles against UFO and demons? This is one insane film.

And as I've said, being a fantasy film, I didn't really understand this particular line from this review from BRNS.com:

Here reformed rebel Tse plays naughty Buddhist monk Tripitaka, on a pilgrimage to the hallowed city Shache, which turns out to be yet another stereotypical portrayal of what moviegoers in China today are supposed to expect India to look like. Thus, the place comes nestled around some hills and you get people dancing in the streets to the merry tune of off-screen snake tamers. Whoa, as Neo would probably have quipped.

Er, hello? This is a fantasy film, I see a fictional fantastical city with some kind of exotic Indian influences, not a so-called stereotypical portrayal of India. That's almost like dissing elves in Lord of the Rings for being a stereotypical portrayal of tree-hugging hippies. I am directly addressing this review because, this review also claimed that 'the awkwardly-titled newer film has more to do with stuff from the first half of this decade, namely goofball comedies like The Lion Roars and Himalaya Singh. And when we tell you that Tall Story's not even as accomplished as those, that should be enough to seal its fate and consign the thing to that dubious realm of half-baked movie projects hovering somewhere between the recycle and bargain bins.' Sorry, but I definitely do not think that this film is worse than that steaming pile of turd known as Himalaya Singh (read my review here). In fact, to compare this film with Himalaya Singh is a travesty. The humour in Tall Chinese Story may be rather over-the-top, but ultimately, it has some pathos and emotion during the third act of the film, Himalaya Singh was a puke-inducing vicious slap upon any viewer's face.

It's difficult for me to summarize the plot of this film. Tripitaka and gang get ambushed by armies of demons during their quest. Tripitaka manages to get away, and then runs into this ridiculously ugly lizard imp chick (Charlene Choi). Ridiculously ugly lizard imp chick falls for Tripitaka due to some wacky misunderstanding. On their series of misadventures to rescue Tripitaka's disciples, she tries to turn him into a bad boy, and also to win his heart.

Yes, the comedy in the film can be amusing and fun, but one can feel that it's too over-the-top sometimes, but I guess it's Jeff Lau's style to embark in such pointless Dadaist humour. So that the shift of gear from madcap comedy to emotional drama can be felt more strongly, he did that very successfullly with the classic Stephen Chow film (after all, the 'if my love for you has to have an expiry date, let it be ten thousand years' quote is a rip-off of Takeshi Kaneshiro's line in Chungking Express, but it became a classic quote that entered Chinese pop culture), he did that too in the mediocre and bafflingly critically-acclaimed Chinese Odyssey 2002 with Faye Wong and Tony Leung. And I think it worked too in this film. I liked it not for its humour, but for the surprising charm and emotion. I was surprised how 'epic' the film was (if the CGI in this film weren't that bad, exactly like a PS2 game, I think this would've been very mindblowing), and how affecting the romance between Tripitaka and ridiculously ugly lizard imp chick was, which all led to a heartfelt finale with numerous memorable lines. Let me paraphrase some:

"Her love for you is the greatest love of them all because she loved you without expecting to get anything from it."

"The furthest distance in existence is not between a two souls of a one-sided love affair, but between two who clearly loved each other, but could not be together." 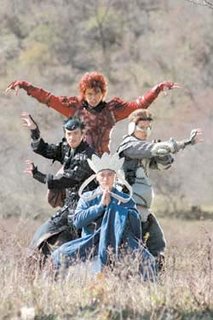 ... right, I suck at translating them, and I don't have the DVD with me right now, but I doubt the subtitles are much better.

Joe Hisaishi, regular composer of Hayao Miyazaki's (he did the music for all Studio Ghibli classics directed by Miyazaki, from Nausicaa to the latest Howl's Moving Castle), was splendid with the score he did for this film, hell, the music was so stirring that it had me all choked up in certain parts of the film. Which is also something I didn't expect from this film too.

This film really isn't that bad.