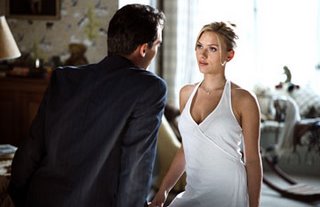 This is a very British film (well, I'm sure the real Brits would argue that the Brits in the flick don't really act like real Brits, which would be lost to me considering that I have no idea how actual high-level Brits would act) about a tennis instructor (Jonathan Rhys-Meyers, the girly dude/love interest in Bend It Like Beckham, and the guy who played Elvis in the Elvis miniseries) who managed to befriend a rich dude (Matthew Cooke), marries the rich dude's sister (Emily Mortimer), and then has an adulterous affair with rich dude's fiancee (Scarlett Johansson). Then, some complications occur, the guy faces the possibility of losing all the luxury he has gotten after marrying the rich chick when the wrong woman got pregnant. He has to TAKE ACTION!
Basically, the main guy of the film is the bad guy, it's a matter of whether you would root for him, or root against him. The elderly couple sitting next to me were whispering angry insults at the main character while watching the film. It's interesting, it's also about how luck is mostly responsible for a person's success. Some may not like this idea, wishing to believe that it is dilligence and patience that are keys to a person's success, but then, luck is crucial in everything. After all, this guy has an adulterous affair with Scarlett Johansson... SCARLETT JOHANSSON, omfg.

Whilst I was allowing my eyes to feast upon the beauty onscreen, my mind scattered towards a thousand directions, I tried to put myself in the guy's position, and realize that even if I will remain faithful to my wife, the sight of Scarlett will most probably make me hide in the bathroom and weep every night for not marrying her. Er, damn, this review would've been longer, but I 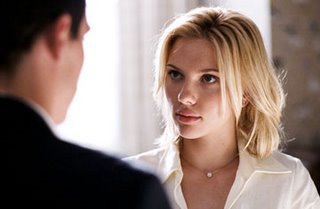 find myself having some difficulties trying to articulate a proper review. It's all Scarlett's fault, really. Life had never been the same since I saw Lost In Translation and Ghost World. It's unfortunate that people in Malaysia wasn't truly introduced to her until the mediocre (it's NOT Michael Bay's shittiest film, to be honest) The Island (my review here). And I also happen to be one of the few people in the world who saw the Brit film she was in last year, A Good Woman too. (my review here) Hope that she can get a more juicy role though, she was the lead in The Island, but ultimately just a love interest, and then I think she didn't seem to fit in A Good Woman (it was a kind of role anyone could pull off, since Helen Hunt was the one getting most of the attention)

Anyway, this is an interesting film, but I wonder whether it will still be that well regarded if it weren't directed by Woody Allen. I just enjoyed it when the main guy started doing truly evil stuff... to the disgust of the elderly couple sitting next to me.

Other Reviews of Match Point:

Note: If you've done a review of Match Point, just feel free to post the URL at the comments section.