Stumbling Into The World of Robert Altman 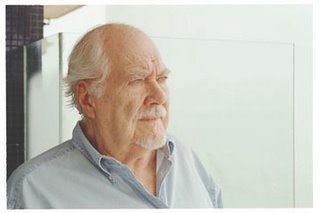 It takes place within the span of a night in a mamak stall. (note to international readers: Mamak stalls are indian restaurants opened for 24 hours that can be found anywhere in Malaysia. It's a favourite hangout place for all kinds of people. People are there for the great curry dishes, the fried noodles, the roti canai (indian pancakes), the drinks (just milk tea, coffee etc. nothing alcoholic). A hangout place where people can just chit-chat, or watch the latest English Premiere League match. It's a subculture in Malaysia) An ensemble flick where a colourful cast of characters will be involved in various kinds of subplots while they were at the mamak stall. A bunch of football-crazed fans mouthing off while watching a game on TV, a man whining about his work with his buddies Clerks-style, a bunch of high school girls trying to entertain a Japanese person (from a student exchange program) with the mamak food, leading to comical results, a young couple confronting each other for their infidelities, a wealthy couple complaining about the less-than-satisfactory condition at the restaurant, a bunch of old men speaking about old times, two policemen resting from their duties, a pirated DVD peddler comes over to display his stuff.

Meanwhile, within the kitchen, conflict arises between the different employees due to a minor incident. The owner of the mamak stall struggles to keep everyone from killing each other while trying desperately to hide the fact that he had sold the restaurant to someone else (kinda like barber shop), rival chefs trying to outdo each other etc.

Just let the camera roll. Show the actions amongst these people. No plot, no three-act structure, just show the audiences how colourful a Mamak stall can be.

Unfortunately, I had forgotten entirely about this idea after I came to Perth.

Funny that this idea for an ensemble flick came back to me nearly two years and two short films later. Maybe it had to do with the fact that I was planning to write about the man known for his multi-character epics, Robert Altman for the Robert Altman Blog-a-thon. This Blog-a-thon is called by Matt Zoller Seitz to honour this legendary director, who is receiving the Lifetime Achievement award during the upcoming Oscars (ON MY BIRTHDAY!). I immediately signed up for it because, well, I happened to have just finished watching 'The Company' hours earlier (and fell asleep halfway through), and based on the comments on that site, I doubt the others were going to write about it. 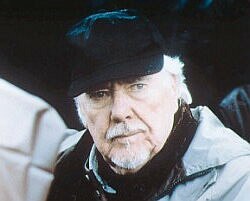 Then, I remembered that I've only seen a grand total of THREE Altman films, Popeye, Gosford Park and The Company. Just these three, and neither of the classics like MASH or Nashville that launched him into prominence. Therefore, to have a guy who has only seen THREE Altman films writing something to pay homage to Altman would be rather difficult, whilst writing a simple review of 'The Company' would make things rather pointless and insincere, but ignoring all these, I popped 'The Company' into my DVD player to start watching again. Yet my attention wavered, and during I couldn't find myself going through the beautifully choreographed dance scenes without pressing the fast forward button. I was clearly in danger, yet too stubborn to admit that I was definitely not the right person to do an Altman article.

The film ended, the credits started to roll, and I continued staring blankly, wondering what I could do. My father was on MSN, thus I decided to seek counsel from him, the conversation was pretty much like this:

The Great Swifty: Dad, I've just joined this Robert Altman blog-a-thon, and well, lots of people will be writing about him, I think.

Dad: Have you seen Nashville? I saw it when I was your age, and I loved it.

Dad: Then which film are you going to write about?

The Kinda Sorta Great Swifty: The only one I have in my hands, The Company. But it's difficult to write, the whole thing's like a documentary!


Not entirely happy with my predicament, I seeked Guestblogger Justin for help, hoping that he could conjure a surreal Altman-related article, perhaps something similar to the one where he pointed out the gay subtext of West Side Story. Alas, he had only seen Gosford Park, thus meaning that I had to deal with this by myself.

As you can see by now, I'm using the Charlie Kaufman method from Adaptation. As I can't write anything interesting about something, I shall cop-out to write about myself writing about that particular item. But by doing this, will I be lynched?!! Better shift the attention to the movie again. 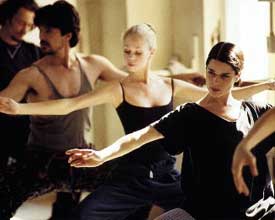 The Company is a 2003 film directed by Altman after Gosford Park, yet it was seldom spoken about. Perhaps it was considered a disappointment after the critical acclaim of Gosford Park (a film considered by many as another high point of Altman's career)?

This film is set in the Joffrey Ballet of Chicago (an actual company, with the real dancers being in the film), and it follows the company for a season. Many call it an ensemble drama, but is such a film still considered an ensemble drama when we never really get to know most characters as individuals? The attention is focused more on a young member, Loretta 'Ry' Ryan (former Scream queen Neve Campbell, who co-wrote the script) and the chef she is romantically involved with (James Franco, Harry Osbourne in the Spider-man flicks). Then there is also the artistic director/ co-founder Alberto Antonelli (Malcolm McDowell), who gives advices like "You're all so pretty. You know how I hate pretty."

Watching 'The Company' was like watching a documentary, it wasn't really bad, just that it didn't generate a single ounce of emotion from me, thus failing to blow me away (... I doubt that was Altman's intention, directors like him don't aspire to 'blow someone away', I guess), just a matter-of-fact look at a ballet company and its members. Like all documentaries, it only appeals to me if its subject matter is something I am interested in. Whether is it truly an accurate depiction of such a company is not the question, although I assume that the world in the film is less a mirror of reality than a representation of reality altered by Altman's vision (... I'm stating the obvious, am I?). And without much effort, he drew me into a world of ballet, I think someone from the ballet crowd, or someone interested in this would've appreciated this film a lot, alas I am not a member from such a crowd. Perhaps this film does not really suck, just that I'm not its target audience, I think it will be rather difficult for me to actually sit through it again, but then, that is pretty much like being dragged off for dinner with people who don't really click with you. 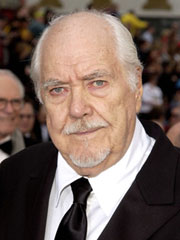 Film reviewers of The Company are divided into two camps, those who like the documentary-style approach Altman used for the film, and those who er, don't (based on Rotten Tomatoes, these people belong to the minority, but the IMDB message boards might show otherwise). Lawrence Journal World's review states that The Company" 'is just as narratively misplaced (as Kansas City). Although the rehearsals and performances are scrutinized in great detail, the people behind these episodes are a complete enigma.' and similar to what I've said, 'It's like the audience has been asked to attend a dress rehearsal conducted by complete strangers and told to sit in the corner and not ask questions. Even an amateur home movie of this same subject would feature some thread of a plot.' While Eric D Snider's gripe about the film is slightly different: 'Even the rehearsals have a certain fascination to them, as it is intriguing to see how something like this comes together, the nuts and bolts of it all. Where the film goes wrong is in showing the characters away from the stages and the rehearsal halls without giving them anything to do.' (his review is here)

But here's what Altman had to say about his approach (from the Hollywood Reporter review which calls the film 'the film a visual and aural extravaganza open to many repeat viewings.'):


"We were not trying to make a dramatic film, we were trying to make a 'day in the life of, the problem I had in doing this picture is that I had 45 dancers and five actors. I couldn't make the dancers learn to act, and so I had to make the actors become kind of like non-actors."


Someone else thinks that Altman was certainly doing more than just a 'day in the life of' film, and that's Roger Ebert, who said that '"Mr. A" is based on Gerald Arpino, the Joffrey's legendary director and choreographer, and that no doubt is true. But there's another Mr. A standing right there in full view, and his name is Robert Altman', (Ebert's review here). The film idea is Neve Campbell's (she joined the National School of Ballet in Canada when she was nine), but perhaps it was also Altman's method of showing us a glimpse of himself, how the problems faced by Mr Antonelli in running the company is similar to Altman's, financial constraints, the juggling of delicate egos, his uneasiness with praises (both from him, or for him), and the undertaking of a project no one else has ever tried. Despite not enjoying The Company, I do like the feeling of authenticity we usually see in Altman's films (well, not Popeye...), nothing stagey, nothing melodramatic, just a bunch of people gathered at a particular place at a particular span of time doing what would be deemed natural in the world constructed by Altman in his film. (the scene where a dancer ruptured her Achilles tendon, bringing a sudden end to her career was disturbing to me because it was shown in such a casual manner, no sad violin score or close-up of that dancer weeping in sheer agony, and everyone running into the room in slow-mo to her aid, and then cutting back to the dancer screaming inaudibly as the score continue soaring). And thanks to him, I actually have an extra idea for a project I can work on.

Anyway, I shall end this entry by asking what do YOU, my dear readers, think of The Company. Is it a lesser work of Altman? Or is it an underrated masterpiece? How about rating it from a scale of 1 to 10? Or is it the kind of movie that defies conventional methods of rating? Don't be shy, Robert Altman is asking you to speak up. 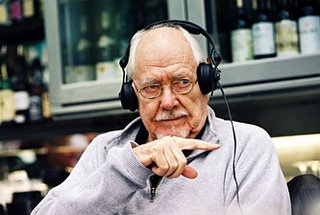