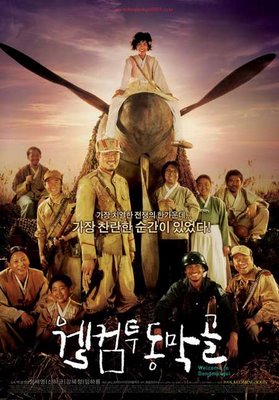 Welcome to Dongmakgol was South Korea's 2005 representative for the Oscar's Best Foreign Film at the 2006 Oscars. It also became the fourth top-grossing film of all time in Korea. However, I barely knew anything about it when I first popped it into my DVD player a couple of nights ago, remembering only vaguely a raving review from Lovehkfilm.com. All I've wanted was some quick laughs, and from the quirky-looking film poster (I thought the girl was riding on a mecha), this seemed to be one. I was pleasantly surprised when the film ended up delivering much more than just laughter, it's actually pretty good.

As Sanjuro of Lovehkfilm.com have said, this film recalls the best of Kurosawa (Seven Samurai), Hayao Miyazaki (you'll notice very quickly that this film is a homage to many Miyazaki films, actually) and Stephen Chow. Set in 1950, during the Korean War, three North Korean soldiers, the only survivors of an ambush, Commander Lee Su-Hwa (Jung Jae-Young), Private Jang (Im Ha-Ryong), and Taek-Ki (Ryoo Deok-Hwan) were led to the peaceful village of Dongmakgol by a crazy village gal Yeo Il (Kang Hye-Jung, chick from Old Boy, barely recognizable until I read another review). It became an unexpected gathering of former foes as a U.S. pilot named Smith (Steve Taschler) had just been taken in by the locals as well when he crash landed at the outskirts, along with two South Korean soldiers - Lieutenant Pyo Hyun-Chul (Shin Ha-Kyun) and Moon (Seo Jae-Gyung), who stumbled into the village by accident. 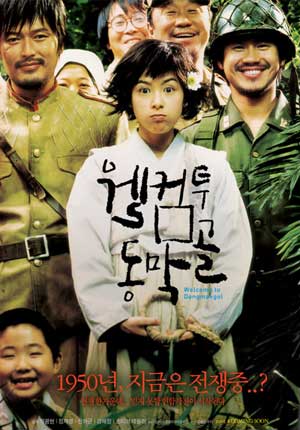 An intense standoff occurred between the South and North Korean soldiers while the villagers of Dongmakgol, who had never seen firearms before (and completely oblivious to the war), were barely affected by the weapons those soldiers were threatening to use on each other. Until, by accident, a stray hand grenade destroyed the village's food store. With that, the soldiers had to form a truce to help the villagers restock their warehouse. And as their stay in the idyllic Dongmakgol was prolonged, unexpected friendships were formed between former sworn enemies, where they can erase their sins and put the war behind them. Unfortunately, it wasn't meant to last as their past would soon catch up with them, and the soldiers will have protect the village.

Like most great Korean films I like, this is the kind of film that will make viewers laugh and cry. I was laughing endlessly throughout the many hilarious scenes throughout the film, most of all an insanely climatic and epic slow-mo battle with a wild boar (most people who have seen the film will be talking about this part), and thanks to comedy of the film, which makes the main characters very endearing (you won't expect to see the perpetually sullen Jang Dong Gun in a film like this), things became very emotional and stirring when the film underwent a dramatic shift towards the end. The final battle scene, although admittedly contrived as my friend have said (I watched this with Alex, who played Professor Alan Wong in my Dawn Yang -related webcomics), was just as spectacular as something from a big-budget Hollywood war film (*mild spoilers* we see the five protagonists taking on a fleet of fighter jets).

Film experience is enhanced by the soundtrack from Joe Hisaishi, longtime collaborator of Hayao Miyazaki and Studio Ghibli (from Nausicaa to the latest Howl's Moving Castle), the very first Japanese composer ever to work on a Korean film, Welcome To Dongmakgol illustrates an earlier era of innocence in a place uncorrupted by war, existence without conflict or violence, carefree lives of happiness and kinship. And thankfully, despite its anti-war message, it avoids most pitfalls that a Korean war film would fall into, never becoming too heavy-handed or manipulatively emo (it's affecting without having some syrupy Korean ballad SCREAMING at you to weep, thank goodness, if it has Jang Dong Gun in it, expect to see him cradling the bloodied corpse of a child, screaming in the air, oh, wait, he did that in 2009: Lost Memories).

Jung Jae-Young and Kang Hye-Jung won awards in Korea's equivalent of the Oscars for their supporting roles. But I have to say that Shin Ha-Kyun (Sympathy for Mr Vengeance, My Brother) is quickly becoming one of my favourite Korean actors with his charismatic performance as the angst-ridden Lieutenant Pyo with a tormented past, whose victorious smile during the end of the final battle is- ah well, watch it yourself.

I won't call this a masterpiece, but it's one of the better Korean films I've seen recently

Watch the trailer of 'Welcome To Dongmakgol':

Other reviews: Dilip's 2006 Cultural Event Blog | The IFC Blog | Like Anna Karina's Sweater If you have written a review for the film, feel free to leave its URL at the comments section.