I've heard of Hachiko ever since I was a child. I'm sure many have as well, the tale of a faithful dog who always waited for his master at the train station, and remained devoted even after his master's death. Returning to the station everyday just to wait for him.

Of course, I didn't really discount the authenticity of the tale then, just that it didn't seem much of a big deal to me. All my life, I have been afraid of dogs haven't been the biggest fan of dogs. So as years went by, the tale of the faithful dog

A few weeks ago, I was at Shibuya for a wondrous 'shabu shabu' meal with my friends, Ai and Iyo. Our meeting place then was, in Ai's words "the dog statue outside the Hachiko exit of Shibuya station". It was hard to miss the bronze statue since many people were gathered there, and taking photos with it. I snapped some pics as well even though I didn't know its significance then: A week later, through a stroke of sheer coincidence, we were given a piece of paper to read during Japanese language class. And it's actually Hachiko's (1923-1935) story!

My immediate reaction was: "Ooooooh! So Hachiko is THAT faithful dog I've heard about ever since I was a child!"

Quite a revelatory moment, seriously.

Unsurprisingly, Hollywood is doing a film about this called HACHIKO: A DOG'S STORY. It's directed by Lasse Hallstrom and stars Richard Gere (who is also the producer). Film's supposed to be about Hachiko's relationship with his master. Settings of the story is changed to US (of course), but I still don't think Richard Gere's character is going to survive in the film. (... duh)

(UPDATED: The film came out in 2009, you can watch the entire film on Youtube)

Here's a short scene from an old Japanese film about Hachiko. Looks like a downer.

And here's a rare last photo of Hachiko after he died. 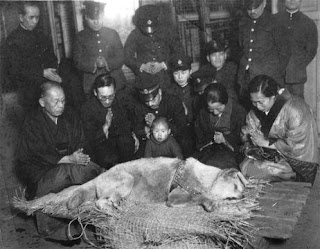