Found some long-lost photos from a 2005 trip in China! 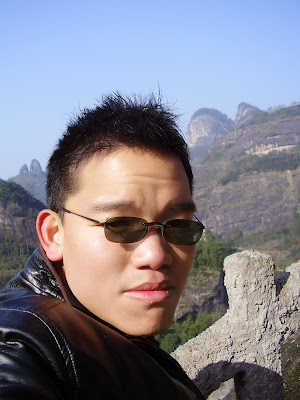 My time in Tokyo is coming to an end.

After my graduation last March, I was supposed to leave the Wakeijuku Dormitory that I had been staying since 2008. (Haruki Murakami used to stay here too!) After all, the place was meant only for students.

Clean up and clear my room. Then return to Malaysia.

But that turned out to be too difficult. Many things were left in the room before I left.

I promised them that I would come back "in a few months" to clean everything up. I came back almost a year later. The folks in the dorm were kind enough to leave my room vacant for this whole period of time.

So, right now, I am trying to put an absolute end to a chapter of my life, even though it really should have ended last year.

Spent the last few days clearing things up, throwing a lot of old stuff which, as expected, left me a little nostalgic.

I used keep many of my data in blank DVDs, I decided to get rid of this whole pile of them by transferring most of the data into a new hard disk I bought.

I was surprised that many of the data dated from 2004 to 2006, during my time in Perth. My music and movie collection. Those were the times when those films I had were in .mpg or .rmvb formats. Very low resolution. It was amusing.

My music collection surprised me a little, when it dawned upon me that I have been listening to such bands like Ego-Wrappin', Deerhoof, Arcade Fire for nearly a decade.

A few hours ago, I went through a data disc and found only photos in it. They were actually photos taken during a family trip in China around December 2005. This blog has already existed then, in fact, some of my earliest Youtube videos posted in this blog were videos of this particular trip. There were even a few heavily photoshopped photos here and here.

But why did I choose only those few photos to upload? What about the rest?

For nearly 9 years, I thought I've lost these photos!

Looking at them now, even though my photography skills then weren't as good, and I was using only a cheap Canon Powershot camera, I don't think they were that bad at all!

More and more, this blog has become a place to help me remember things. Therefore I decided to upload all those remaining photos on Facebook, and also put them here.


I went to Wuyishan, a place known for its tea.


Aside from Wuyishan, we also went to Shanghai, and stopped by at the beautiful Zhouzhuang Water Town. The climatic scene in Mission Impossible 3, which came out half a year after my trip, was filmed here.


That day in Zhouzhuang, my poor sister was battling a cold.