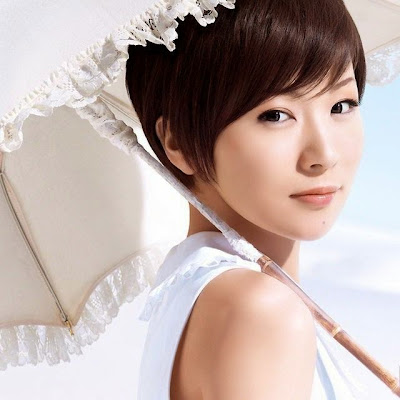 Last month, after getting hold of her two albums UKINA 浮き名 and MITSUGETSU-SHO 蜜月抄 (both albums were released to commemorate her 15th anniversary in the music industry), I became addicted to the songs of Shiina Ringo 椎名林檎 again.

I don't know why the video wasn't showing properly on my Facebook status update, but I really love her collaboration with Towa Tei, where she sings about apples.


It's odd that I haven't actually mentioned Shiina Ringo that much in this blog when her works had burrowed so deep into my life during the past few years.

(Actually, I did mention her, but only in passing, on this June 2011 post, about going through her discography after being just converted into a fan, and watching Mika Ninagawa's SAKURAN, a film that wasn't anything special aside for its killer soundtrack supervised by Shiina Ringo)

I think she's the only Japanese artist these days whom I would speak excitedly about when I meet another fan. (well, maybe EGO-WRAPPIN is another, or SOUTAISEI RIRON)

I usually need to listen to music when I write. I am disturbed by silence. So around 2011 to 2012, when I was going through the multiple drafts of a feature film script, I listened mostly to Shiina Ringo songs. The brilliance of their arrangements and compositions were immersive, jumping effortlessly from one genre to another, her distinctive nasal voice soars, it raises goosebumps, in a good way, an awe-induced way.

The film project I was writing then was challenging, I was trying something different structurally, there were numerous mentions of obscure historical events that I weaved into the storyline, occasionally embellishing them with exaggerated facts so that they would seem mythical. It felt like writing a novel instead of a screenplay, and whenever I was writing in solitude, during the dark hours after midnight, my only companion then was her voice. (It wasn't the easiest to choose the right songs for writing at night. Something too soft and slow would make me sleepy, something too loud would distract my thoughts, therefore Shiina Ringo's songs were just right!)

Maybe because of that, I am grateful. My film was never made, but many elements of it were later implemented upon my feature film RIVER OF EXPLODING DURIANS. Creativity is an organic process, constantly evolving and growing, what was special to me in a particular stage of my life would end up being mundane. Therefore the belief is always to strike when the iron is hot, instead of waiting forever for a "masterpiece", because I don't believe in "waiting".

This joy of creativity is often felt in Shiina Ringo's songs, and her albums too. Being a fashion icon, merely "listening" to her song was just part of the Shiina Ringo experience. Her high concept music videos are usually wonderful to watch, sometimes playful and ironic, sometimes beautifully designed and intricate.

I'm not going to list all of them out, but here are a few that pretty much illustrated what I've been trying to say about her. (Also, because the label had just started an official Youtube page for her, I don't have to worry about these music videos being taken down... right?)

An early music video of KUKI 茎 ("Stem"), which was a 2003 song used in the movie Sakuran. In this music video, she's in Geisha garb too. Most music videos look dated after a year or two, yet looking at this now, I cannot believe that it came out 11 years ago.


I can go earlier with the 1998 KOUFUKURON 幸福論 ("Happiness Theory") music video, and it totally didn't feel dated at all. She was introducing planking before it was cool.

And here's the music video of 2003's りんごのうた RINGO NO UTA, a song meant for a children's program. Released before her first solo hiatus. In this music video, she made references to all of her previous music videos to date. It was glorious.


2011's CARNATION カーネーション is the opening theme for an NHK morning drama (Asadora) of the same title. Maiko the Producer (of Kingyo) actually worked in this as assistant director (the drama, not the music video). It's a simple ballad, but the music video was anything but simple.


I think one reason why her music videos are so appealing to me is because of their many cinematic references and influences. She even referenced the ending of Antonioni's ZABRISKIE POINT in her AMIAMARU ありあまる富 (The Invaluable) music video. This was her first solo single in 5 years, and she didn't even appear in the music video. The audacity!


COWBOY BEBOP reference (along with many other things)


And this 2013 music video for NETSUAI HAKKAKUCHU 熱愛発覚中 ("I Have Found Love") is like a combination of Kungfu Hustle, Shaw Brothers films, Tarantino stuff... my mind just exploded.

I'm prompted to write this post because I just watched new music video SEISHUN NO MABATAKI 青春の瞬き last night (music video itself was released on May 13th). It was a song that she originally wrote for actress singer Chiaki Kuriyama in 2011, It's going to be part of her new album GYAKUYUNYU ~KOUWANKYOKU~, a "self-cover album" (basically she's going to perform songs that she had composed for other people over the years)


I think it's a good idea, and quite nostalgic for me as well. In truth, my earliest exposure to Shiina Ringo was around 1999/ 2000, the song was Tomosaka Rie's CAPPUCCINO, which was composed by Shiina Ringo. I was listening to that song almost everyday back then.


Shiina Ringo's cover of this song had been pretty badass.