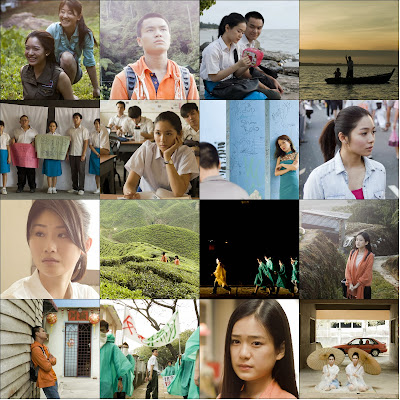 25th of Oct, a day after the RIVER OF EXPLODING DURIANS world premiere, I had two "free days" before the next screening.


Mom had flown into Tokyo so she could catch the second screening.

Post by Chik Soon Come.
There were news reports of the film after the world premiere.

The EXPLODING DURIANS leads Koe Shern and Daphne Low, and I, did an interview with Filmbizasia's Kevin Ma.


It's a very detailed interview about the evolution of Malaysian Cinema. Worth a read!

On the 26th, I decided to bravely catch the screening of Lav Diaz's 5 and half hour film FROM WHAT IS BEFORE. Maiko the Producer (she was the producer of my old short films like KINGYO) had came in from Kyoto to join us! And I got to take a photo with Rei Ayanami too! So happy!! Waiiiii!

FROM WHAT IS BEFORE is a monumental film. I'll write more about it in my next post. At night, Zhu Zhi-Ying and her assistant Strawberry had flown in from Taipei to attend the second half of the Tokyo Film Fest.

27th of October. The second screening of RIVER OF EXPLODING DURIANS was just as emotional to me. As I walked towards the stage after the screening, I realized, among the faces of the audiences, were people from my memories. Dear friends from different stages of my life, who were the main reasons why I was on stage that day.

Both my parents were there. It was the first time my mom had attended a film festival screening of my film.

So was Kai Fai, my friend since high school, who used to stay over at my place so we could write together a fantasy novel.

Then there was Justin, my dear friend from my Perth days, who introduced to me so many great literary works and authors. Italo Calvino. Yukio Mishima. Salman Rushdie. Yasunari Kawabata.

And then, the cast and crew of KINGYO, my first ever Japanese short film in 2009. Maiko, Linto, Lia, Annu, Qyoko, Luchino. The KINGYO family. We went to Venice Film Festival together, in a beautiful summer half a decade ago.

(The very classy cast and crew of NOVA aka TERBAIK DARI LANGIT, the other Malaysian film in the festival, which was competing at the Asian Future section, were at the screening as well!)

I felt nothing but love for all of them.

When the film ended, we were mobbed by numerous audience members outside the cinema.

It was another unforgettable screening.

At night, we got to go to the legendary Kabukiza Theater to catch a Kabuki performance (and a screening of Charlie Chaplin's CITY LIGHTS). Awesome bento with high-class cuisine included!

We then strolled through the Tokyo Midtown at Roppongi at night.