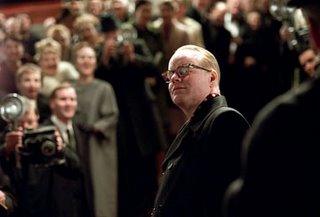 I felt disturbed when watching the biopic, Capote. Maybe it had to do with how much Truman Capote reminded me of, well, myself. Except the gay and effeminate part. Both of us are ambitious, egoistic, manipulative, charismatic, persuasive... well, the fact that I’m drawing comparisons between Truman Capote and myself in a film review should speak volumes about my ego.

Anyway, this is a biopic of Truman Capote, but thankfully, it isn't the type which begins with a childhood event and then ends with a death scene. Nope, this, like many of the recent biopics, focuses only on a pivotal event of the person's life, and in the case of this film: the six years Truman Capote spent to write the groundbreaking non-fiction book 'In Cold Blood' (he used a style which made the whole thing look like a gripping fictional novel instead of some dry report. Check out Wikipedia's entry about New Journalism) that became an international bestseller and made him, according to the film ending, the most popular writer in America.

'In Cold Blood' chronicles the murder of a family of four in rural Kansas and the aftermath, which Capote wrote by conducting interviews with everyone involved in the case, and then manipulating a great amount of information from the two killers. The most interesting moments of this film are the ones when Capote's sheer intelligence and charm are on full display. You see him charm the pants off the townspeople, the sheriff, the murderers and everyone else, and then you see him using very questionable methods to fish for information. In the end, you'll either feel awed by him, or disgusted, or a mix of both. Hell, you might even feel sorry for the convicted murderers who got manipulated by Truman like that.

It is entirely up to you to decide what you think of Truman Capote, this film doesn't tell you what you should think, all it does is show his personal dilemma, the conflict between his obsession to finish his book and his compassion for his subjects. After all, Capote was obviously orchestrating the outcome of the trial so that he could finish the book earlier, yet he was somewhat affected by the sincerity shown to him by the murderers.

Ultimately, this is a pretty simple film, yet effective because of Philip Seymour Hoffman's performance. Being the hot favourite of the upcoming Oscars, I'm glad to see him finally getting some attention. It's his performance itself that drew my mom into watching the film from start to finish even though it usually ain't her cup of tea, so yes, he deserves the accolades by being able to impress the mother of the Great Swifty. (although, to be fair, this IS a much showier role compared to Heath Ledger's in Brokeback Mountain, and one can still argue that Philip had an easier time since he could draw references from the real Capote's mannerisms and such whilst Ledger's performance came entirely from his own imagination, but I'm not dwelling into that). As for Catherine Keener, who got nominated for a Best Supporting Actress award as Harper Lee, I know this sounds crazy, but I think she deserves it more with her role in 40-Year-old Virgin than this one. Hmm.

So yeah, I've told you what to expect from the film. It's not mindblowingly great, but it kept me riveted. and I think it's impressive that this is director Bennett Miller's feature film debut. (his previous work is an Emmy- winning documentary, which might have helped him much with this film). Information about In Cold Blood here. Information about Truman Capote here.