I spent the last few years doing my degree on Marketing Management, not entirely something I liked to do, but I did for practicality's sake. My minor was English Literature, to serve as a refresher to my course. Business units, for me, were always dry and boring, thus I needed something interesting from the literature units to challenge my mind, and constantly dove into my filmmaking and writing endeavours (like this site) for the sake of reducing the numbness I get when doing a business course.

But that ended last year. I've already finished my degree since then.

I'm currently doing my Postgrad Diploma on Media Production, and I can finally do the things I've been wanting to really do for years, like filmmaking. And yeah, you might have seen me posting about my adventures during the past few weeks.

However, I finally had my graduation ceremony tonight (or rather, last night, 13th of March, 2006), and for the first time in my life, I was dressed formally, how utterly awesome. Of course, unlike everyone else who were there, I wasn't exactly in a festive mood. They have really graduated (and have embarked upon a new chapter of their lives), yet I still need to go for classes the day after the ceremony. I'm still stuck in uni for a year to pursue my dreams.

There was a moment near the end of the ceremony when everyone except for the graduants were asked to stand and applaud, celebrating the efforts and achievements of all graduants. It was pretty spine-tingling. I shall post photos of me in the graduation gown... if they don't look too stupid. And I'll post videos of it too, once I can find a place where I can upload my videos. GAH.

To recognize this significant moment, I shall post a gorgeous photo that I took of myself after I returned from the graduation ceremony. Man, I'm such a hunk. I certainly look better than I did two weeks ago at Sony Tropfest... man I was FAT! (or maybe my lady friend is just too skinny...) 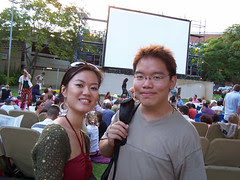 Now, on an entirely unrelated note. A week has passed since my birthday, when Crash beat Brokeback Mountain on one of the biggest upsets in Oscar history. Much have been written about this travesty. Some condemned the Academy for being conservative homophobes (which, according to Academy president, is a silly accusation), even Stephen King (who had believed that Crash would win all the while even though he felt that Brokeback was the superior film) was asking everyone to let go and move on.

I personally believe that the likes of Brokeback Mountain and even Munich would be remember longer than Crash even though Crash was the much easier film to watch (someone called it 'dark', but give me a break, almost everyone had a happy ending, it felt more cheery than depressing in the end, like the substories of that dude with a daughter and her invincible cloak, Sandra Bullock ("I once hate people with different skin colour, but I've now learnt my lesson, boohoo"), Terrence Howard, Thandie Newton (I paraphrase this from a comment I saw on a blog entry: "Honey? You know the cop who molested you last night? His young partner saved my life today!" "Really? The cop who molested me last night saved my life today too!"), Matt Dillon ("I was an asshole, but I just became a hero, and I'm really not an asshole, just frustrated with dad's condition!") etc. Hey, I liked Crash too, after seeing it, I told my dad that he HAS TO see it! And I was even rooting for Matt Dillon to win the Oscars. But never have I ever thought of it as Oscar-winning material. Of course, someone made an even more scathing accusation after the Oscars.

"Hah! Look at the irony. By awarding an anti-racist film, the Academy had just shown how racist they are by shunning a film directed by a Chinese!"

The person who made that comment was me, unfortunately.

Yet someone else had more to say about Brokeback's loss during the Oscars. Annie Proulx herself. Yes, the author of the Brokeback Mountain novel (yes, to the uninitiated, the film is based on a book) had LASHED OUT AGAINST THE ACADEMY! It's certainly rather unexpected. But amusing, go read her article! I've never seen something like this before (... an author being so pissed off that a film adapted from his or her novel failing to win Best Picture oscar). I do agree with what she said about Hollywood's love for mimicry. Too many acting awards have been given to people in biopics during the past few years (Julia Roberts, Reese Witherspoon, Cate Blanchett, Nicole Kidman, Charlize Theron, Jamie Foxx), it's just pretty freaking ridiculous. Hell, almost every year, someone in a biopic is nominated for the acting awards.

"Hollywood loves mimicry, the conversion of a film actor into the spittin' image of a once-living celeb. But which takes more skill, acting a person who strolled the boulevard a few decades ago and who left behind tapes, film, photographs, voice recordings and friends with strong memories, or the construction of characters from imagination and a few cold words on the page? I don't know. The subject never comes up. Cheers to David Strathairn, Joaquin Phoenix and Hoffman, but what about actors who start in the dark?" - Annie Proulx


"In two decades of writing about movies, I have never heard such bitching and moaning and griping about a film not winning best picture. Enough is enough. You lost. Try to handle it with some grace." - Richard Roeper

If there is this one day when I'm nominated for some major awards, and lost out to somne other film, and I can get this kind of hardcore support from my friends. I don't think I even need to win the big ones anymore. More on my filmmaking adventures in my next few entries.