Now Everyone Knows My Fear For Dogs "My hatred for dogs extend to cartoon characters. I hate Goofy and Pluto because they are so freaking annoying. And I think Snoopy's a pretty condescending son of a bitch, even though he IS literally one. And Scooby Doo, goddamn Scooby Doo and his stupid cry, I can't freaking stand him."

"I hate dogs. I am supposed to be a manly man, but they made me seem unmanly, man. They make me feel exposed and vulnerable."

"When I was a toddler, and I wanted to get out of my house, my nanny told me that if I do thus, I would be eaten by dogs. Well, even if I don't believe that I'll be eaten by dogs now, I feel that they can still bite off my fingers easily."

"Crazy rottweilers. I remember reading the news about how this old woman was beaten to death by some crazy rottweiler many years ago, I never looked at the same way again."

"I always thought that by revealing my fear for dogs to a woman, she will appreciate my soft and sensitive side, and hopefully share this trait of mine as well, so that they would invite me home and that we can then... discuss about our mutual fear. Unfortunately, this had never happened."


And here you are, some choice quotes from my interview in a self-reflective documentary I was doing today with the other postgrad diploma students. An interesting experience. Although I felt that I've put so much weight compared to last year that I don't look that good on camera anymore. I'm vain, I know.

I've never been involved in a documentary production before, and neither have I ever used THAT many filming equipment in my life either! To use lighting equipment, an actual professional-type camera, a boom mic, whoa! In the past, all I had was my trusty little camera, with a flashlight (and an add-on camera light) for lighting. It was the most economic method of filmmaking, yet now, I have access to these babies! They are currently in my flat, here's a photo of them. 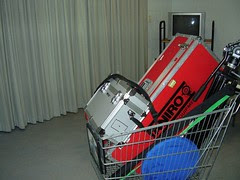 Yes, your eyes aren't deceiving you, the stuff are in a shopping trolley, and the shopping trolley is in my living room. Basically, the concept of this documentary I am doing is about me and three others voicing our fears. As it is a self-reflective documentary, we take turns as cameraman, director, sound person and interviewee (or actor?).

But to make things more interesting, after we voice out our fears, we are supposed to CONFRONT our fears, Fear Factor-style. Right, so, I have to actually touch and feed a dog, while another girl, Cat, who is afraid of the dark, will be tossed into a dark room until she loses her shit, while another, Pam, who has this unexplainable fear for snakes, will have to actually stroke a snake. I wonder whether it's possible for her to be as hardcore as my little sister? (pic below) 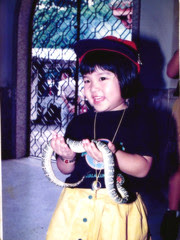 I am currently filming the progress of producing this documentary (which means that I have my camcorder set up behind the video camera filming the documentary), so I'll put it up when it's done. ONCE I can upload my videos.

As for my personal thoughts about documentary... well, they definitely ain't my cup of tea, I don't see myself possibly making a documentary in the near future. A mockumentary is possible, but a documentary is something that can only be done if there is something I strongly believe in that I want to chronicle, or investigate. But what can that be? Hm.

Speaking of filmmakers who shifted from drama to documentaries, I am currently looking into German filmmaker Werner Herzog (who made last year's critically-acclaimed Grizzly Man, which many believed should have been nominated for the Oscars). Not really sure about his background, I'm just starting to collect the five movies he had made with Klaus Klinski (I have Aguirre and Fitzcarraldo thus far, I also have Mein leibster Feind for reference's sake, haven't watched either of them). I'm eager to see what their fabled partnership is all about. Will watch Aguirre later tonight.

Anyone else who has seen stuff by Werner Herzog? What are your thoughts about him and his movies? Any recommendations? And good sites about him you can direct me to?