Re-cycle 鬼域 by the Pang brothers 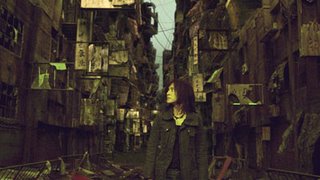 Re-cycle (鬼域) marks the reunion of the Pang Brothers (Oxide and Danny Pang) and Malaysia's own Angelica Lee Sinje since their 2002 breakthrough hit The Eye.

There had been numerous accusations against the Pang Brothers for constantly flogging the dead horse because their collaborative efforts after The Eye consist solely of, well, sequels to The Eye that are of varying qualities (The Eye 2 and The Eye 10, both I didn't see). But these two guys are really pretty good at what they do, and that's building tension, adding suspense, creating an ominous atmosphere, and well, wringing an effective performance from Lee Sinje.

Story's about Ting Yin (Lee Sinje) who chooses to dabble with the horror/ supernatural genre after the success of her romantic novels, and then, weird spooky stuff starts happening at her home while she's writing, like finding strands of tremendously long hair on the floor (that obviously don't belong to her), receiving weird phone calls, catching glimpses of weird shadowy figures lurking behind the glass. The first half of the film is very much like your generic horror film, albeit one that works well enough with their 'boo' moments to nearly jolt me out of my seat.

But after that, the film veers towards an entirely different direction as Ting Yin finds herself stumbling Alice In Wonderland-style into a dark fantastical world of undead creatures, lonely dead souls, desolate buildings and wasted landscape that bring to mind elements of an Escher painting. With the help of a mysterious little girl (Zeng Qiqi) and an old man (Lau Siu-ming), Ting Yin attempts to escape from this strange world that is of her creation, and is forced to confront something she did in her past.

Not much of a story, and most of the film's a one-woman show for Lee Sinje, but I was seriously struck by how visually stunning this film was. A gigantic ferris wheel sandwiched between two apartment buildngs, a mountain of discarded giant toys, a slimy tunnel of fetuses, a narrow bridge of wandering zombies, a beautiful field of golden flowers, Re-cycle features some of the most impressive visual effects (definitely better than the overbudgeted crapfest The Promise) and production designs I've ever seen in a Hong Kong film. Many reviews complained about the fantastical elements during the second half of the film, but for me, I actually started liking the film at that very moment. After all, I don't remember ever seeing another HK film that's like this.

The film shifted from a horror film to a chase film, and then to a travelogue. When more was known about the fantasy world, I ceased remembering that Ting Yin was actually in danger and just started enjoying the strange and bizzare sceneries that she encountered in her adventures. There are some twists in the end that I saw from a mile away, yet revealed in such an emotional and affecting manner that my cousin, who saw the film with me, was reduced to a sobbing wreck. The film is definitely more emotional those The Eye films towards the very end. So check it out, it's a good film.

Watch a 'making of' video clip of Re-cycle:

Footnote: One thing that struck me most, however, was how similar it was to my upcoming short film, Girl Disconnected, in terms of structure in the second half of the film, just that Re-cycle is more like a dark fantasy (it's possibly similar to something from Clive Barker, I guess), filled with grotesque images and ghosts, while mine, a love story with fantasy and sci-fi elements, is more light-hearted and whimsical, without the scary stuff. Yet both are presented like a travelogue, where the protagonist has to go from one place to another in an alien land based on the clues given to her. Ting Yin in this film seeks survival, Maya, protagonist of my Girl Disconnected, seeks romance. Now, let's just see whether I can pull mine off in fifteen minutes, and with a much MUCH smaller budget (what a tremendous understatement).

Go read more of my other film reviews.