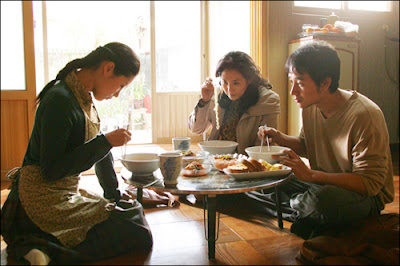 I knew nothing about Kim Tae-Yong's Family Ties, but was spurred to watch it due to Koreanfilm.org's (mostly) positive review. While it is called Family Ties in English, I believe its more literal translation is The Birth Of A Family, a title which seems initially meaningless until I gradually realized what was this ensemble film about, and it's really cleverly constructed, but I'll try to keep things spoiler-free.

Instead of really telling a story about different members of a large family as I've originally expected, this dramedy is a little like an omnibus, with three different stories playing after one another, and these seemingly unrelated stories turned out to be, well, related in the end.

The first story is about Mira (Moon So-ri), an owner of a restaurant, whose idyllic life was shattered when she was suddenly visited by her ex-jailbird younger brother Hyung Cheol (Eom Tae-woong) and his MUCH older wife Moo-shin (Ko Doo-shim). Lots of awkwardness occurred (hey, imagine what would happen if YOUR brother married someone who is old enough to be your mother), made worse when Mira's fiance was verbally abused by her emotionally unstable brother during dinner.

Suddenly, Moo-shin's ex-husband's ex-wife's CUTE little daughter (confused?) turned up. And Hyung Cheol disappeared just as abruptly as he appeared, leaving Mira, Moo-shin to their unknown fates. I liked the end of this particular segment, when the film became surprisingly poetic, the passage of time represented by two unmoving women eating their dinner, oblivious to the sight of a little girl dancing, waltzing, running and playing with her dog at the courtyard outside, amidst the unending cycle of day and night. That moment made me went 'whoa'.

Second story is about a quick-tempered tour guide Seon-gyeong (Gong Hyo-Jin, who was absolutely electrifying in this role) furious with her former boyfriend appearing at one of her tours with his new girlfriend, and also the fact that her mother Mae-ja (Kim Hye-ok, fantastic too) was having an affair with a married man, and having a child from the affair. Desperate to move abroad, she suddenly received news that her mother was terminally ill. And what would happen to her young half-brother?

One absolutely amazing scene was the one where Seon-gyeong attempted to humiliate her mother's married lover by visiting his home, and confronting him in front of his family about the affair, and asking whether he loved her mother. To her surprise, he actually said yes very calmly, ignoring the possible consequences they would bring to him and his family (and being an understated and subtle film, we never had to go through the pains of watching what happened to him). The characters are always more complex than initially imagined. And another scene that I liked was when Seon-gyeong attended her half-brother's sports event in his kindergarten.

The third story is about a young couple, Kyong Seok (Bong Tae-gyu, last seen in Ssunday Seoul as that poor tormented teen wolf) and Chae-hyun (Jeong Yoo-mi) and the problems they faced. His cool, loner attitude clashing with her over-affectionate attitude, as he became increasingly annoyed (and jealous) at her penchant to help her friends, and compromising the time they would've spent together.

Something I could really relate to, and actually experienced, not too long ago.

The third story is the one that reveals the connection between all different stories, so I'm not going into further detail, if you have the chance, search for the film yourself.