Last Friday, while I was at Perth city, I saw a sign in Dymocks bookshop telling me that Jasper Fforde's coming for a book signing session on the 22nd of September. Excited, I took a photo of the sign with my mobile phone, as a reminder. 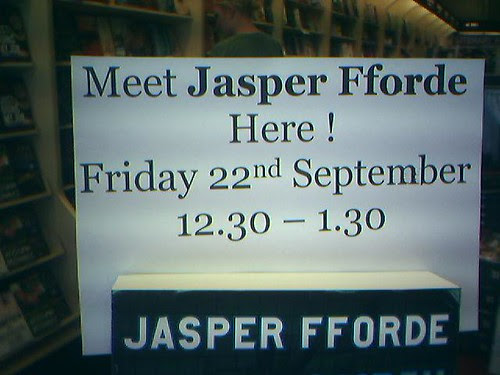 And today, I left classes early (after showing people an awesome one-minute preview of Girl Disconnected I shot last night), catching a bus to Perth to attend my very first book signing session*. Trying to catch a glimpse of Jasper Fforde, whose Thursday Next books (I've only read three though) I like verily.

Of course, when I reached Dymocks, people were already lining up getting their books signed. I looked hurriedly at the stocks, trying to get a Jasper Fforde book I haven't had for his autograph. The fourth Thursday Next book, Something Rotten, was out of stock. The first book from his new Nursery Crime Division series, The Big Over Easy, wasn't to be found either.

Only the first few Thursday Next books, which I already had, and his latest, The Fourth Bear, which was sold for 33 dollars.

I ran off to the Borders (a regular hangout place for me these days) nearby, desperately trying to find myself the other books. Alas, they were all sold out as well, except for The Fourth Bear, which was also sold for 33 dollars. Noting that lack of differences in price, I sprinted back to Dymocks again.

Got myself a copy of The Fourth Bear, haggled for a discount (there is a long-forgotten student discount where all students get a 10% for anything they buy once they show their cards, apparently everyone has forgotten about it until I mentioned it). And then went to have my copy signed by Jasper Fforde as well.

We spoke briefly. I told him that I'm from Malaysia, and he told me that he actually stopped by Singapore for his book-signing tour, and also signed for the Malaysian market. (I wondered briefly how many other people in Malaysia are into his books, give me a holler... please?) Couldn't speak more since there were people behind me.

Oh, and I took a photo with him too (of course!) with my cellphone. 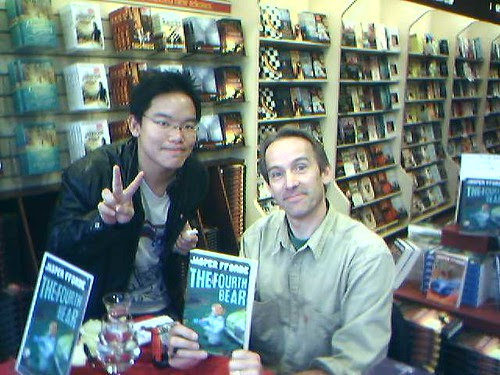 Right, and here's a photo of my autographed copy of Jasper Fforde's The Fourth Bear. See? It's for 'Edmund Yeo'! 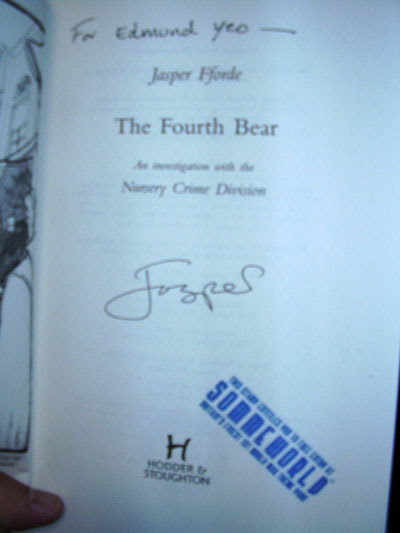 I showed Justin the book excitedly after I went home, telling him that THIS could be his future (if he doesn't use the veil of anonymity for his future writing career as he had long planned). Book-signing sessions, photos taken with excited fanboys, and said fanboys telling his friends about these book-signing sessions. Ah, the joy.

I'm going to quote the Wikipedia entry about Jasper Fforde for those who have no idea who I've been talking about all these while.


"Fforde's books are noted for the number of literary allusions, wordplay and the tightly scripted plot, and also the impossibility of deciding which genre they fit into. The simple answer is that they don't, although they all have elements of metafiction, parody, and fantasy. However, it does help to be widely read, especially with the Thursday Next books, set as they are within a police department that fights crime against literature. An example is this exchange between Next and her father: "That's a hell of a catch.""Second best there is". A reader not knowing the work of Joseph Heller may well miss the reference to the novel "Catch-22". This understanding that Fforde does not signpost all the jokes because the reader is intelligent and knowledgable enough to 'get it' follows the same idea as in the work of Terry Pratchett ("Who do you want to be remembered as the greatest horn player ever, you or some felonious monk?").

Fforde should also be noted for his use of the internet to add a different level to the books at ThursdayNext.com. He talks directly to his fans through comments on the Fforum, which has attracted a small community producing parodies and nonsense roughly connected to the 'Nextian Universe'. This is an alternate reality where the Crimean War is still being fought in 1985, the death of Winston Churchill at an early age (possibly due to Time Guerillas changing history) led to Britain being invaded by Nazi Germany before liberation in the 1950s, and where cloning is commonplace with Thursday sharing her world with dodos, thylacines, woolly mammoths, and neanderthals.

Another way to engage readers has been through the insertion of rogue postcards into copies of the books which now sell for not inconsiderable sums, as well as guerrilla signings, which often confuse purchasers of his books."

(I DID get a rogue postcard of a Ginja Assassin from him!!!!)

His books are definitely worth reading, but you can only enjoy them most if you're a hardcore book lover into those literary classics. When I first picked up 'The Eyre Affair'**, the first Thursday Next book, I haven't even read Jane Eyre before, and I had to do a quick research on the Jane Eyre story before I could proceed with reading the rest of the book. See? Who says fanfics*** are bad?

So, anyone else who has read Jasper Fforde's books?

* Despite having not attended a single book session, I do have two autographed books, one is Mick Foley's Foley Is Good, the other is Chris Welles Feder's (Orson Welles' eldest daughter) 'The Movie Director', a book of collected poems. Both are acquired through friends of my dad.

** quick summary of 'The Eyre Affair': In the alternative world of Thursday Next the heroine, the novel Jane Eyre actually has a sad ending, unlike ours, and then, literary detective Thursday follows the villain into the text of Jane Eyre, and during her mission, she accidentally alters the ending into the happy ending we all know and love, yeah!

*** Characters of pre-existing literary works do appear in Jasper Fforde's works, which makes him pretty much a fanficcer as well, as noted in a comment on one of our older entries... you know, the famous one where Justin posted a rebuttal against fantasy writer Robin Hobb. Of course, the more rigid anti-fanfiction body will say that Fforde's forgivable because he is writing about, well, characters that belong to a public domain, or maybe a more twisted argument that his works cannot be considered fanfiction because they are published. Damn, I hate people who hate the very existence of fanfiction. But this is unrelated, so I'm not going to dwell into that.
Tags: literature, books, author, jasper fforde, thursday next, jane eyre, perth, dymocks, borders, flickr, photo, robin hobb, fanfiction
Email Post
Labels: Literature