So yes, just as I've mentioned here, I went to Filmmakers Anonymous 2 at the Central Market Annexe last night for the Malaysian premiere of my latest short film, Girl Disconnected.

It was an interesting experience watching my film again on a big screen. It was first screened at Murdoch Uni in Perth last December, but unlike the rushed version shown then, the Girl Disconnected I submitted for last night was pretty much the definitive version that I'm satisfied with (I did some re-editing at the last third of the film, slightly increasing its running time, changed some music during my trip in India earlier this month, and had been working non-stop on it in the few nights leading up to the Filmmakers Anonymous 2 gathering... hence the lack of updates on the blog lately)

Of course, one of the worst things about being a perfectionist is that some of the teeny weeny flaws would bother me greatly. During a ballerina scene towards the end of the film, I almost gasped in horror when I noticed I made an embarrassing editing goof where I didn't manage to cut off a split second of unwanted footage. For a while, I got really scared that other people at the screening would notice my mistake too.

One of the most pleasant surprises was seeing my old friend, Kai Wen, who really managed to make it to the screening, and Danu, a friend of mine I met at Murdoch Uni whom I haven't met for a year since her graduation. 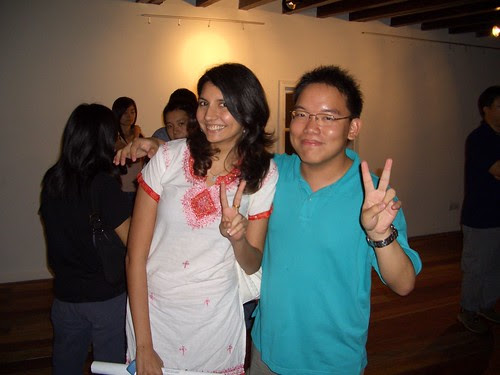 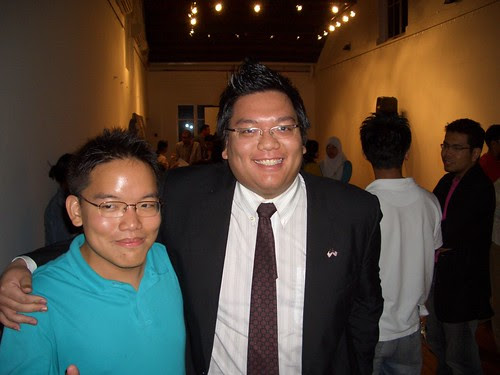 Kai Wen and I

But anyway, here are some brief thoughts about the films screened last night.

After Girl Disconnected ended, I received a text message of congratulations and compliment from Chewxy, who was sitting a few rows in front of me with his friend, Abel.

I replied to his SMS message... and ended up missing the (really) short film screened right after mine, Taking Precautions. Sorry, Audrie, girl who shares my surname, didn't know the film was only a little more than a minute.

Taking Precautions by Audrie Yeo (not related to me)


Hello Goodbye was best described by Chi Too himself, whom I spoke to during the Q & A session. "Yeap, it's the masturbatory one". It's a five minute experimental short film where you see two split screens showing railtracks during a LRT (Light Rail Transit train) journey.

Hello Goodbye by Chi Too


Lost and Found, a documentary about a foreign student who lost his shoes, only to find it being sold at a night market, and being totally helpless about it. It's well-paced and amusing, the issue is pretty thought-provoking, was a bit bothered by the sound mixing though.

Then there's The Blind Girl and The Thief, which has a really unique, stylized look where the actors are blended with painted backgrounds. It's pretty heartwarming and crowd-pleasing.

The Blind Girl and The Thief


The critically acclaimed documentary Aunty Wahid brings us deep into the life of a Malaysian transvestite, who dealt with all kinds of hardships in life and society's prejudice. Poignant, funny, disturbing and ultimately uplifting. It reminded me of a Murdoch student production my friends were involved in last year about a drag queen in Perth, but this one didn't hold its punches, and that's why it's so good.

This Sweet Refrain is a music video. It's pretty surreal. A parody of karaoke videos. Had some guy (Chi Too) frolicking with a chick wearing a fish head. There was a major loss in the image quality, I think it was a VCD playing at the screening instead of a DVD. Or was that intentional too?

When talking to Fairuz during the Q & A session, I mistook him for the director of Taking Precautions, and told him apologetically that I didn't watch his stuff. Oops.

This Sweet Refrain by Fairuz Sulaiman


I enjoyed Red Drawing by Margaret Bong for its quirkiness and its, ah, genuinely nostalgic portrayal of Chinese primary schools, even though I had trouble understanding it. I mean, I kinda did, but at the same time, I kinda didn't either. But I'm interested in seeing Margaret's future works.

Kg. Chubadak has a pretty strong political message. The video shown contradicts the voiceover (an end-year speech by the Msian prime minister) that is playing over it. Which is meant to be ironic.


Yeah, my thoughts are brief. If you want a more elaborate review of each short films, please check out Chewxy's post instead.

(UPDATE: February 27th, 2007) DMJ, long-time net pal who happened to be the one who asked me the questions that night (... I didn't recognize her), posted her review of the FA2 short films too.

The video at the beginning of this post is shot during the Q & A session after the screening. Despite its unflattering angle, it managed to capture me, ah, launching into my looooooong speech when finally being asked a question. The one in the video, of course, is the (much) shortened version, I think I spent 10 minutes answering two simple questions.

Ah well, there you go, the Great Swifty Speaketh. :D

(Read this post of mine about the first Filmmakers Anonymous gathering, along with some of the screened short films and my videoblog)
Email Post
Labels: Girl Disconnected Videos