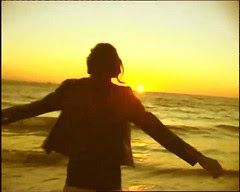 Yes, after being screened at FILMMAKERS ANONYMOUS 2 (videoblog here, watch me babble non-stop about my film, includes snippets of the film itself) on February and MALAYSIAN SHORTS on March (videoblog here, watch me babble less about my film, and watch famed Msian filmmaker Amir Muhammad presenting the films), my short film, GIRL DISCONNECTED, is going to be screened at KL JAM ASIA this month (... er, wow), which, I believe, is a special REPEAT SCREENING of FILMMAKERS ANONYMOUS 2. (FILMMAKER ANONYMOUS and CINEJAM are sister events/ close allies/ best friends etc.) tonight (12th of April), at 9:30pm.

It's unlikely for me to attend the actual screening since I'm having dinner with some family friends (where I will seize the opportunity to convince this friend of mine to be the main guy in my upcoming short film), but I'll see whether I can make it to the Q & A session after the screenings.

(of course, even with my absence, enthusiastic viewers eager to know the secrets behind the romanticism and poetry of my last short film can always leave their questions here)

I will now copy and paste the line-up from CINEJAM's site:

While CINEJAM hunts heads for its next gig, Cinejam's best friend,
FILMMAKER'S ANONYMOUS, invites you for a special repeat screening of
their February session:

This is a by-invitation event, so please RSVP to alda@Stellarentertains.com
before Thursday of this week. Entry is free, but we are grateful for
donations!

If you are a film addict yourself, please feel free to bring a DVD
copy of your film to the screening and pass it to us.

Synopsis:
A young woman takes a train to the moon to seek her Internet love.
She is accompanied by her platonic male buddy/ sidekick who secretly
loves her. Throughout their journey, they meet all sorts of strange
denizens of the moon, an eccentric gardener who speaks in rhymes,
Chang-er the Moon Goddess, ballerinas who dance for an eternity and a
mysterious rabbit fairy who seems to be pop out everywhere.

Director's Statement:
Can still be considered a 'work in progress' as there is still a
desire to tweak with the film in the future. Made with a shoestring
budget and a crew of three (including myself), Girl Disconnected is
the final project of my Graduate Diploma course I wrote, directed and
co-produced. Story revolves around the themes of unrequited love,
mortality and loneliness. Nominated for Best Screenplay and Best
Visual Effects at the NASS Awards 2006 (Open Category).

Director's Profile:
Edmund 'Swifty' Yeo had just returned from his studies in Perth last
December. Initially a self-taught filmmaker, he made a few short films
with friends just for fun, but ended up taking a Graduate Diploma
course on Media Production during his last year in Australia after
finishing his degree for the sake of sharpening his skills and
fulfilling a lifelong passion. In addition to writing and filmmaking,
he is also a videoblogger.

Synopsis:
About the precautions a women in the mere future should take, if the
misuse of technologies in exploiting women's right, continues.

Director's Statement:
The purpose of this short campaign is not asking women out there to
take precautions as such, but instead, to think why women should
resort to such silly precautions and not come together to stop the
misuse of technology… the funny thing is, when we were shooting this,
it feels like we are the bad guys…

Director's Profile:
Audrie started involving herself in filmmaking when she was doing her
diploma in 3D animation and visual effects. Although not majoring in
film making, that became her true passion. Still new in this field,
she constantly looks out for unusual inspirations and ideas to create
her own style of story telling.

Synopsis:
A study on the mobility of time and space.

Director's Statement:
Eventually, I'll have to say hello to goodbye.

Director's Profile:
Chi Too sometimes makes films for fun, love, and activism. His films
have traveled to various film festivals around the world. He one day
hopes he can travel the world like his films do. In his spare time,
chi too ekes out a living editing video in hopes of financing his
dreams of becoming a
filmmaker/photographer/writer/artist/environmentalist/escatic. chi too
is also a capitalist marxist, however, he is not ashamed of his
penchant for McDonald's and Starbucks coffee. See Chi Too in action at
http://hyperbolica.blogspot.com

Synopsis:
Based on a true story of a foreign student who had a berserk
experience while studying in Malaysia. The issue in which seems to be
so less cared, still affected him in many ways. Lost and Found depicts
a story based on Human Rights. Did you lose it? Or are you still
looking for it?

Director's Statement:
The film is about an experience that turns into an idea and comes out
as a story and then ends with a question mark.

Synopsis:
Story about a blind girl and a thief who didn't realise that they
need each other more than what they can see.

Director's Profile:
Born & raised in Cheras,KL. Studied multimedia where interest in
video making sparked. Made a few shorts like Halun & Halus where Halus
was shown on RTM1 in the program Generasi Digital. Now working in a
production house as freelance editor.

Synopsis:
'Aunty Wahid' is about the life of an unconventional transvestite,
who lives life passionately, and full of determination. Follow him on
his journey as he struggles to find out his true self, overcomes
painful obstacles in seeking acceptance, and finding a place to stand
in a prejudiced society.

Director's Profile:
24 year-old Umi is a final year student of Center for Advanced Design
(CENFAD). Graduating in December, she is currently doing her
internship at Motion Effects Studio. Her documentary Aunty Wahid won
the Best Art Work in CENFAD and shown at Malaysian Documentary and
Freedom Film Festival.

7. Fairuz Sulaiman: WHERE IS MY INDIE ROCK DARLING (3mins/color/music/2006)

Synopsis:
A film about the ever continuing search for reason and purpose in life.

Director's Statement:
This is the director's first attempt at music video making for a
local indie band. It's a simple story on how we must not give up on
our search for something, because we will never know what will happen
next. The production shoot was for 2 days, spanning across familiar
locations in Kuala Lumpur.

Synopsis:
Fo You, a 10 year old boy, grows up in the theatre of his
grandmother's Chinese Opera. He amazes his teacher by drawing the
first act of each opera that he ever forget.

Director's Profile:
Margaret Bong, born 1981, has a Degree in Cinematography from
Malaysia University Sarawak (UNIMAS) and a Diploma in Broadcasting.
The filmmaker has been involved as director, writer and producer for
the following films: Tudtu (short documentary), Lie Beneath (short
fiction) and Red Drawing (short fiction).

Synopsis:
Selepas 50 tahun merdeka, inilah nasib kaum miskin kota atas nama
pembangunan After 50 years of independence, this is the fate of the
urban poor in the name of development.