Early in the morning of 29th of December 2007 at Ipoh, an elderly woman was attacked by two snatch thieves trying to take away her handbag. It happened only a few blocks away from her own house as she was returning from her daily gathering with friends.

There was a struggle.

The leather bag was ripped apart, revealing nothing inside. The two snatch thieves sped off in their motorbike, the woman fell facefirst onto the ground.

An Indian woman and her brother were nearby and they helped her up, the old woman's nose was already bleeding profusely and semi-conscious. Another woman recognized her and hurriedly, the trio brought the old woman back home to the son and daughter-in-law she is staying with.

That old woman was my grandmother. 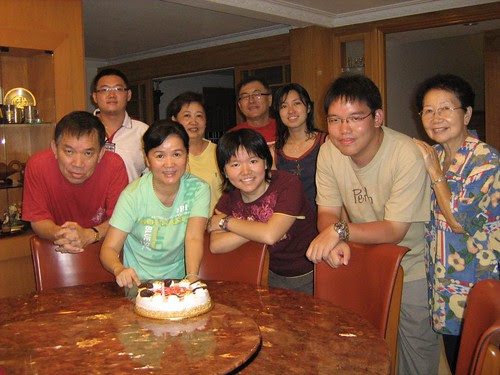 
My mother received the panicked phone call from my auntie Soon Mui (her elder sister) about this incident yesterday morning shortly after we had breakfast. They were at the clinic, my mother asked them to send my grandmother to the Ipoh Specialist Centre immediately.

The details we got were vague, and at that moment, we underestimated the severity of the situation.

All I knew then was that she was attacked by snatch thieves and fell during a struggle, injuring her leg (she was unable to walk when the kind people helped her home).

My mom decided to drive to Ipoh immediately to see my grandmother (it's a 2-hour ride away from Kuala Lumpur), my sister and I followed, we also brought Cousin Fung Ming (she's Auntie Soon Mui's daughter) along. Dad was away for an appointment.

While we were in the car, from the subsequent phone calls my mom made, we got more details about the situation.

My grandmother couldn't recognize people around her anymore, and she was mumbling incoherently. It was trauma, and also that she had injured the left part of her brain during the fall, thus affecting her speech.

It also didn't help much that my grandmother suffers from Alzheimer's. I believe she has already reached the middle stage of the disease, constantly having short-term memory losses. Sometimes she can't remember things that happen earlier in the day or the night before, and she can watch the same episode of a drama series over and over again without realizing that she had already watched it. She had already forgotten that two years ago, she had visited me in Perth, or why was I even in Perth.

I have already accepted the fact that she is slowly fading away from us. But I could take comfort from the fact that everyday for her is a happy one.

Yet what happened to her made us seethe in anger during our journey to Ipoh. Towards the cowardly snatch thieves, who I wished would suffer a fate ten times worse than hers. Since when had our nation became so messed up that even innocent old women can't venture few blocks outside her house alone in the morning?

Why did she have to go out by herself? Why didn't she ask anyone to accompany her? My grandmother had always been too considerate. Despite her condition, she would rather help others than to trouble others into helping her. And thus something like this happened.

She was in the ICU when we arrived. Our uncles and aunties and cousins were waiting outside the ward, my grandmother needed a 24-hour observation. Either things would stabilize, or we would have to prepare for the worst.

Some cousins were in tears, some uncles and aunties were holding back tears. Previous family dysfunctionality was put aside, grandmother's well-being was in everyone's minds.

Only 2 visitors were allowed each time into the room. So my mom and Auntie Soon Mui entered first, my sister and I followed and could only stand in the distance to look. Grandmother was awake when mom stood beside her, and she vomited. My mom called for the nurses, who hurried bring along tissue papers and plastic bags for grandmother to use.

My sister and I were then asked by a nurse to leave the room first, to wait for our turn. I felt Cousin Hing Yip (he's Cousin Fung Ming's younger brother) placing his hands on my shoulder, he was devastated, he needed the feeling of warmth from another as comfort, perhaps. Cousin Fung Ming placed her arms around a younger cousin sister of mine, allowing her to cry in her arms.

Mom came out, teary eyed, and asked us to enter, telling us that grandmother wanted to see us now.

We went and stood beside grandmother. Many have praised my grandmother's beauty, saying that she looked years younger than her actual age, and that essential, my mom had inherited this 'youthfulness' from her. Yet the old woman lying on the bed whose cold and clammy hand I held was pale, her hair grey, and her eyes swollen and puffy.

Grandmother seemed to acknowledge our presence when we both tried to speak to her. She was trying to speak, but what came out of her mouth were gibberish and incomprehensible. Yet they sounded like Buddhist prayers (my grandmother had always been very pious, often helping out in this Buddhist temple near her place).

"We're here with you, your sons, your daughters, your in-laws, your beloved grandchildren, they are all here, waiting outside, you don't have to be afraid." My mom said to grandmother.

My sister and I said something as well, comforting words, telling her that we're here.

Grandmother's eyes were fixed upon me and my sister, there were hints of recognition towards my mother's voice and our presence. My sister patted her shoulder gently while I continued holding grandmother's hand. The muttering grew softer. Slowly she closed her eyes, and gradually she fell asleep.

"She just grew calmer after she saw both of you." One of our aunties said to us after we left the ward.

I think I felt some sort of emotional paralysis then. There weren't anger nor sorrow, my eyes were dry, because I believed grandmother would be all right. I was stone-faced and quiet, but I knew I needed to cling to the belief.

After supper, Mom and Auntie Soon Mui opted to stay overnight in the hospital for grandmother. My mom needed the company, so I stayed. My sister felt that it would be pointless for her to sleep in any of our uncle or auntie's houses in Ipoh if both my mom and I were in the hospital, so she stayed too.

It's not difficult for me anyway, considering that I often stay up overnight, and I could sleep anywhere I wanted, be it indoors or outdoors.

Even so, we weren't allowed to visit grandmother in the ICU after 11pm. The Ipoh Specialist Centre is the best hospital in Ipoh, with the best doctors from the State, but sadly, the building we were at were old and delapidated, very unlike the fine Specialist Centers I'm used to in Sunway or Subang, but more like an old general hospital. There weren't any air conditioners at the corridor, just a tiny fan that blew only towards a single direction.

We passed our hours chatting with each other, and with a stroke patient's wife. She had spent the last three nights staying outside the ICU, waiting for her husband.

I also had my sister's Nintendo DS, which I struggled with mightily to conquer Super Mario Kart, albeit with frustrating results.

There was an empty air-cond room beside us, ever resourceful and cunning, we 'borrowed' (of course, we asked the nurses very politely) two resting armchairs from the closet and brought it into the empty air-cond room so we could all take turns and sleep in there. My sister and I were the first ones to sleep, then mom woke me up an hour later so she could sleep in there. Auntie Soon Mui continued talking to the stroke patient's wife at the seats in the corridor. I sat at one of the chairs next to them and continued sleeping.

Without looking at the watch, one would find it hard to judge the time of the day at the corridor outside the ICU. There weren't any windows, the white flourescent lights continued glowing throughout the whole day, but 10am in the morning arrived unannounced. Drowsily I woke up and left the seats because the relatives of other patients in the ICU needed to sit, I stumbled into the cafetaria and had really horrible nasi lemak for breakfast.

The phone rang as I made my way back to the ICU, it was my sister, telling me that grandmother was awake.

I entered the room again. Mom and Auntie Soon Mui were standing beside grandmother. This time, some colour had returned to her face, she looked at me when I was near her.

"Mother, you don't have to say anything, we understand what you want." My mom said cheerfully. "So you better rest your energies, okay? You'll be getting lots of visitors today, see? Edmund is here. We've spent the whole night at the hospital waiting for you to wake up, and you look so much better today!"

Grandmother smiled brightly without saying a single word, she understood what my mom said.

She smiled even more when I greeted her and told her that she was looking fine, and that all of us would wait for her to recover so she could come to Kuala Lumpur.

And then, grandmother's visitors came. My uncles and aunties, my cousins, then the abbott of the temple my grandmother had always volunteered at, after that, we had other relatives, and many other friends of my grandmother's. We also had the neighbours, or fellow temple-goers who knew my grandmother.

In the afternoon, the corridor was crowded with people who wanted to see grandmother.

My grandmother is very popular.

At 2pm today, mom, my sister, cousin Fung Ming and I had to leave Ipoh.

We couldn't say goodbye to grandmother because we didn't want to cause unnecessary panic for her, so we just entered the room and spoke to her again.

Again, mom's words to grandmother were comforting, and grandmother just smiled and nodded occasionally. Mom told grandmother that she was in the hospital because she accidentally fell.

I stood beside grandmother again.

"Get well soon, okay, grandma? I'm going to make some new films for you to watch soon once you come to Kuala Lumpur." I said.

Grandmother tried to speak. Her speech was slurred and unclear. But I nodded and grinned.

Then slowly she reached out her hand and brushed her fingers on my stomach.

"I know, I'm getting fatter huh, grandma?" I chuckled.

My chuckle sounded like a croak. For that one brief moment, I found myself blinking back tears.
Email Post
Labels: Po Po