I first heard about SHORT SHORTS FILM FESTIVAL from Cara Yuan, organizer of the mobile phone film festival in China (I met her when I was at the Hong Kong International Film Festival back in March). She has came over to Tokyo to curate the Chinese program for the Short Shorts Film Fest, which will be featuring short films by Wong Kar Wai ('THERE'S ONLY ONE SUN', I've seen it on Youtube before) and Fruit Chan. I'm attending that a few hours from now, after I wake up (it's 3:42am while I'm writing this).

But wanting to familiarize myself with the way to the film fest, I decided to attend another one of the programs yesterday afternoon, right after I finish classes. Each program is 110 minutes long and is a compilation of short films for a particular competitive category. The one I went to was a screening of short films for the ASIA and JAPAN Competition, along with one entry for the STOP! Global Warming Competition. Then there's also a special screening of Tadanobu Asano's 224466, a 25-minute long short film he directed and starred in. Since I've just watched Mongol yesterday, it marks the second consecutive day I saw an Asano film. 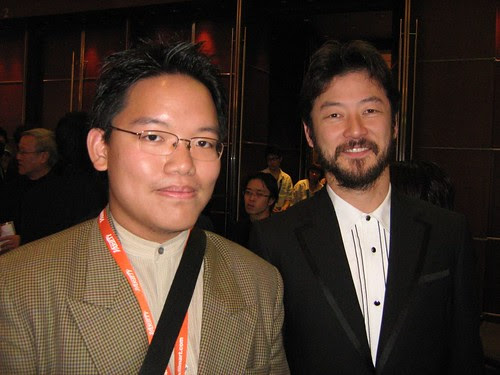 (taken back in March at the HK Film Fest)


Among the films I watched were:

GRAVITY by Yu Ichihara
A scifi/ jury drama/ social commentary done as a graduate film by the Nihon University student filmmaker. He was there, and is a year younger than I am. His film has some really good set designs and visual effects.

LATE LETTERS by Ho Lik Hang
A Hong Kong short film. The director was there too. Rather lyrical and beautifully shot. Very short, just 3 minutes.

THE MOLE by Victric Thng
A blending of live-action and 2D animation. It's stylistically similar to the works of these two Waseda students (they're a directing duo) I watched last month. Director Victric Thng is Singaporean, but the two primary actors of the film are white. It's some sort of a dark fairy tale.

REWIND by Atul Taishete
This entry from India amazes me. It's simple yet complex. A Russian roulette between three guys, but it begins from the end and ends at the beginning. Everything's played in reverse, but wonderfully edited and beautiful narrated. If memory serves me right, the Russian roulette sequence is done in one long uninterrupted take. You know how much I'm a sucker for that. The whole reverse thing just makes the actions of the characters visually unique. Like the sight of the guys rolling the barrel of the gun.

RE: by Kentaro Holy
Stylish and elliptical with its herky jerky rapid-cut editing, kinda reminds me of the road movie sections in Wong Kar Wai's MY BLUEBERRY NIGHTS. Scenery of Death Valley is awesome.

SAUNA by Junya Nishioka
Last film shown during the session. An entry for the STOP! Global Warming competition (films have to deal with that particular theme). 3D animation, 2-minute long, drives home the point perfectly. I like it. I like the film a lot, it's very quirky and enjoyable. It's almost a cyberpunk sci-fi in the vein of Shunji Iwai's SWALLOWTAIL BUTTERFLY. Asano plays an alien who is dying because he lost his drums, and the drums are part of his body. A young girl and a hunchbacked old man have to help him. They go on a crazy quest that leads them to a guitar showdown with a child prodigy. The alien Asano plays spends most of the film yelling in sheer agony. Script is by the Cannes-winning director, Aoyama Shinji. It's meant to be a segment of the digital omnibus film 'R246 Story', and a few other segments of the film are showing at Short Shorts too.

The joy of attending a film festival, to me, is the motivation and inspiration to work on a film. The appreciative part of me remembers the joys of filmmaking that I want to indulge in again. The competitive part of me makes me want to do better than something I saw onscreen (especially those that I didn't like). It's one of those "What. The. Hell. I can do better than THAT!" moments.

Well, that's all, gotta catch a few hours of sleep before I return to Harajuku for the China program.