I'm going back to Malaysia next Wednesday, but I'm only going to be back for 16 days. I haven't been updating the blog much this week because I've been doing some preparations for my return, along with some last-minute shopping as well.

I intend to shoot a short film (tentatively titled 'POSTCARD AND BALLOONS') when I come back, that's why I've been spending most of the past week sitting in cafes, writing my script. Initially, I was doing my writing at the Starbucks in either Shibuya or Shinjuku, but realized that going to either of these two places take away too much of my time, especially since it's been raining everyday, so I've shifted to the uni cafe instead. It's been great, I actually finished the first draft of my new script yesterday, and I'm hoping to get Kimmy to act again since our collaboration in CHICKEN RICE MYSTERY had been so successful. :D 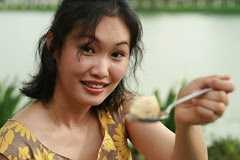 
But her role in the new one will be vastly different.

The script wasn't the easiest to write, so I had to take breaks between it, and while I did, I actually managed to churn out a 400-word short story, titled 'NON-FICTION' few days ago. Here's an excerpt:

“I am a documentary filmmaker. I practice the truest and purest form of craft. I strip away the artificial layers of contemporary society to expose the administration’s hypocrisy, all to liberate humanity from the shackles of mental slavery.” Daim the documentary filmmaker said.

A small crowd of people gathered before him. Some wept openly, realizing the veil of illusion that had clouded their eyes for years had miraculously been lifted. They have achieved Enlightenment. Their perception now free from political manipulation, they cease being another faceless, thoughtless cog of an oppressive machination.

It was all because they saw his documentary. Ninety glorious minutes that tackled issues of feminism, sexism, racism, nationalism, patriotism and other –isms.


That's less than half of it. You'll see the whole thing someday.

Frankly, the past few two weeks had been rather amazing for me when it comes to creative writing. But because I feel so drained after writing other stuff, it's a little hard for me to update the blog.

Anyway, my time in Malaysia will be rather short, yet there's a list of things I have to do when I return.