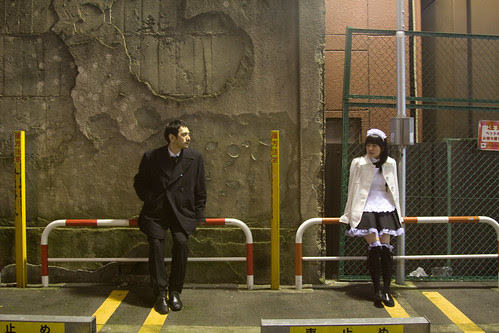 
For the third day of the week, Maiko and I were at the Toho Studios, this time with coursemate Linto, who was helping to transfer KINGYO into HDCAM for a public screening at Shinjuku Wald 9 next month (will tell you guys about it when I have more info)

I never realized that making a transfer like this is such a long and tedious affair. Initially I thought it would just be a 3-4 hour affair, at most, I ended up in the studio for nearly nine hours. And no, the transfer still isn't complete.

As we waited for Linto to do the transfer, Maiko and I headed to the Toho cafetaria for lunch. It was just at the building opposite ours, but as we were on the way, I noticed a couple of production crew members walking about. And then when we reached the cafetaria, a Toho Studios employee (they all wear a black jacket with the white words Toho Studios written on the back) was speaking to a man by the entrance.

I couldn't see his face until I was entering the building. Then I saw his face, he was pretty tanned... Louis Koo-level tan, slightly taller than I am, and had a ridiculously familiar face.


And then it occurred to me that the guy's actually Takuya Kimura. "It's Kimutaku..." I reacted only after I walked into the building because for a split second I hesitated and wondered whether he was a lookalike, but Maiko verified that he was the real deal.

I peered out the window as I waited for my ramen, wondering what was he shooting. His hair was all spiked up, and he was wearing some outlandish punk outfit. Definitely not his upcoming detective J-dorama MR BRAIN (premiering a week from now on the 23rd of May, and co-starring Haruka Ayase as his assistant), considering the appearance, and that we were in Toho Studios (to the uninitiated, it's a film studio, not a TV one). Maiko assumed that they were probably shooting a promo spot, considering that there weren't any other cast members around.

Of course, I have tweeted about this brief encounter immediately after lunch yesterday. And some friends had asked why I didn't snap a photo of him. Considering the circumstances, it would be awkward and rude.
Email Post