I was taking a walk around Bic Camera Yurakucho, checking out cameras and stuff when something in the distance caught my eye. I saw an old man sitting before one of the electronic pianos, pounding the keyboard relentlessly, and some shop assistants were looking at him.


Curious, I approached the scene and started hearing a complicated classical piano piece being played by the old man, his hands rising up and down swiftly, his fingers a flurry of motion. A young woman stood nearby, taking one photo after another. 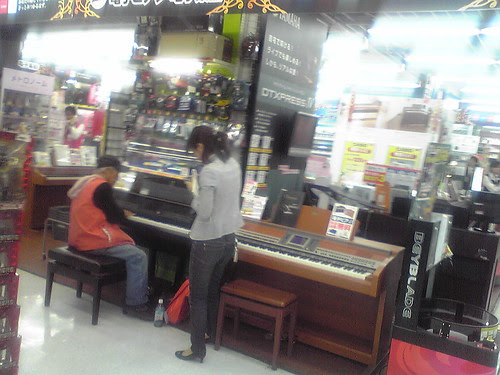 I wondered whether the old man was a famous pianist, because the young woman seemed like a reporter. She was snapping photos, asking the old man to pose, and there was also a notepad in her hand. Or could the young woman be an enthusiastic relative? A daughter? Or granddaughter? Trying to cajole the old man into action?

Suddenly the 1996 film SHINE crossed my mind. The one which Geoffrey Rush won an Oscar for playing real-life pianist David Helfgott, who suffered a mental breakdown during a piano performance and spent years in institutions, slightly crazy, until during his latter years he got his crap together with the help of his love and had a comeback concert.

A scene from SHINE


Then I thought it wasn't cool to think that the old man's a reclusive crazy piano genius, and because everyone except the young woman were keeping a respectful distance away from the two, I didn't dare to venture too close as well. The photo taken above was done secretly, as the old man continued playing the piano, I merely sneaked a peek, and pretended to be examining the Optimus Prime toys nearby. But he was playing for only a few more moments before leaving with the woman.
Email Post