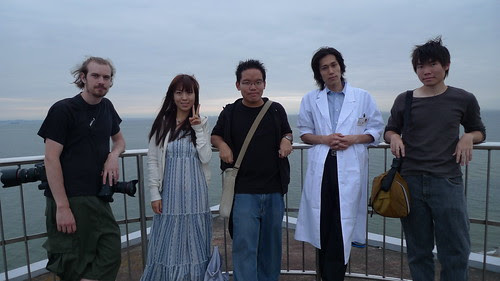 The cast and crew of THE WHITE FLOWER on top of the Futtsu Viewpoint structure. From left to right: Niklas the cinematographer, Zhu Dan the actress, me, Toro Inamura the actor, Kong the assistant director/ reluctant actor


31st of July. Principal photography for my short film, THE WHITE FLOWER (mentioned in my previous post) began.

This is a somewhat small production, with three primary cast members (actress Zhu Dan, actor Toro Inamura, and my Thai friend, Kong, who got dragged into this production because I had no time to find other actors) and two crew members (that's me and Niklas who serves as cinematographer, Kong also helps out as well). As Maiko the Producer was busy with her NHK work, I had another friend Liu Jing, to handle share some invaluable producing duties with me.

We headed off to Chiba in a car rented by Niklas at 10am. I wanted to find a beach to shoot all the scenes for the day, I picked the west coast of Chiba because I wanted to see the sunset. It was a gamble, because neither of us had any idea what we could find over there (besides, 4 out of 5 people in the car were foreigners, while the sole Japanese, actor Toro, hasn't been there either)

After enduring some insanely horrible traffic, we reached our destination (a spot Niklas picked randomly on the map) nearly four hours later. We were at the Futtsu Park, a place that sticks out towards Tokyo Bay and is surrounded by the ocean.

Although half-dead by the extended car journey, (and also because I only had two hours of sleep the day before) I was rejuvenated by the beautiful scenery of the seashore.

I have never dreamed of becoming a doctor, but I do have this secret dream of wearing a doctor lab coat. So as the actors went off to prepare themselves, I couldn't resist but wear the coat that I've prepared for this shoot. 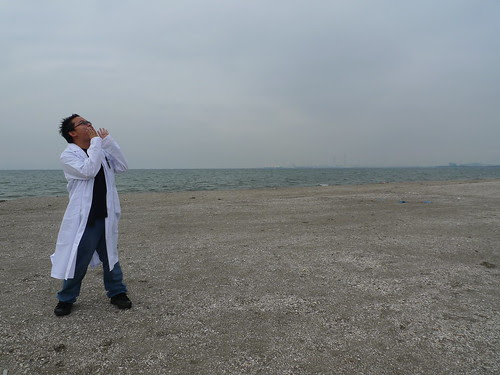 
Toro the actor looked better in the coat, so I didn't find any motivation to wear the coat again. I signalled the beginning of the shoot, Niklas started snapping photos. Kong, who came along to help out even though he didn't have any scenes today, also snapped some photos. 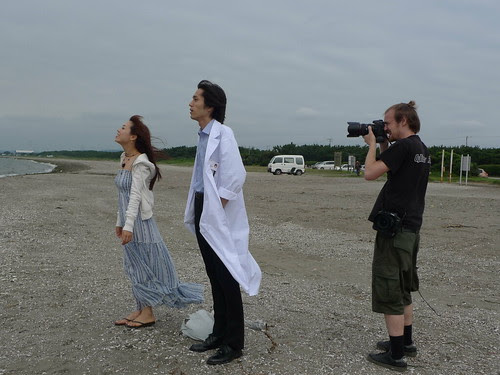 (By the way, this short film of mine is a stop-motion film of sorts, so it is shot using still cameras instead of video cameras.)

This was a new challenge for me as a filmmaker, because instead of planning the mise-en-scene as I normally did, or directing the words and movements of the actors, I had to plan the poses, gestures and expressions for the still photos, everything's improvisational, sporadic, chaotic and without order. I merely asked my actors to chit chat and do whatever they heck they wanted by the beach.

While me and Niklas would react quickly to what they would do.

It was exciting, and I also rely more on the cinematographer, Niklas, on delivering the goods since I couldn't control the visuals like I could in a conventional film. 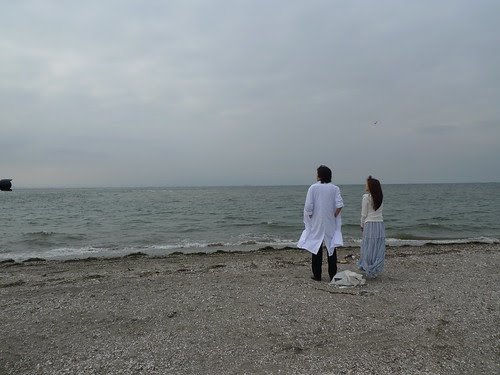 But of course, for the sake of letting both actors get into their characters, I would sometimes ask him to deliver his (mostly improvised) lines. Here's how I shot an intense conversation scene for the film.

We finished maybe around 7:30pm. The silhouette of the immensely interesting Futtsu Viewpoint structure (not sure whether that's its real name) looked like something from a science fiction film. 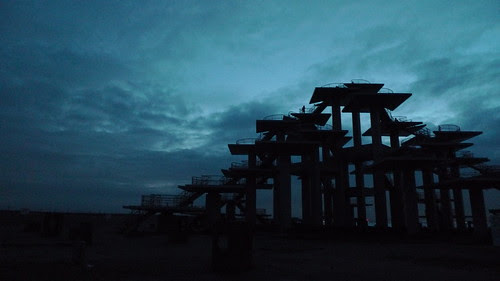 Well, the shoot went on pretty smoothly. One more day to go, hope I can wrap things up by tomorrow night (or rather, tonight, since it's 3:22am when I am writing this, will get some sleep now)
Email Post
Labels: The White Flower Videos