Fireworks at Haeundae Beach at night

Argh, here lies the problem with my blogging these days. Because I do it so erratically, I have to struggle to remember things. The past few days was a blur. Attending the Tokyo Film Fest, and also editing my film. Heck, it's been nearly 2 weeks since I've gotten back to Tokyo.

10th of October, a day after the Johnnie To Master Class, WOMAN ON FIRE LOOKS FOR WATER world premiere, and Pen-ek teaching me how to roll a tobacco, I went through a less eventful day. 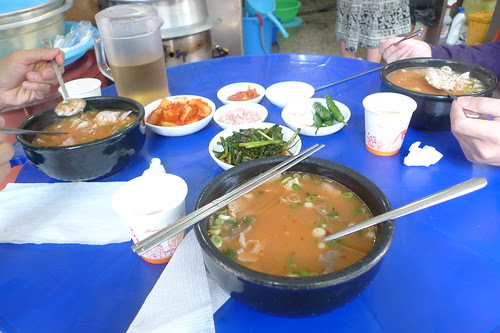 It's a sort-of porridge. Not sure what it's really called. Here's more of us eating:

(click here if you can't see the embedded video)

In the afternoon, we went to see Thai filmmaker Anocha Suwichakornpong's New Currents-competing film MUNDANE HISTORY (we call her Mai). I didn't know then that MUNDANE HISTORY would end up being the only film I saw at the Pusan Film Fest...

Due to Mai's background as an experimental filmmaker, I felt that the film truly took off when she made use of her experimental skills for the really abstract scenes. At those moments, my jaws occasionally dropped open. And the ending... well, I won't spoil it. (When we told Seng Tat in the morning that we were going to catch the film, Seng Tat, who had seen a rough cut of the film earlier, remarked "watch out for the ending... it's... eeee...")

There were a lot of parties at night. I'm not really a partying type of person, and I seldom drink, so during the wee hours after midnight, as everyone went off to dance, and I felt a little suffocated being crammed with so many people in one place, and grimaced at the pulsating music that slammed against my head, I headed off.

I saw Namewee (he came along too because he acted in some segments at the 15Malaysia omnibus film) sitting at the corner, seemingly uncomfortable with the settings too. So I went over and asked whether he wanted to go for a walk outside.

He seemed relieved. We went out and started to speak.

Then Fred, his manager and also Ming Jin's friend, came over and dragged him off to another club. "What? Another club?" was Namewee's feeble protest before he entered the cab.

Alone again, I saw fireworks in the distance and started walking along Haeundae Beach. 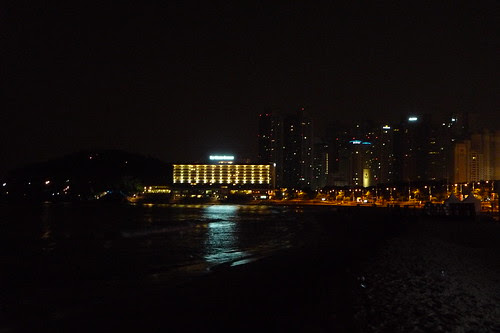 I tried to follow the direction of the fireworks. There were different groups of people playing with them.


(click here if you cannot see the embedded video)


Despite the building lights in the distance, Haeundae Beach was rather dark at night, and as I trudged through the sand, I spotted many people, mostly couples, sitting close to the gentle waves, then there were also some others gathered there for picnics and drinks. The sound of the crashing waves was, as usual, soothing, the occasional sight of fireworks was, to me, mesmerizing. And then the wind blew, and I wondered whether the sun in Pusan would rise as early as the one in Tokyo.
Email Post
Labels: Liew Seng Tat Pusan International Film Festival 2009