Due to limited internet connection at Pusan, I could only check my emails in one of those public computers at the PIFF center. But now that I'm back in Tokyo, I'll start posting photos I took from the festival.

On the 8th of October, Tokyo was hit by typhoon in the morning, classes in university were canceled, some flights were rescheduled, ditto with other public transportation too.

My flight was supposedly at 7pm. I headed out of my place at 2pm. To go to the airport. A Narita express would've reached the place in 80-90 minutes, alas all Narita Express trains were canceled that day, so I could only take a longer (but much cheaper) route there. I won't go into details, but I reached the airport at 6pm. The journey to Narita, often a pain in the ass, was an even bigger pain in the ass.

I was shocked to find out that the plane was scheduled to 6:30pm.

Only half an hour to go?

I rushed to the check-in counter, there was someone else who was going to Pusan too. The counters were all closed, I asked an attendant nearby and she made a call. A sour-faced chick (a rarity in Japan, especially at their workplace) appeared, we proceeded with the check-in.

She glanced at her watch, still sour-faced.

"So... how long's the flight gonna be?" I said, still trying to make small talk to diffuse tension.

"This time, we let you get in, but next time, try to arrive 2 hours before the flight." She said, of course, I would be lying if I say that she didn't say that with a sour face.

Then after going through all the procedures, I rushed into the plane, and slept.

I woke up more than an hour later and realized that it hadn't taken off because the morning typhoon had disrupted the schedules for many flights, it was hard for the plane to take off. Guess the sour-faced (but somewhat cute) girl's sour-faced threat was a little uncalled for. Feh.

Reached Pusan after a 2 hour delay. It was already 10 something when I was at the airport. The last flight of the day. I ran to the Pusan Film Fest booth and saw a girl packing and preparing to leave. I told her who I was, she immediately arranged a taxi to the hotel for me.

The trip was nearly an hour. But at least I got to watch some Korean soap opera in the car.

Luckily for me, the opening night party was still on. The entire 15Malaysia (omnibus film, 15 segments done by 15 different Malaysian directors) delegates were there, it's the biggest Malaysian team in history, with 30 people and all. Along WOMAN ON FIRE LOOKS FOR WATER and 15Malaysia, there were a couple of other Malaysian films screening at Pusan, like Chris Chong's KARAOKE (which went to Cannes earlier this year), Ho Yuhang's AT THE END OF DAYBREAK (won a Netpac award at Locarno), and Charlotte Lim's debut feature MY DAUGHTER, which is competing under NEW CURRENTS.

Here's a photo of me with Charlotte, and the lead actress Tian See (she was in Tan Chui Mui's short film EVERYDAY EVERYDAY, Yuhang's RAIN DOGS and SANCTUARY and James Lee's CALL IF YOU NEED ME), and a Korean actress whose name I cannot remember. Sorry. 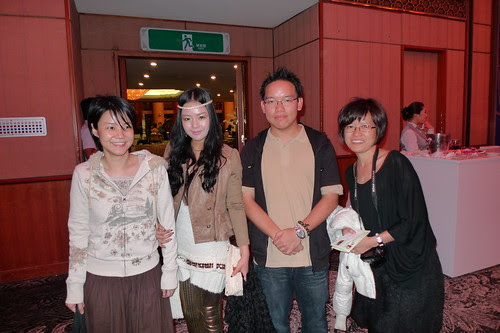 From left to right: Tian See, unidentified Korean actress, me, and Charlotte


Here's Ming Jin with the girl. 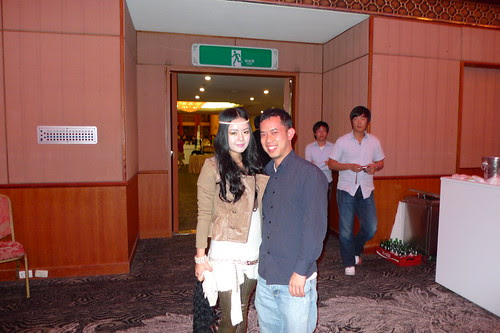 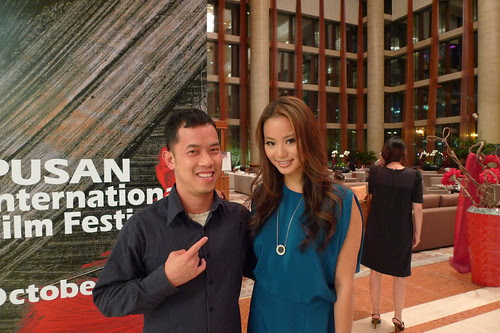 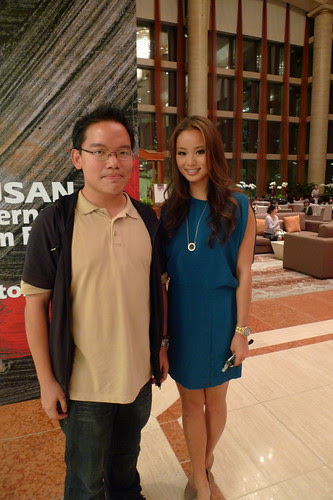 I looked like Shrek standing next to her. :( (I made a mental note to be more careful when I take photos with slender statuesque ladies next time)

Next post will be about me attending the Master Class of my long-time hero Johnnie To, and also the screening of WOMAN ON FIRE LOOKS FOR WATER.
Email Post
Labels: Liew Seng Tat Pusan International Film Festival 2009 Tan Chui Mui