I don't think my handwriting is THAT ugly

I developed an outline for my new film two nights ago.

Yesterday evening, I tried to come up with a rough film treatment. (it's typically the step before the first draft of a screenplay)

Maiko and Kong, along with An-chan, were having discussions about Kong's new short film, which was scheduled for shooting this month.

Me, knowing that it was a rare moment where I could concentrate without having any other distractions, took some papers and started scribbling some notes. 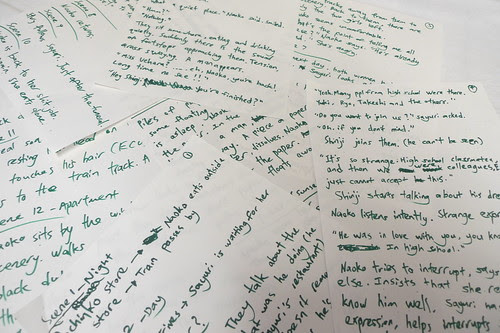 A total of 7 pages to help me visualize my upcoming film better.

I then brought these notes home. Took a brief nap. Woke up at midnight, and started typing out what I've scribbled. 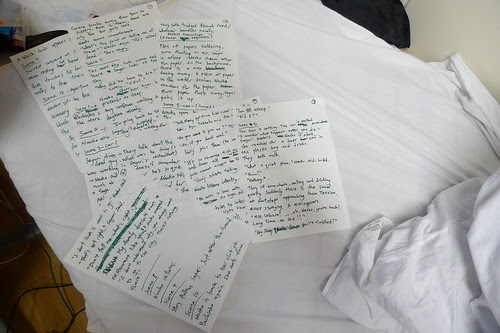 I haven't been able to sleep since then.

I'm also very narcissistic, so I wanted to appreciate my own artsy handwriting on these notes. Before i make a decision on whether I want to throw them or not. My handwriting, unfortunately, had always been deemed 'ugly' by the teachers from primary to high school. But then, isn't the fact that I still write like I did when I was 5 a thing of beauty itself? No one understands me.
Email Post
Labels: Exhalation