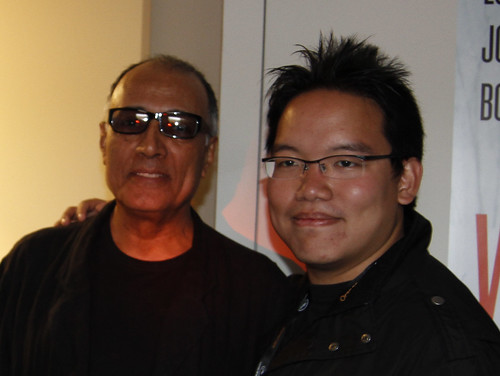 This is a press kit of Abbas Kiarostami's CERTIFIED COPY, starring Juliette Binoche. I picked it up from the same party.

As for me, I went to see Kiarostami's CERTIFIED COPY.

It was ten in the morning, but crowded.

I went with Fooi Mun.

Fooi Mun, being an actress, was able to score a maximum of two tickets for morning shows at the orchestre area (which means that I got to sit at pretty good seats). In contrast, the rest of us (including Ming Jin) can only get at most a balcony seat.

The perks of being an actress!

(Should have registered myself as an 'actor' of THE TIGER FACTORY because of my split-second cameo in the film.)

At the risk of sounding like a philistine, I confess that I've never actually seen a feature-length film from Abbas Kiarostami. Only his contributions to omnibuses like TICKETS (2005) or CHACUN SON CINEMA (2007). During my days in Perth, I remember borrowing a DVD of TASTE OF CHERRY (1997) from the university library, but I can't remember why I never got to watch it. Hmm.

I enjoyed CERTIFIED COPY a lot, many people I talked to have divided opinions about the first half of the film, and the second half. I myself preferred the second half, but mostly due to my own interpretation of my film... (skip the following paragraph if you don't want me to ruin your viewing experience with a spoiler)

The two protagonists of the film seemed like strangers at first, going out for a walk and a chat, then the (possible?) "twist" is that they are actually a married couple celebrating their 15th wedding anniversary.

It's open-ended, so some interpreted them as strangers PRETENDING to be a married couple, but for me, it's really without any doubt that they were indeed married and the film was really a bittersweet examination on their fading relationship.

Juliette Binoche was the poster girl of this year's Cannes Film Festival, it's almost odd to see her winning the Best Actress for this film too, although her performance is indeed great.

In the evening, Ming Jin and Tomoko were preparing to go for the gala screening of the same film. Prof Ando and Kobayashi-sensei have managed to settle the problems with her missing passport and will head to Paris the next day as planned.

Prof Ando lent Ming Jin his bowtie because you have to wear one to go for the gala screening.

We had some (unexpectedly) decent Chinese food.

Ming Jin and Tomoko had already left for the screening. Prof. Ando and Kobayashi-sensei didn't go in the end, choosing to wait for the rest of the team members to arrive at the hotel.

Fooi Mun and Kobayashi-sensei looked at some nice shoes... or a bag, I had no idea where was she pointing at.

Some clips from CERTIFIED COPY.

Trailer. And some quotes from Kiarostami that I find intriguing. For some unexplainable reason, I can relate to some of them.

"In this type of cinema, whether working with actors or non-actors, as much as you do direct them, if you allow yourself to be directed by them, then the end result will be much more pleasing. The real and individual strengths of the actors is allowed to be expressed and is something that does affect the audience very deeply."

"I don't have very complete scripts for my films. I have a general outline and a character in my mind, and I make no notes until I find the character who's in my mind in reality. When I find the character, I try to spend time with them and get to know them very well. Therefore my notes are not from the character that I had in my mind before, but are instead based on the people I've met in real life. It's a long process, it may take six months. I only make notes, I don't write dialogs in full. And the notes are very much based on my knowledge of that person. Therefore when we start shooting I don't have rehearsals with them at all. So, rather than pulling them towards myself, I travel closer to them; it's very much closer to the real person than anything I try to create. So I give them something but I also take from them."

"Good cinema is what we can believe and bad cinema is what we can't believe. What you see and believe in is very much what I'm interested in. And it's not so much a question of whether we've shot it through 35mm or digital video; what is important is whether the audience accepts it as real. It's very true that non-actors feel more comfortable in front of a digital camera, without the lights and the large crowd around them, and we arrive at much more intimate moments with them." "If we're not going to take full advantage of digital, then 35mm is a better medium. Especially for shooting dramas - I have no problem with 35mm. It seems that film-makers are being divided between those working in digital and those who are not. I think it's not something predetermined - it all depends on what project we have in mind, and on that basis we choose the medium."

"Children are very strong and independent characters and can come up with more interesting things than Marlon Brando, and it's sometimes very difficult to direct or order them to do something. When I met Akira Kurosawa in Japan, one question he asked me was, 'How did you actually make the children act the way they do? I do have children in my films but I find that I reduce and reduce their presence until I have to get rid of them because there's no way that I can direct them.' My own thought is that one is very grand, like an emperor on a horse, and it's very hard for a child to relate to that. In order to be able to cooperate with a child, you have to come down to below their level in order to communicate with them. Actors are also like children."

"The Iranian government as a whole has no relationship with my films. They're not particularly interested, perhaps this kind of cinema is not very interesting to them. And I'm not sure that my films show the reality of life in Iran; we show different aspects of life. Iran is a very extensive and expansive place, and sometimes, even for us who live there, some of the realities are very hard to comprehend. But on the whole, the government grapples with more important issues and we can maybe say that these films don't really exist for them. It's not about whether they like it or don't; it's just not very important to them."