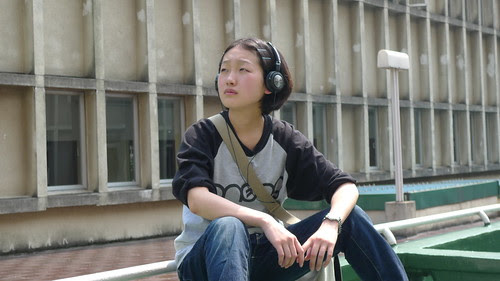 3PM is an exercise from the cinematography class I was taking last year. I remember finishing it around the end of June. Then summer came, and I was mired into some sort of depression, which is what I am pretty much going through now. (Quite odd, it's as if I'm stuck in a time loop like the protagonist of the film.)

Anyway, all my rushes (raw footages) of this film had been destroyed when my hard disk died last year (just a few weeks after the film was done), making this a 'lost work' of mine. And I wouldn't exactly classify this as part of my oeuvre since it's really just a class project of sorts.

The film only existed in the form of some DVDs that I managed to burn for myself. There are some works that I've done which I would rather it doesn't see the light of the day, but I had a lot of fun shooting 3PM, with the help of a nice cast and crew. And I wouldn't want the film to disappear just like that, so I might as well upload it online for fun.


The main actress of this film is Yumiko Kitazawa, the remaining co-stars were non-actors (course mates Yoh Kabayama and An-chan).

I would say that this project is a nice precursor for subsequent collaborations, as I would work with some of the crew members again after we made 3PM. Some staging techniques that I experimented with here would also be used in my later films.

Erika Matsushita was the cinematographer. Yuiko Kato was the producer/ asst director (this was our first collaboration, she would later help me as assistant producer for THE TIGER FACTORY when we were prepping for Cannes in April) Koda Shomin was the sound guy (he would later serve as the assistant director for my new short film, EXHALATION).

3PM is basically a GROUNDHOG DAY homage, about a tomboyish girl Mika who likes hanging out at the university rooftop everyday at 3pm to catch a glimpse of a boy she likes. Then, she ends up in a time loop.

The two songs I used in the film are 'ARNE' by Haruka Nakamura and 'RALGO' by Janis Crunch, both tracks can be found in Haruka Nakamura's album, GRACE. (no idea why it's rated as explicit in Amazon.com, weird)

So, here's the film.