Watch this documentary BOOTH BABE CONFESSIONS, it'll make you realize how much peril they've put themselves in, and how repulsive some people had acted towards them. Shame! 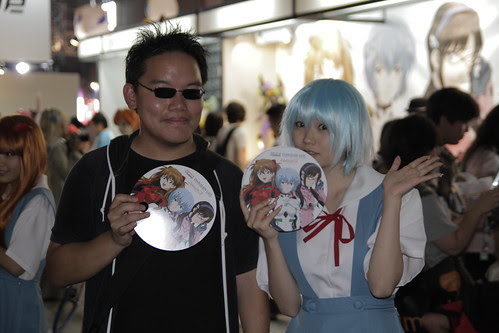 So if you're expecting this blog post to be purely about pretty girls at the show, prepare to be disappointed, because, as you can see, I also have TWO photos of male cosplayers. And the awesome Snake from Metal Gear Solid who used the banana as his gun. He's a very smooth one-eyed Snake. 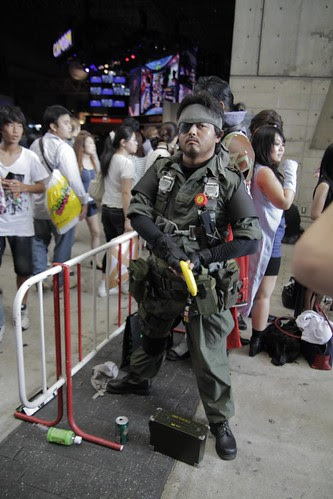 I'm glad that I have clarified matters with the sole two pictures of men I have, so I'll move on with my narrative.

Yesterday morning I headed off to the Tokyo Game Show 2010. The last time I went was 2008, I missed it last year either because I was at the Venice Film Fest, or Pusan Film Fest, can't remember. 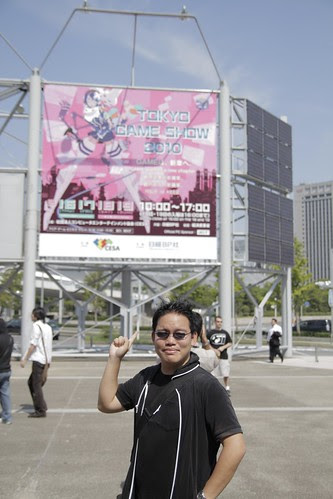 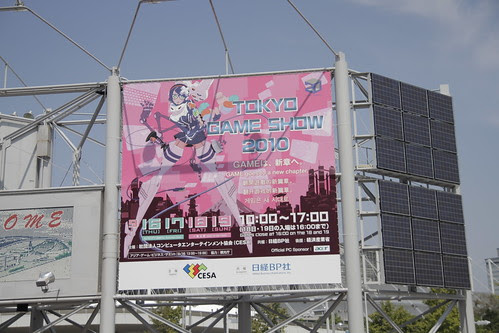 I arrived at 11am. The queue was long. 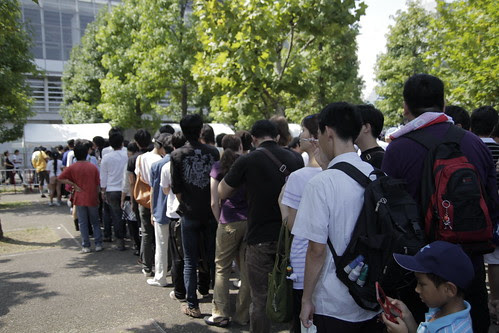 
Took a glance at the Square Enix booth. 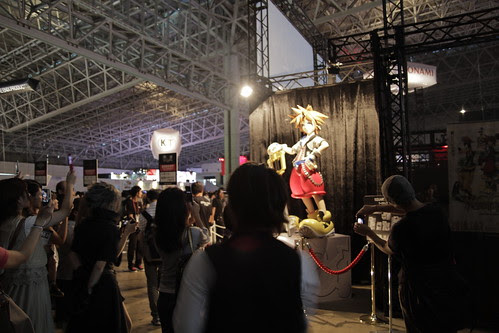 Walked from one hall to another and ended up at the cosplayer section. 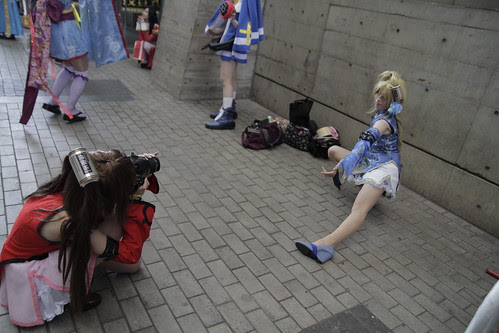 
I hurried along, because I wasn't going to stop and take photos of those cute cosplayers. 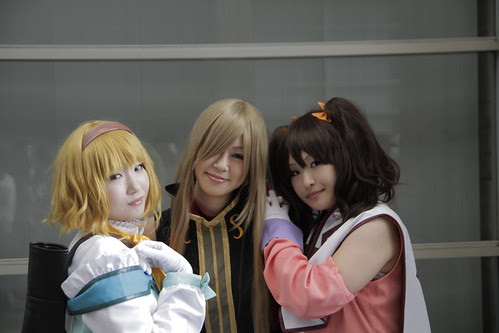 My mission was simple. I only wanted to sample the upcoming games, and study intensively the strategies employed by game companies when promoting said upcoming games.


If you look closely at the video, you notice that the booth girl is rather cute, and she was handing out Marvel Vs Capcom 3 folders to the people trying the games. 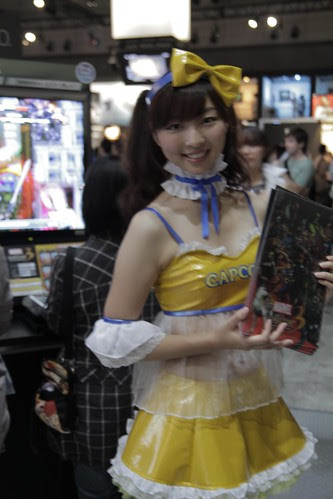 As a respectable filmmaker, my focus was on the game being played behind her. Not on her.

So I tried the Xbox 360 version of Marvel Vs Capcom 3, trying the characters of Deadpool, Ryu and Thor. Nice game.

It was very crowded.


I was shocked by the attention that the girls were getting, at the same time, i was moved by these girls' diligent efforts to promote their company.


I then stumbled into the IGNITION booth. I looked carefully at the booth girls' shirts to know what they were promoting. 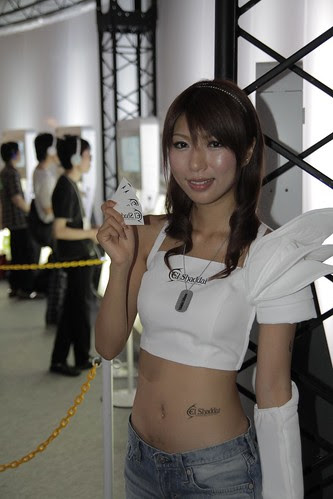 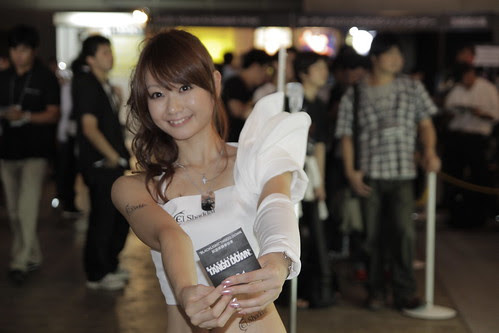 It was El-Shaddai: Rise of The Metatron. There were numerous females playing the game. "Gamer girls?" I pondered, always thinking they were a myth.

Then I saw another crowd gathering around two booth girls. 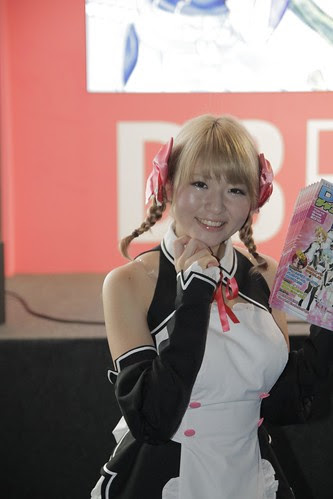 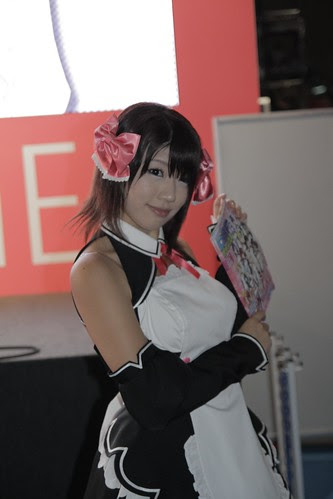 
As you can see from the subtle panning of my camera during the video above, I made an effort to show that they were promoting for the company D3Publisher.

Meanwhile, online games were being plugged as well. 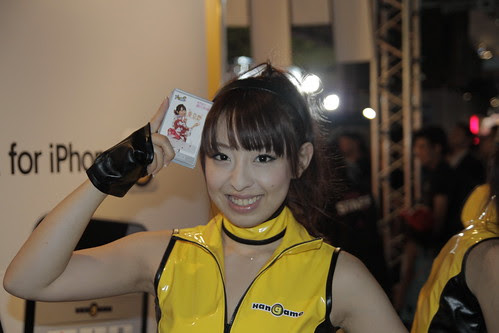 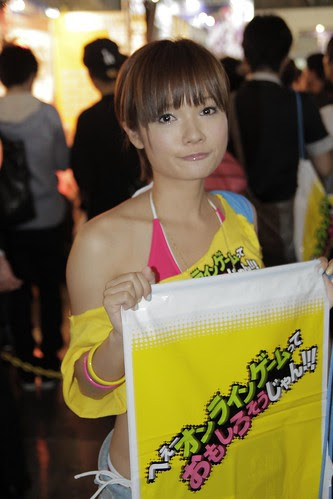 Some universities have also set up booths in the Tokyo Game Show, unfortunately, I couldn't exactly remember what university the girl below was from. 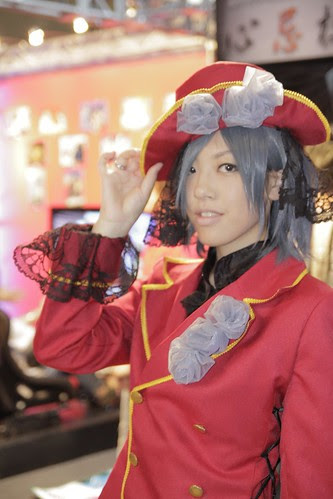 But I remember Nihon Kogakuin University. I marveled at the uniforms worn by the booth girls, wondering quietly whether it was an actual uniform won by the university students.

I think the Nihon Kogakuin girl was happy to see me too. 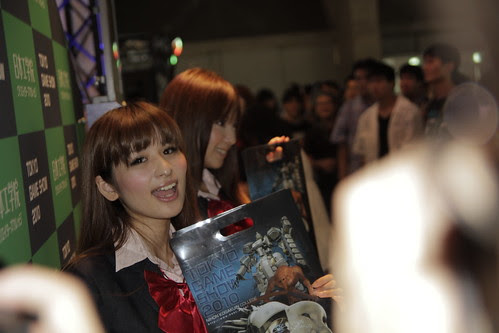 As I continued walking, I saw a girl dressed up as Rei Ayanami, handing out Evangelion stuff. 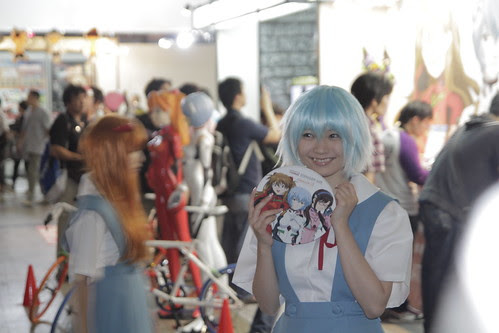 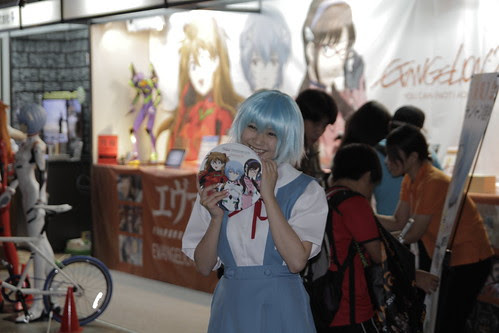 She was decidedly a female-friendly booth girl, as even a number of girls were gathered around her, taking photos, screaming "Kawaii!" to themselves.

I respected her drawing power, so I decided to show people that even a cynic like I, had decided to take the stuff that she was handing out. Hence this photo.

There was a corner for people to sit on the floor to rest and eat. I was reminded of refugee camps I see in disaster films.

I saw the Famitsu Magazine's booth. It's the most important video game magazine in Japan.

Guess they were having some sort of a variety show or something.

I walked past another booth, and marveled at its ingenuity of letting their booth girl work under such comfortable circumstances. 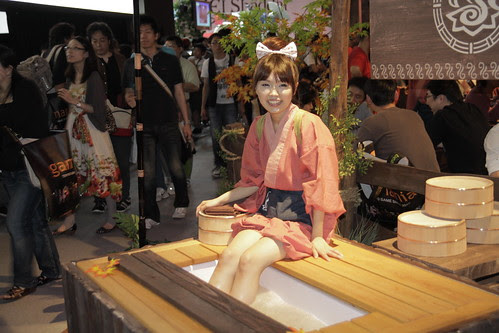 
Unfortunately, I didn't really find out what booth it was. Alas.

I returned to the Marvel Vs Capcom 3 booth. Not because i wanted to take photo with the girl. 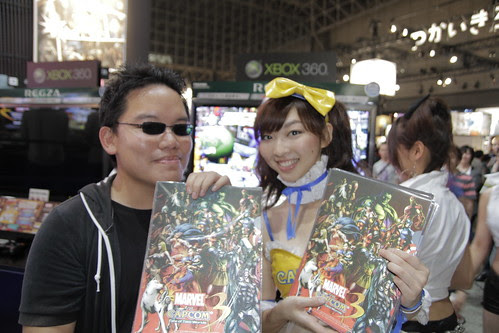 But because this time I wanted to try the PS3 version of the game. It was pretty good too.

From the distance, I watched the booth girls trying out the Kinect.

Then there were women with guns at the YAKUZA: OF THE END booth. 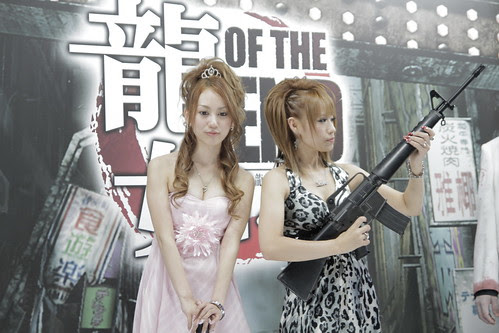 The game has zombies in it.

Notice the zombie behind the women with guns.


I nodded. Despite having not played a single Yakuza game, I found myself instantly intrigued by the premise of this new game, not because I saw eye candies with guns, and some zombie, I was awed by the colossal marketing machinery of the Japanese gaming industry.

Shortly after I posted this, the blog Go Make Me A Sandwich linked to me in an Oct 2010 post with the following quote:

(This guy repeatedly mentions how he’s “against booth babes”, but all his babe photos are posed… Not sure what to think.)


It's good to be ah, morally ambiguous. Anyway, it's quite a coincidence because I noticed a sudden spike of traffic from Go Make Me A Sandwich (I highly recommend a read, it's mostly about How Not To Sell Games To Women) in the past few days, and I was also just talking to a friend about attending next month's Tokyo Game Show 2011.

I'm sure once again, my highly conflicted feelings towards Booth Babes will resurface. (hoho.)
Email Post