- June 28, 2011
I returned to Tokyo 3 nights ago and resumed my usual quiet, solitary lifestyle, kinda like Colonel Aureliano Buendía during the twilight of his years.

The original intention was to cut myself away from the world for the next few weeks as I dive into writing. When it comes to writing screenplays, I usually go through intensive researches.

These are the periods of time when I would be drowning myself into all sorts of films, music or novels that I think could help me with my inspiration. (Since I got back 3 nights ago, I finished the Margaret Atwood anthology 'WILDERNESS TIPS' that I bought 5-6 years ago in Perth, then I went through the discography of Shiina Ringo, who recently converted me into a fan, I watched Sono Sion's STRANGE CIRCUS, and Mika Ninagawa's SAKURAN because Shiina Ringo served as Music Director and I loved the OST album. I also watched the first episode of the anime HOUSE OF FIVE LEAVES.)

Then I would go through Wikipedia, reading up things that I needed to read about, then I would go through other links related to the same subject, and then more, through a labyrinth of information, until I end up wondering what I was researching for in the first place. Today I read about the Malayan Emergency that lasted from 1948 to 1960, then I read about the Indonesian-Malaysian confrontation from 1963 to 1966, followed by 1987's Operation Lalang, I then tried looking through ancient folklores of my own country and revisited the Si Tenggang folk tale (it's about a poor sailor who sneaks off into a trading ship, becomes rich, marries a princess, owns his own galleon, goes back to his hometown but is too ashamed of humble origins and refuses to recognize his own mother. Old mama was pissed, curses him, when he sets sail, he turns into stone)

I think my history teachers from secondary school would've been proud of me.

Anyway, as I read about Si Tenggang, I stumble upon a 2003 interview with Malaysia's leading poet Muhammad Haji Salleh. 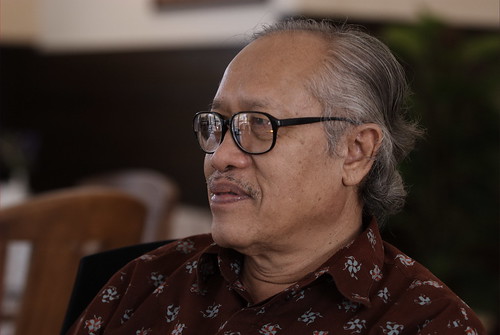 The poet had a poem told through Si Tenggang's point of view that was meant as a metaphor of one moving away from his own cultural roots. This poem is a compulsory read in English classes for all secondary school students in Malaysia. (the poem is included in the link to the review)

What struck me was the following line by Muhammad Haji Salleh.

I have lived in many countries - Malaysia, Singapore, Indonesia, Japan, the U.S., England, Holland and Germany. These countries, their literary cultures, languages have seeped into my natural desire to get the best out of them. At the same time, being for a long time a foreigner, I had to always define myself – not only in ethnic terms, but as a citizen of a bigger world. One does not appreciate one’s uniqueness when one lives in the home country. But, when one lives somewhere else, especially in the former colonial countries, one searches hard for one’s uniqueness, difference, and possible contribution to the world. These are the more colourful aspects of the culture that one wears on one clothes, words and ways. They are one’s best sides to show off – or at least as a statement of identity.


I have always been traveling a lot since I was a child. I remember how annoyed I would get in a foreign country when someone told me they don't know where Malaysia was. In fact, it was quite a common occurrence then, during the early 90s, during my visits at the United States and Europe. (dad liked bringing the family along during his business trips) It was being in a different country that I would find myself speaking up for this little-known place called Malaysia.

In fact, until this very day, I get very irritable when Chinese people react in surprise by the fact that I could speak Mandarin.

There were conversations like this during my trip in Shanghai:

Me: Here's my business card. I'm from Malaysia.
Someone: Wow! But you have a Chinese name?
Me: (obvious scowl) Yes, because there are Chinese people in Malaysia too.

Me: Hi, I'm Edmund Yeo, a director from Malaysia.
Someone: Wow, you can speak Mandarin too?
Me: Yes, although we all live in treehouses, some of us are linguistic experts. Very cunning linguists.

Someone: OMG! You speak Mandarin!
Me: Yes, you ARE aware that there ARE Chinese people outside China, right?

Yes, I overreact, and was mostly being neurotic. I wonder whether there was a cure for neuroses.

When asked why is it so important to define oneself and find one's own roots. Whether it had anything to do with Malaysia's colonial experience or the post-colonial situation, Muhammad Haji Salleh answered:

"I think you have put your finger on two of the most important points. Firstly, as a colonised people, we were a conquered people, our land and ways were looked down as inferior. Our language was replaced. Our traditional works were not taught in school, and our civilisation put on ice.
It is also quite ironic that I was awaken to feelings of anti-colonialism in England, in the US, and also the Netherlands. In these countries, you find a greater freedom to think and act compared to what was granted to us when we were under them. Here people were almost equal, at least, or more equal. Here too voices against colonialism and repression were allowed and heard.
While in Malaysia I was taught that the greatest literature was English, but in England itself, through English I discovered other literatures as great – those of the Chinese, Indians, Japanese, and without prejudice, literature in the Malay-Indonesian languages. But, at the same time I was enthralled by the experiments of the Latin Americans, writers such as Borges, Neruda, Paz and Valenzuela. In England and western countries, I was dismantling the colonial superstructure built through colonial education in my mind and emotions. It was then I felt free and all the richer because I have crossed borders and found great literatures from less known countries. Ironically, I could do this because I knew English and could read the English translations."


I have to say that the same thing happened to me when I was in Australia. Vague feelings of anti-colonialism, and a newfound curiousness to discover other literature. I picked up a minor in English Literature (to combat the dryness of studying commerce for my Major), and found myself stumbling upon the works of Calvino, Eco, Thomas Mann, Kawabata, Murakami, Marquez etc. Literature from all over the world. Prior to that my only interest were in the sci-fi/ fantasy genre!

I felt disturbed too, when fellow Malaysian course mates were still gripped by feelings of colonialism when studying abroad. This twisted form of inferiority complex that made them believe in some sort of racial superiority.

Someone: Wow, look at them, these gwailos have such high production values in their works! We cannot compare at all! We cannot do what they're doing.

Me: Big deal. They cannot do what WE are doing too. (meanwhile, I thought: jeez, you're sure doing a great job boosting my morale)

My retort fell on deaf ears.

When I was on the plane back to Tokyo, I sat next to an Indian man who is working as a lecturer. He started chatting with me. We talked about films.

"Seen Bollywood films?" I laughed. "Yup, a few. And yes, I knew you were going to ask me that. This is why I respect you guys. You guys are nationalistic, most Indian guys I meet, they always ask me whether I've seen any Bollywood films. I can definitely say that it is almost impossible for a Malaysian dude to ask whether you've seen our films, our literature, listened to our music etc."

Sadly, even I myself couldn't escape this. I did tell him a little about Malaysian Independent Cinema, but instead of enlightening him with the poems of Muhammad Haji Salleh, all I could do was to express my own enthusiasm towards the works of Rabindranath Tagore, and also the majesty of the Indian epic Mahabharata. I wondered whether I was another Si Tenggang as well.

Having been gone most of this month, and now that I have returned to Tokyo, I haven't really been able to keep up with news back home.

So I was oblivious to Unggun Bersih, the new poem by another national laureate A Samad Said until commentator Dreamer Idiot mentioned it:

Abused by embers, we're all getting ill -
to call out to the message of independence,
We manage still democracy,
as brilliant as the sun yearning for the desire of sincere self-regard.

Two centuries ago, Samuel Adams exclaimed
(in Boston where tea was poured into the blue sea):
We don't need a loud fluffy cheerleading
What we need is just an eminent bonfire.

You can listen to Samad's June 9th poem recital here.

Oh, by the way, two days ago, he was hauled off by the cops for questioning because the poem was 'seditious'.