Came back from Dubai last night, slept through most of the entire flight. It's a fun feeling.

I'm now going to continue from my previous post, Films I saw at Dubai International Film Festival 2011 (Part 1), by listing out the rest of the films I caught in the Dubai Film Fest, along with some anecdotes if I have any.

Immediately after the LAST FRAGMENTS OF WINTER screening (along with the other short films), I chose to go for the late-night screening of P-047, which was screened in Venice Film Fest a few months ago. I was hearing many good things about it, even Ono-san, executive producer of my short film EXHALATION, was telling me back in October that the film's the best Thai film he had seen this year.

Therefore, I walked into the screening, half-excited, but also half-worried that it would be a film of such obliqueness and meditative pacing like most Thai films that I caught in film festivals that I would end up falling asleep.

"I won't! I have this!" I said, raising a cup of double espresso.

In the end, I don't think I really needed the double espresso. The film was a mind-bender which necessitated audiences' own attempts to construct the narratives within their own minds. (It's a little like, ah, my own LAST FRAGMENTS OF WINTER, really. Haha.)

It's very novelistic, like (lazy comparison, I'm sorry) a Haruki Murakami novel, or David Mitchell's NUMBER9DREAMS, stories within stories, fractured timeline, eccentric characters who come in and out, disappearing without any explanation, and this deceptive everyday setting with a rather surrealistic undertone. At times I marvelled at its intricate structure and its poetry, I couldn't help but smile a few times during the film, at some of the artistic risks that Kongdej took with this film.

By the time it ended, a few audience members (from China) remarked (in Mandarin) "I don't even know what the hell was going on, I really couldn't go through it". Yes, it can be divisive, and not really a film for Joe or Jane Popcorn (not that I'm disparaging them or anything...), but for me, it's a pretty fine film. :) Would love to see more people catching the film, and generate some discussions about its mystery.

Here's a 40-minute video of Kongdej, Soros and main actor Apichai Tragoolpadetgrai at the press conference of the Venice Film Festival. Where they got into quite a lot of details about their film.

Actually, I watched this in the video room a few days earlier. This is a sad little Vietnamese film of a young 12 year old girl whose mom got into a destructive love affair with a driver, and ends up throwing everything away. The girl ends up playing a maternal role towards the orphan next door. Having worked with children before in my own films, I can say that directing them isn't the easiest thing in the world. Therefore, when I see the child actress Phung Hoa Hoai Linh delivering such a heartbreaking and nuanced performance, I quietly wondered whether she would have a chance of picking up a special award in the festival. (she would end up winning the Best Actress award in the film festival. During the award ceremony, director Nhue Giang said that the child, who has had some financial difficulties at home, will finally be able to pay for her tuition fees in school. It's great to know that this award will help secure her future).

I remember that the Best Actress award winner in Dubai Film Festival 2008 also went to a Vietnamese actress (Hong Anh of MOON AT THE BOTTOM OF THE WELL). Based on the handful of Vietnamese films I've seen, almost all of them had a very powerful female performance (while the female characters are usually well-characterized and hold the entire film together). Ninh Duong Lan Ngoc of last year's FLOATING LIVES also left quite an impression for me. It's something I might look into more next time, and to learn from.

14) UNDER SNOW by Ulrika Ottinger

UNDER SNOW (Unter Schnee) is a documentary of sorts (or a fusion film) set in the Japanese region of Echigo, lots of snow, and exotic customs and rituals are depicted in a way that can only be done when a foreigner is doing a documentary depiction of somewhere in Japan. Very fine photography (not surprising, considering Ottinger's personal background in painting and photography).

15) ONCE UPON A TIME IN ANATOLIA by Nuri Bilge Ceylan

I was first exposed to the works of Nuri Bilge Ceylan at Dubai International Film Fest 2008, when I saw THREE MONKEYS. The director didn't come then, except the young actor. The film was so visually stunning that I would constantly revisit it via staring at the trailers on Youtube. It's one of those films then that left such an impression that I told myself that I had to make sure I would take care of the visuals in my own films. That happened a few weeks before I made KINGYO.

On the morning of 12th December, already psyched that I could finally catch ONCE UPON A TIME IN ANATOLIA (I had also constantly been marvelling at its trailer), I came across an interview with him on THE PLAYLIST from a week earlier at the Marrakesh Film Fest.

An excerpt from the interview that I liked.

From near the beginning of his film career, Ceylan has often had political issues running through his films. These range from small asides such as a landowner in "Clouds of May" burnt out by constant fights with the government to making up an entire premise in "Three Monkeys." Despite issues with his country's officials, the director stresses that these do not necessarily reflect his opinions, and that he personally has no disillusion with the country. "There's nothing political about it. People like to read the films as political, especially in Turkey. But I try to fight that assessment as much as possible. Of course I have my political opinions, but they are not the most important thing to me and I generally hide them. I'm more interested in the inner-world of the characters, and if you talk too much about politics than that's all people will want to talk about," he says.


I have my own political viewpoint too, but I really don't have any interest in marring my film with politics in the foreground and totally overlooking the other narrative elements of my work either. So nope, I'm not the guy to go to when it comes to making activist films.

Assuming that NBC's at Marrakesh, I was really surprised to know that he was actually at the screening of ONCE UPON A TIME IN ANATOLIA! In the end, he was mobbed by so many that I couldn't take any proper photos of him, or with him. 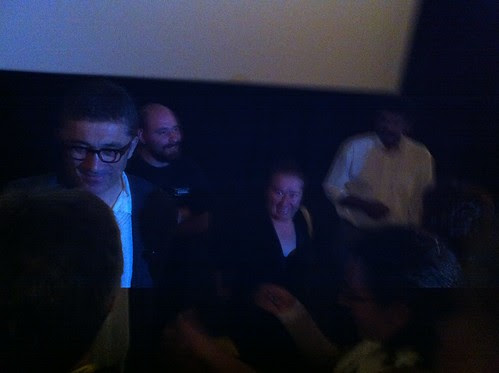 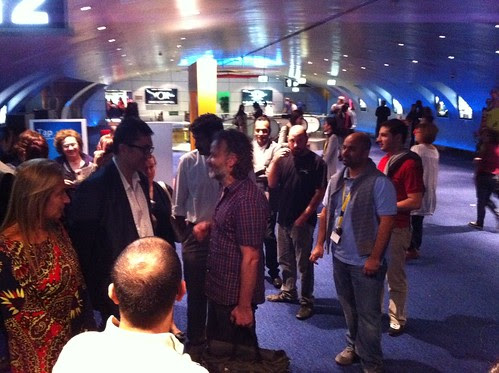 As for ONCE UPON A TIME IN ANATOLIA. It's truly a masterful film that, I think, surpassed THREE MONKEYS. I won't go that much into it because reviews of his films are easily accessible. But some of the very Tarkovskian flourishes in his film filled me with excitement and joy. See the trailer.

Yup, I definitely have lots to learn.

16, 17 and 18) HASAKI YA SUDA by Cedric Ido, RAFT by Nobuyuki Miyake and NAUSHNIKI(HEADPHONES) by Baktiyar Seitkaziev

These three are short films, also in the same category as mine.

This is a teaser of Hasaki Ya Suda.

No trailer for Miyake's RAFT, but here's a video interview of him at Dubai Film Fest.

19, 20 and 21) TINYE SO by Daouda Coulibaly, MEHFUZ (SAFE) by Rohit Pandey and FEBRUARY 19 by Tamara Stepanyan

Had another screening of LAST FRAGMENTS OF WINTER on the afternoon of December 13. I'll talk about that in another post.

After my own screening, I decided to catch the rest of the shorts in the AsiaAfrica competition category.

Here's a teaser of TINYE SO.


FEBRUARY 19//Trailer from Tamara Stepanyan on Vimeo.
A train between Yerevan and Tbilisi.

And a wall. A cold, white wall.


Unfortunately, I can't find any trailers of Mehfuz. MEHFUZ would end up receiving the second prize for the category, while TINYE SO got the Special Jury Award.

22) ENDING NOTE: DEATH OF A JAPANESE SALESMAN by Mami Sunada

Another Japanese documentary by a female director. And another sublime one. This is a very personal one where director Mami Sunada (who had been filming her family since she was 15) follows her father during the last few months of his life after he was diagnosed with terminal cancer. The 'ending note' of the title is like a bucket list and a will, written by him that summarized his own life and his final wishes (narrated in first-person by the director). I was reluctant to go to this film because of its depressing-sounding subject matter, but thanks to its gentle humour and sensitivity, the film becomes a very warm and bittersweet experience, as if you are accompanying a man (you gradually get to know well) to the end of his life, and staying briefly with his family after his death.

When the screening ended, not a single eye was dry. And everyone stayed for the Q and A session.

(the film did surprisingly well at the Japanese box-office).

That's me and Mami after the screening. 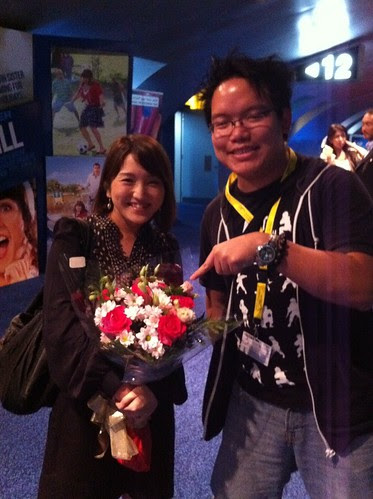 They make greatness seem effortless, but only if you overlook the amount of efforts they have actually put in their works. FILM BUSINESS ASIA had a great interview with both of them regarding the business of Japanese documentaries.

Sunada would end up winning the Second Prize in the AsiaAfrica Documentary category. Ide won the Human Rights Network Award.

The funny thing was when I mistyped EHDING NOTE as CLOSED NOTE (which is a different film starring Erika Sawajiri a few years ago, which, ironically, caused quite a stir because of Sawajiri's behaviour during the press screening, but that's a wholly different story...) 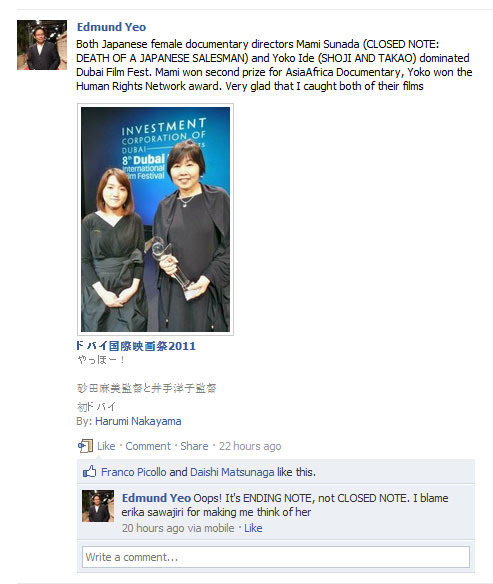