He is currently the oldest active director in the world (unless the Spanish director Miguel Morayta, who is year older than Oliveira and retired since 1978, suddenly chooses to come back to make another film) and has remained prolific since he made his first film in 1927. (he became exceptionally prolific since 1990, when he would make at least one film every year until now)

I can go on and on with this, but I will share with you an Oliveira tale.


Intrigued and curious (a lifelong virtue of mine, I humbly believe) to see the film of a then-101 year old director, I braved through the snow of Berlin city after going through the workshops of the Berlinale Talent Campus (which I was attending), hopping into one train after another, and then running around, trying to find the cinema. 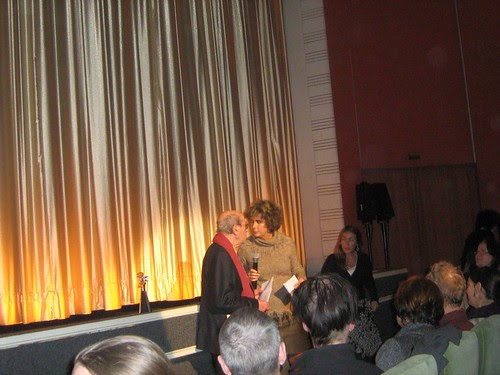 (Notice the Berlinale Camera trophy behind him.)

After that, Oliveira left, and the film began.

I paused a little after writing the above sentence, because I wanted to make sure what I said was accurate (about never seeing his films before). But after some quick search, I found out that I have indeed seen an Oliveira work on the big screen prior to the Berlin Film Festival. That was 2008, when I went to see the omnibus film "CHACUN SON CINEMA" (TO EACH HIS OWN CAMERA) in Eurospace, Shibuya. For his 3-minute segment, "Rencontre unique (Sole Meeting)", I wrote this in my previous post:

"Dialogue-heavy, I couldn't keep up with the (Japanese) subs again. So I didn't understand this, sorry."

It took another two years before I could finally watch my very first Manoel de Oliveira film, and it wasn't even on the big screen. His much-beloved 2010 film THE STRANGE CASE OF ANGELICA, which was a very unique experience that reminded me of Hong Kong films of the 1980s because of a man's romance with a ghost. There is something so whimsical about the film that you cannot believe it is by a 100+ year old director! (Look at his films, and compare it with the films of, say, the late Theo Angelopoulos)


Two weeks ago, I saw HISTORIC CENTER (Histórias do cinema) at Tokyo Filmex, an omnibus film with contributions by Oliveira, Aki Kaurismaki, Pedro Costa and Victor Erice. (I'll write about it later if I can)

And next year, he will have another film coming out.

Clint Eastwood (who is only 82) has said that he wanted to be like Oliveira, to never stop making films.

Yeah, I think world cinema is blessed to have someone like Manoel de Oliveira. To have a body of work that spans nine decades, it's just wonderful.
Email Post
Labels: Berlin International Film Festival 2009 Manoel de Oliveira Tokyo Filmex 2012