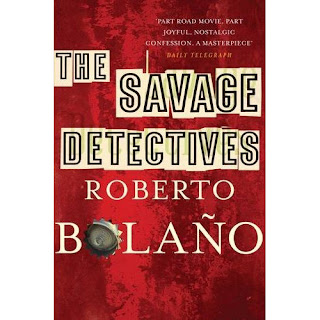 I discovered Roberto Bolano during my 2007 trip in Chile. That was my first ever trip to a film festival as an invited filmmaker (went there as producer for ELEPHANT AND THE SEA, which was in competition), and also a prelude of the many solo travelings that I would do after that.

My routine in these (film festival) trips has remained mostly the same. When I'm not attending the film festival, I would be taking solitary walks around recommended places, snapping photos, and then taking a break somewhere for food or coffee, in which I would take out a book to read. Otherwise, I would just head into a nearby bookstore to look through the books.

On the day that I was about to leave Santiago, I decided that I had a few hours to kill, so I went to the shopping mall next to my hotel and hung out at the bookshop. A few days earlier, someone had recommended Bolano's works to me, so I was curious to read them. There was a bookshelf full of his works, and I decided to check out his short story collection LAST EVENINGS ON EARTH, because it sounded like a science fiction novel (it really sounded like A. A. Attanasio's underrated sci-fi epic novel THE LAST LEGENDS OF EARTH, right?)

Of course, when I went through the short stories, I realized there was nothing remotely science fictionish about them at all. They were all stories narrated by struggling writers living at the margins. I think I only got through a 2-3 stories before I had to rush to the airport, but he left an impression.

In the few years since then, I have bought 2666 at a bookshop in Roppongi, which I have yet to read because I wanted to read THE SAVAGE DETECTIVES first.

I started THE SAVAGE DETECTIVES early last year. I went through the first section (book is divided into 3 sections) very swiftly. It's narrated by a 17-year-old aspiring poet named Juan Garcia Madero and chronicles his encounters with a group of poets who call themselves the "Visceral Realists", and also his string of love affairs.

The second section (which is two thirds of the novel's entire length) is a sudden shift in style and is the centerpiece of the novel. Spanning twenty years with dozens of narrators, it is a series of interviews with people (around the world) who had contact with the two leaders of the Visceral Realists, Arturo Belano and Ulises Lima. The book becomes as much about the two as it is about the narrators, and also the time and place around them.

Due to the density of the novel, and also because the novel I read before this was Gao Xingjian's SOUL MOUNTAIN, I was too mentally exhausted. So I took a break from it after reaching the 200 page-mark. That was around May 2013.

I went to read (relatively) lighter books, like Ruth Ozeki's wonderful TALE FOR THE TIME BEING, and a few collection of short stories (Raymond Carver's CATHEDRALS, Junot Diaz's DROWNED and Li Yiyun's GOLD BOY, EMERALD GIRL) before resuming with THE SAVAGE DETECTIVES early last month. By then, I had already been 8-9 months since I last read the book.

The reason why I was able to put the book aside for such a long time, I think, is mostly because I had it in digital form. Even though it was in my phone the whole time, it doesn't "remind" me to read it. A normal book is different, it takes up space, pretty much reminding you all the time that you have yet to finish it, screaming at you. (and I generally prefer normal books over ebooks)

Even so, what I've read from the book was enough to inspire me to make references in a few film treatments I wrote last year, it's highly possible that I divided my feature film RIVER OF EXPLODING DURIANS into three sections because of THE SAVAGE DETECTIVES. And in another treatment, there were appearances of anarchist poets who call themselves Visceral Surrealists... very original, me.

It wasn't difficult to go back to reading SAVAGE DETECTIVES. The numerous "interviews" were almost standalone stories that happened to be connected by a few recurring characters.

And then, Section 3 brings us back to Juan Garcia Madero, resuming his story from Section 1. By then, after going through Section 2, and having advanced knowledge on what was going to happen to some of the characters in the future, everything became a little sadder, a little more melancholic.

What's outside the window?

That was the last line of the book, with a pictographic riddle.

I smiled at its ambiguity, its open-ness. Suddenly, I imagined interpreting the ending with visuals and was overwhelmed by an urge to make a film. That's the beauty of reading a great novel, unexpectedly, I would be flooded with ideas. The utmost desire to create. Maybe that was what I saw outside the window.

It was afternoon that day, I was in Bali. At a film set of a film shoot that I wasn't involved in, all I could do then was to sit at the corner to read the book. When I was done, the feeling was glorious.

“Of all the islands he'd visited, two stood out. The island of the past, he said, where the only time was past time and the inhabitants were bored and more or less happy, but where the weight of illusion was so great that the island sank a little deeper into the river every day. And the island of the future, where the only time was the future, and the inhabitants were planners and strivers, such strivers, said Ulises, that they were likely to end up devouring one another.”