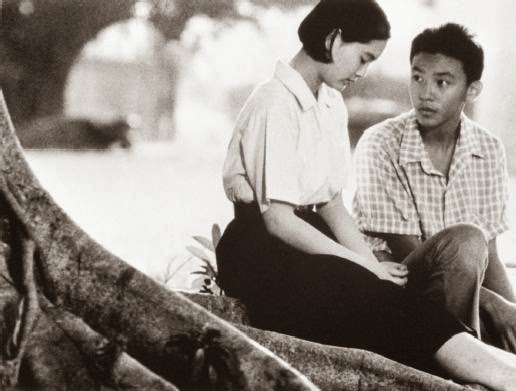 
Last December, it started out as a Hou Hsiao-Hsien marathon. The original intention was to watch films directed by Hou Hsiao-Hsien, but I ended up watching the film which featured his one and only starring role. Edward Yang's TAIPEI STORY (Hou was also the producer).

And because of this, I finally completed every single Edward Yang film in his oeuvre. Unintentionally. Because I didn't want it to end so early.

One of my favourite directors ever. And, in my opinion, one of the greatest. His works had influenced me a lot. I wrote more about my own experiences with the works of Edward Yang in June 29, 2012, marking the 5th anniversary of his death. That was before I watched MAHJONG and the first two films of this career, THAT DAY ON THE BEACH and TAIPEI STORY (I watched both in 2013, on Youtube, because both films are notoriously difficult to find).

The first Edward Yang film I saw was YI YI, that was 2007, shortly after his death. I was mesmerized by his brilliance. YI YI would become my main influence when it came to editing Ming Jin's films telemovie DAYS OF THE TURQUOISE SKY (2007), because its ending, where the protagonist summarized his thoughts on CATCHER IN THE RYE, was a homage to YI YI's ending.

And especially WOMAN ON FIRE LOOKS FOR WATER (2009), because it intercuts between the story of a dying father's unfulfilled romance, and the son's ongoing love triangle.


In late 2009 (or was it early 2010?), I caught my second Edward Yang film, the 4-hour masterpiece BRIGHTER SUMMER DAY. That blew my mind. Because of scenes like these:

I would love to watch the restored version on the big screen, at least once, in this lifetime.

I'm afraid of finishing a deceased director's oeuvre because there wouldn't be anything else for me to watch anymore. It's a little like not wanting to finish a book, because you just don't want it to end. I slowed down after that. So it took me almost 3 years to watch another Edward Yang film.

Early 2013, I found the entire THAT DAY ON THE BEACH on Youtube. Image quality was a mess, but it was the only way for me to watch the film. The film also marked Christopher Doyle's debut as a cinematographer.

This is its beginning.


During the Hou Hsiao Hsien marathon last December, I decided to mix in MAHJONG between Hou's THREE TIMES and GOOD MEN GOOD WOMEN, because... well, Hou's films were quite dense and heavy, and since Mahjong's supposed to be an Edward Yang "comedy" in the vein of CONFUCIAN CONFUSION, I needed it.

Once I was done with MAHJONG, I realized TAIPEI STORY was the last Edward Yang film that I have yet to watch. Sadly, like THAT DAY ON THE BEACH, I could only find a VHS transfer of the whole film on Youtube.

So it's finally over, now i can tell people that I have seen every single Edward Yang film. My favourite remains BRIGHTER SUMMER DAY (with YI YI as a close second), my least favourite is MAHJONG (which is still all right, in retrospect, but doesn't measure up to his masterpieces. The white actor bothered me)
Edward Yang