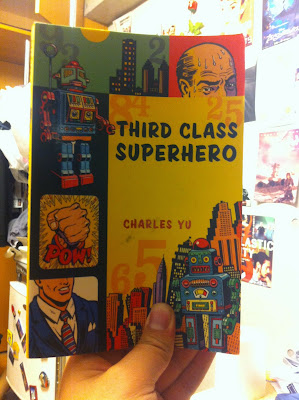 I bought this book at least 2-3 years ago. (Probably closer to 3 than 2, I am not sure) It was an accident, I was ordering a graphic novel on Amazon, this book was recommended to me, I figured it was another graphic novel (by an Asian American artist? okay!), so I bought it too.

The next day, when the books arrived, I was surprised that Charles Yu's THIRD CLASS SUPERHERO turned out to be a collection of short stories, and not a graphic novel ("whaaat? no pictures?" I whined to myself, becoming a parody of people I despised)

Because I had so many other books to read then, I put it aside. Years passed. It was then left in a box at the corner of a room in Tokyo that I left vacant for ten months. I found it again only a few days ago, in the almost-forgotten box with my almost-forgotten stuff that I left here.

Having spent the entire week working on the music of RIVER OF EXPLODING DURIANS with my composer, I finally got to rest. Yesterday evening I was supposed to go to Ogikubo. A train ride there would take 16 minutes, return trip would be 32 minutes. So I took the book along with me and spent the whole time reading. In that amount of time, I managed to finish 2-3 of the 11 short stories in the book. I was intrigued.

After a night and a day, I finally finished the book. There are some stories that stood out to me:

Then one day I woke up and my mother had gotten old. And I had become not so young. And I went to my desk to look at the story and there were hundreds of new pieces, a secret store of senseless hurts, routine indignities, pointless hours. All of my work, all of the partial narratives I had been pasting and stapling and forcing together. It was all junk. "The Story of My Mother" had to include more fragments, more ingredients, more random intervals than I had ever imagined. And right then and there, I realized for the first time that I was not good enough to write it, realized that it was quite possible I would never be good enough, even if I had a thousand years. I realized that writing the story of my mother will require someone who can leave it all hanging, someone comfortable with ambiguity, someone with the ability to leave things out. I don't know how to do any of those things.

The other I really liked was 'Florence' (click link to read the entire short story!), a scifi tale (scifi in an Italo Calvino Cosmicomics style) set million years in the future where each person is living in isolation on a planet and each message between people takes a few years to arrive. Centuries passing in the blink of an eye. It is about a lovelorn man asking a woman to move to his planet.

Why do you always want us to be--

Close enough for us to breathe the same air.

You know what I mean, Tina.

Well, at some point some of the molecules of the air you're breathing were probably in my lungs. Eventually we'll breathe the same air, drink the same water, pass through our bodies the same molecules. Eventually.

You know what I mean. In the same room.

You can't see me.

Right. I think of being together as being able to see you.

No, answer me. What's close? What would be enough for you?

There are gaps. When we talk. Long gaps between everything we say to each other. Delays are a fact. Gaps are a fact.

So it's time then. That's what this boils down to. You don't want to spend the time.

Everything has to have a cost associated with it. Everything has to cost something, and time is the price mechanism for the universe. Time is not so difficult to understand. Time has never been the mystery to me.

It's distance. You're there and I'm here.

And for some reason, images from the science fiction sequence of 2046 started playing in my mind. Beautiful female androids walking through moving trains with blinking high heel shoes, loved by men who are unable to change, in an eternal struggle against time.

The very fine "The Man Who Became Himself" is also available in its entirety here. A reverse of Kafka's Metamorphoses, this is about a man who starts to think of himself as "he" instead of "I", as if he's inhabiting the body of another. Is it a metaphor of a middle-aged man who is becoming conscious of everything in life? From the memories of his past to his estranged wife? Or is it a tragedy of a man who is becoming more detached from life?

This is its beginning:

He was turning into something unspeakable.
At the office, people avoided the issue.
David, they would say, how are you? You, they said. To be polite.
Others noticed but pretended not to. As if they weren’t always staring and whispering and wondering. Assuming it could never happen to them.
David, for his part, played along, glad to make small talk. He asked about their children, looked at pictures of dogs and cats and trips to Tahoe. David moved his mouth, made the right sounds, gave people what they expected. The men talked about sports, mostly, and the women, if they could help it, usually didn’t talk to him at all.

But the ending was surprisingly tender and heartwarming. I'm not going to spoil it, you go read it. :)

(BTW: for an even more recent reversal of Kafka's Metamorphoses, you can check out Haruki Murakami's 2013 short story Samsa In Love)

There were more fine short stories in the book that left me in a state of melancholy, or inspired, or both.

I liked what Charles Yu said in this exchange with Shawn Andrew Mitchell on Fiction Writers Review because it seems to relate to how I approach filmmaking as well. Putting it here. As a reminder for myself.

Shawn Andrew Mitchell: A lot of your fiction plays around with time. Not just in a time stamp way, though some of them are set in the future or have time stamps or references to The United States of China. How do you think about time as you’re working on your fiction?

Charles Yu: A story is most interesting to me as I’m writing it if I’m doing something strange with the time signature. I find that I’m the most dead and my writing is the most lifeless when I’m telling a story in a relatively conventional, chronological way. I think that in some ways a novelist’s raw material is time itself. What you do with it, how you compress some events or skip over them or take parts of the past and stretch them out so that they touch the future. I’m imagining a kind of malleable material. That’s what we’re messing around with most often.
And maybe I’m just speaking for myself as a reader, but that’s what I’m most drawn to. I don’t even think that’s necessarily a genre or sci-fi thing. I just read Alice Munro’s latest collection, Dear Life, which I thought was brilliant, and she’s incredible at that—she can jump within a sentence or two back into some character’s distant past. She’s a master of this swirling kind of non-linear way that your mind lives through time. And that’s what I think Nicholson Baker does too. He does it in The Fermata the most explicitly, since it’s about this guy who can stop time. But he does it in his other books too, where there’s this kind of special quality to the passage of time that’s very strange.

Is it an intuitive thing for you when you’re writing, figuring out how to carve up time and shape it, or do you start with some kind of external framework in mind?

Probably more the former. It’s intuitive in that I want to stumble on it, and I don’t know if I’ve done it many times. There’s a story in my first collection called “Florence,” about a guy who’s all alone on a planet and his job is to watch a shark who just swims around all day. It’s on a time scale that’s very long. And the planet’s very distant. He only gets visited once every X number of decades, and it’s the person who’s dropping off food for the shark. That story was playing with large time scales, but in a very overt way, same as the novel. I want to be able to do that intuitively. My goal is to have that Munrovian gift of being able to fool around with time, which I’m sure is just part of what writing is to her. A lot of the writers I love, even just within straight realism, are so good at jumping back and forth between memory and the present. I don’t think I have any kind of grasp on that. I have to really think about it and then try to do stuff and it doesn’t always work.