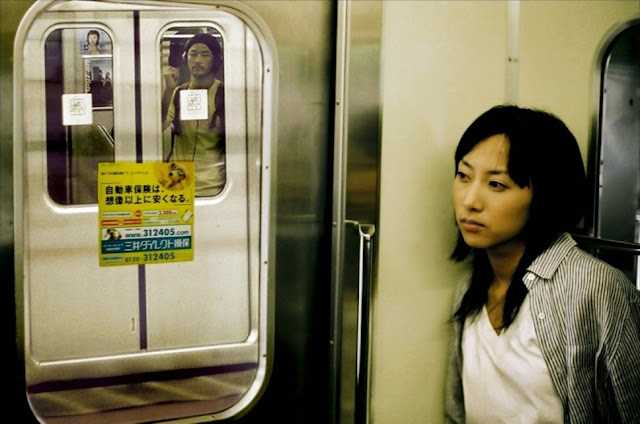 A few days ago I decided to catch The Amazing Spider-man 2 in Shinjuku. The only available ticket was the 10pm show at night, I bought it and went to Akihabara for a walk.

Wandering aimlessly, I found myself at an area that I've never been to before.


A flight of stairs that led to the Kanda Shrine.

The view from the top of the stairs was fascinating.


I continued my way, crossing a river, I saw a vaguely familiar view.

It was evening and the sun was about to set, the wind was soothing, and I stayed for a while, waiting for the passing trains. They were headed to different directions, but sometimes they converged at the same spot.

I suspected that it was the same location seen in the final shot of Hou Hsiao-Hsien's 2003 Japanese film, Café Lumière. But I dare not confirm anything since my memory is vague. It's been 4 years since I've watched the film (that was the second Hou Hsiao-Hsien film I've ever watched, the first was Millennium Mambo)

Moments later my suspicions were confirmed.

I have fond memories of Café Lumière, I think it's one of those rare Japanese films by a non-Japanese director that felt natural. The culture and everyday life were depicted gently, without any intention to exoticize anything. The filmmaking was a homage to the late great director Yasujiro Ozu, with the use of pillow shots and such, but these respectful homage didn't feel blatant or out of place.


It's also rather coincidental that the last few days I was reading a Hou Hsiao-Hsien book that I bought in Hong Kong a few weeks ago. In fact, I was carrying that book with me exactly when I walked past the passing trains near Ochanomizu station.

Because of this beautiful coincidence, I decided to pore through some articles about Café Lumière yesterday, and I particularly liked Genevieve Yue's "The Light Outside The Window", a piece about the film on REVERSE SHOT. Maybe because it seemed to coincide with the ending of Bolano's THE SAVAGE DETECTIVES that I just finished reading a while ago. What's outside the window?

It's both insightful and poetic.

the characters spend much of their time on trains, as if to suggest that being in the city means moving through it. While another film might cut directly from location to location, Café Lumière is more concerned with how people get to where they’re going, and what happens in such moments of transition. The space of the city, it contends, is not made up of the closed interiors of homes and buildings, but in the interstitial connections of the train, its fleeting encounters, and the possibilities that arise from the closeness of strangers.

In Tokyo, the Yamanote train circles the city, and though subways run throughout the area inside the ring, there is no clearly defined center. Where, then, is the heart of the city? Café Lumière was shot largely on the Yamanote line, an impressive feat given that no permits were ever issued.


Having lived in Tokyo for a few years, I agree that being in the city means moving through it. Wasn't that how I stumbled upon Ochanomizu Station?

And its final paragraph:

Early in the film, Yoko is on the phone with Hajime, recounting a dream in which her child is stolen by a goblin and replaced with a baby made of ice. He later identifies the dream as the story from Maurice Sendak’s Outside Over There and gives her the book, which she reads on the subway and takes back to her apartment. The tale is a kind of metaphor for Hou’s cinema, with transformations so subtle they often go unnoticed. And though Ida, the girl in the story, doesn’t immediately recognize that her infant sister is gone, her tenderness is real. It connects her to what’s been lost, and what’s yet to come. Over an image of the girl cradling the frozen bundle, Yoko softly reads to herself and perhaps to her unborn child: “How I love you.” When she arrives at the scene where Ida climbs outside her window to “outside over there,” she puts the book down, gets up, and stands at her own window. As she has done many other times in the film, she opens the window and looks out for a long time. What is Yoko’s “outside over there?” It is a threshold of seeing, both hers and ours, for what she observes is never revealed, and with her back to the camera, we can only imagine what she might be thinking. For Hou, “over there” may be Tokyo, but it’s also Yoko, a woman and a city, each bound up with the other, inscrutable and ever changing. At the Ozu Symposium in Tokyo, on December 12, 2003 (the birth and death date of Ozu), where Café Lumière was premiered, Hou cited in his address a quote by Hoffmannsthal from Italo Calvino’s Six Memos for the Millennium: “Depth is hidden. Where? On the surface.” And with Hou, where hardly anything is as it appears, the window view is the deepest of all.