Rediscovering productions photos from CHICKEN RICE MYSTERY, my first ever short film in 2008 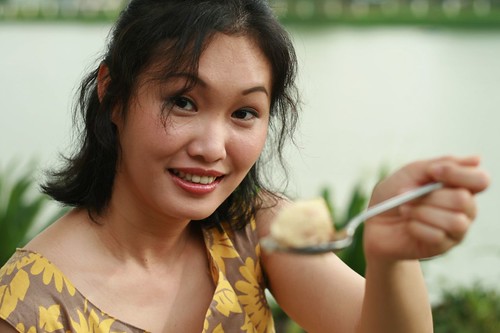 In the last few months when I worked on my debut feature RIVER OF EXPLODING DURIANS, I couldn't help but remember my own experiences of six years ago, when I was shooting my first ever short film, CHICKEN RICE MYSTERY, in 2008.

It's been six years, and I've done countless projects since then. But the fresh feeling of working with a professional cast and crew for the very first time continues to linger in my mind. Nothing makes me feel more excited than a film shoot, and it's a good thing that nothing has changed in these six years.

A few days ago, when I tried to clean up an old hard disk, I found old photos that were shot by Nikki during the CHICKEN RICE MYSTERY shoot. Seeing them again make me feel nostalgic, it was funny to see that my sister and my cousin (the real Cousin Choong, I named a character after him in DURIANS) were both involved in helping out.

I generally have a lot of disdain for people clinging on to past glories. I feel that they do that because they didn't achieve much recently. When life is like climbing a mountain, should I even bother telling everyone about my adventures on the foot of the mountain? My "next" film is my "best". This is all I want to believe, otherwise, what is there to fight for?

Even so, because CHICKEN RICE MYSTERY was my first, I will always remember it, and also remember it for helping me win my first awards as a film director. I'm a walking contradiction.

While a few photos from CHICKEN RICE MYSTERY were uploaded on my Flickr account long ago, I decided to upload more photos yesterday on Facebook, to help everyone reminisce of happy old times, to remember the nice connection we had during the shoot, the friendship that were forged or reinforced then. It's hard to explain the unique experience of a smooth film shoot where everyone was there for passion and fun.

I rather enjoyed the wacky photos of me directing.

Mei Fen, my assistant director from back then, had become a regular actress in numerous local TV series, and was nominated twice for Best Actress in the last two editions of BMW SHORTIES, for her amusing performances in the short films DA CAPO and THANKS FOR SAVING ME by young director Tan Ce Ding. I actually introduced her to him. I'm glad they had such a fruitful creative partnership.

Yet six years ago, she was the only one who answered my call when I was desperately searching for an assistant director.

These days, I see her in Ah Huat White Coffee ads everyday during the halftime of World Cup matches on Astro. Whoa.

The actual cast of CHICKEN RICE MYSTERY was absolutely colourful for a first-time director like me. Never had I imagined that I would have a screen legend like Lai Meng cameo-ing in my film (this was shortly before she flew of to Singapore to shoot her Golden Horse-nominated role in Jack Neo's MONEY NOT ENOUGH 2)

I wrote the CHICKEN RICE MYSTERY script shortly after I saw James Lee's film BEFORE WE FALL IN LOVE AGAIN. In my mind, I thought the lead in that film, Chye Chee Keong, would have been perfect in my film.

I ended up having BOTH Chye Chee Keong and James Lee in CHICKEN RICE MYSTERY :D

My friends, blogger Suanie and film producer Aron were there to cameo in my short film too.

Ming Wei, the child protagonist of my film, was previously in Liew Seng Tat's award-winning FLOWER IN THE POCKET.

Lead actress Kimmy, who later won an award at BMW SHORTIES for her performance, is actually more of a theater director.

We would collaborate again, a few months later, on my short LOVE SUICIDES (2009).

You can watch CHICKEN RICE MYSTERY here if you want to, it's very very different from my subsequent works.