Finishing up the SECOND LIFE OF THIEVES post-production in Bangkok 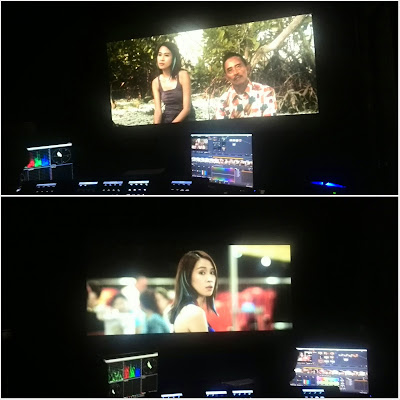 I came to Bangkok almost a week ago to finish up the post-production for both SECOND LIFE OF THIEVES (which I produced, co-wrote and edited) and RIVER OF EXPLODING DURIANS (which I directed).


We were in a hurry because SECOND LIFE OF THIEVES, directed by Woo Ming Jin, will be making its world premiere at the Busan International Film Festival in early October. Colour grading had to be done, then sound mixing, before we finalize everything into a DCP (Digital Cinema Package), which is used in most film festivals and cinemas these days.

Here's the Facebook page for SECOND LIFE OF THIEVES.


Bangkok, of course, is known worldwide for its top-level postproduction services. In fact, Wong Kar Wai's last few films, namely 2046 and THE GRANDMASTERS were done here.

So, the postproduction of SECOND LIFE OF THIEVES was done at White Light Post, a postproduction place headed by Lee Chatametikool, the multiple award-winning editor of Apichatpong Weerasethakul's films (and also a director himself, his debut film CONCRETE CLOUDS premiered in Busan last year and he's been busy the last few days preparing for the nationwide release of this film)

Watching our friends in Thailand work on these films is quite an educational and inspiring experience. After spending so many months seeing the raw footage of the film in its flat and desaturated form, it was mindblowing to see the film in how it was supposed to be seen on the big screen.

Having owned the Blackmagic Cinema Camera for a year and a half, SECOND LIFE OF THIEVES was the first time we shot our film on Raw instead of on Prores, so I never got to witness the camera at its full power until now, and this wouldn't have happened if the colour grading process was done at the hands of lesser people either. I used to do my own color grading for the films I shot on DSLR (Last Fragments of Winter, Exhalation, Inhalation etc.), but a Blackmagic Cinema Camera-shot footage is an entirely different thing altogether. Makes me yearn to learn how to use Da Vinci Resolve (the color grading software).