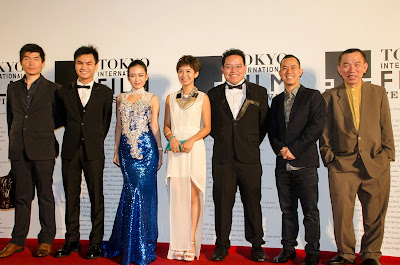 I finally got back from Tokyo.

The Tokyo International Film Festival in the past 10 days had been absolutely emotional, and inspiring. I will now take the time to update the blog with Facebook posts (not just mine, but others too) of the wondrous journey RIVER OF EXPLODING DURIANS had taken during its world premiere in this grand, prestigious festival. It all felt like a dream.


We all arrived at 22nd night, just in time to walk the red carpet on the 23rd.

I was there with dad (executive producer), Ming Jin (producer), Kong (cinematographer) and our three leads, Koe Shern, Joey Leong and Daphne Low.

After the red carpet event, I was whisked off to do a radio interview.

Alas, I had to miss the opening film BIG HERO 6.

24th of October, RIVER OF EXPLODING DURIANS had its world premiere. We were the competition film to premiere in the festival. There was a press conference in the afternoon before the film.

This is the video of the press conference.


This was what I said at the press conference:


“I do feel strongly about history. A lot of the historical events portrayed in the film are unspoken history that’s not officially in textbooks. They’re not spoken about due to political reasons. So for me personally, I believe a lot in the power of cinema. To some people, movies just might be for entertainment. But for me, I believe that we use cinema to remember the world. So I always believe that cinema is forever. So if I can put all these historical events that are not spoken aloud in this film of mine, would people remember? So this is my intention – to help people remember all these events.”

“For me, I basically wanted to ask questions in my film. I didn’t want to openly complain or condemn things – because I feel that people have been doing that a lot – on facebook. For me it’s real tiring, going online everyday – and you know, it’s just people complaining about the government or people complaining about the opposition. I just want to ask questions. I think it’s a very Malaysian thing that we always complain about things. I think it’s very stupid. I think we should be thinking more. So, I just want to ask questions so we can contemplate. And the reason why I wanted to bring historical events from the past, like the Thai incident, the Filipino incident, is because they were in our neighboring countries and there are some parallels between what happened then and some stuff that happened to us. So, my question is; if we continue doing what we are doing, is history going to repeat itself or should we try something different so we can be more hopeful?”

After that, we visited the film festival staff members and volunteers.

As evening was about to come, we started preparing for the world premiere of the film. Ming Jin the producer, me, the 3 lead actors of the film Koe Shern, Joey and Daphne, along with Kong the Cinematographer, all went on stage to greet the audiences.

Everything we had been working towards since January 2, 2014, it finally led to this moment. The world premiere, the one moment when the film would be shown on the big screen, in a huge hall with a 700-ppl capacity.

Post by Edmund Yeo.
When it ended, I was too overwhelmed with emotions.

I wrote this the day after the screening:

Last night's world premiere of River of Exploding Durians felt like a dream. Realizing that it was the very first public screening of my very first feature film at the gigantic Screen 7 of Roppingi Hills, I was really quite choked up with emotions when I was invited back on stage for the Q and A session. But when I was brushing my hand across my eyes a few times at the beginning of the session, I was really just brushing off sweat, nothing else. The light was... too strong.

All the hard work that the "Durians family" had put in the film can finally be seen on the big screen. The wonderful cast and crew, those who were in Tokyo with me, Woo Ming Jin, Kong Pahurak, TK Cheng, Koe Shern, Joey Leong, Daphne Low, Eric Yeo, and those who weren't.

When it ended, I could only think of them.

We are just a group of crazy, passionate people making a low-budget film.

I was so happy that Kohei Ando-sensei and Mrs Ando were part of the screening, with Miyako Kobayashi and Naoki Motomura senseis. Waseda University was my home when I was in Tokyo. What a beautiful way to come back home. And the audiences, their kind words, their applause, I tried to look and remember the moment, but my eyes were a little too blurry when the film ended. Probably the sweat again.
(even my cousin Cheryl Choong, who was visiting Tokyo, was at the screening, with Jones Khoo. I hope both of you enjoyed my wedding gift )

And thank you so much, Iwai Shunji, for coming to the screening too. Without your films and your influences, which had stayed with me from my teens ("Love Letter") to my university days in Perth ("All About Lily-Chou Chou", "Hana and Alice") to the beginning of my film career, I would never have been able to make RIVER OF EXPLODING DURIANS too. Being visited by my hero on the very first screening of my very first feature film, that is an unexplainable feeling.