Rest in peace, Manoel de Oliveira, the oldest film director in the world 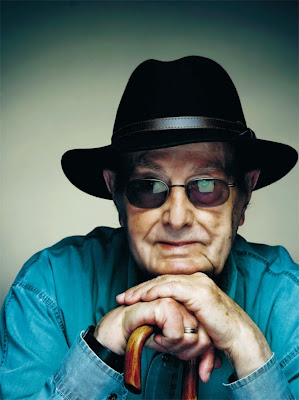 Manoel de Oliveira, the oldest working director in the world, passed away three days ago, on the 2nd of April. He was 106.


Portugal paid its final tribute to him yesterday before his burial.

I have written about him on 2012 to commemorate his 104th birthday. In my post, I wrote about my experience of trying to catch his film at Berlinale 2009.

Intrigued and curious (a lifelong virtue of mine, I humbly believe) to see the film of a then-101 year old director, I braved through the snow of Berlin city after going through the workshops of the Berlinale Talent Campus (which I was attending), hopping into one train after another, and then running around, trying to find the cinema.

Screening of Manoel De Oliveira's ECCENTRICITIES OF A BLOND-HAIRED GIRL. At the time, Manuel De Oliveira was 101 years old.
Posted by Edmund Yeo on Tuesday, August 21, 2012


After that, Oliveira left, and the film began.


So forever, this would be how I remember Manoel de Oliveira. With a tinge of regret, and some hint of humour. Just like his films.

I never had the chance to catch a Manoel de Oliveira feature film on the big screen, but I have twice seen his works in an omnibus film, both in Japan.

The first was the Recontre Unique (Sole Meeting) segment in the 60th anniversary Cannes Film Festival omnibus, Chacun son Cinema (To Each His Own Cinema). Although I didn't exactly follow his segment at all because I couldn't keep up with the Japanese subtitles due to my rudimentary Japanese skills. His segment was a silent movie. There's a pope. Also accompanied by Debussy soundtrack.

The second was his rather funny segment that concluded the HISTORIC CENTER (Histórias do cinema) omnibus film, which featured him and three other directors: Aki Kaurismaki, Pedro Costa and Victor Erice.

Therefore, the very first Manoel de Oliveira film I really saw in its entirety was THE STRANGE CASE OF ANGELICA, which is arguably his most famous film internationally during the past decade. The film was whimsical, but also coloured by undercurrents of melancholy. A protagonist who falls in love with a ghost, and finds himself perpetually disconnected from the rest of the world, his fascination is only with the past.

I couldn't believe that it was a film made by a director who had lived for more than a century, but then, perhaps it was because he had lived for a century that the emotions of the film felt genuine, and you could suspect that the photographer protagonist (played by his grandson, Ricardo Trepa) was a surrogate for Oliveira.

It blows my mind when I realize that many of the long-departed legendary directors I mentioned above were actually even younger than Oliveira!

For me, he's an inspiration. To think that he became supremely prolific beginning from the 1990s (after he reached his late 80s) and was averaging at least a film a year. There wasn't any slowing down, he just continue doing what he loved, for cinema. What a life!

Manoel de Oliveira, the world's oldest working director (and a great one!) had just passed way at the age of 106. Rest in peace. Probably flying through the sky like Angelica did.
Posted by Edmund Yeo on Thursday, April 2, 2015


Manoel de Oliveira is indeed an inspiration. Being able to make films until you are 106, films feeling increasingly youthful. 106 is indeed too early.
Posted by Edmund Yeo on Thursday, April 2, 2015


In the past few days since his death, there had been many great tribute articles about him which made me wish that I've seen more of his works. I can always start now. The beauty of cinema is that there will always be countless great films from past, present and future waiting to be seen.

The NYT obituary for Manoel de Oliveira, a Portuguese filmmaker who was almost as old as cinema itself http://t.co/sIcj5gFFh0
— The New York Times (@nytimes) April 3, 2015


For me, what lingered more in the past few days were videos him dancing.