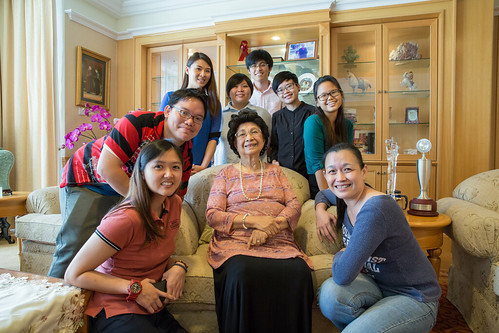 Last Monday, for the documentary that I am currently working on, I had the honour of interviewing Tun Dr. Siti Hasmah at her office. She had been a role model for Malaysian women (and men) for more than six decades, and played an important role on developing the modern sports of the country. She is also the wife of former Prime Minister Dr. Mahathir.

Aside from being one of the first woman doctors in our country, Tun Dr. Siti Hasmah is known for her love for badminton. We interviewed her about the Thomas Cup (which is like the World Cup of badminton), from our great triumph in 1992 to our heartbreaking loss in 1994. To the number of times when we got into the Finals of the Olympics and how close we were from scoring our very first gold medals (to this day, Malaysia had never won any gold medals in the Olympics)

I was 8 years old when we last won the Thomas Cup in 1992, I was watching it from a hotel room in Singapore with my parents, therefore I still have memories of that tournament, like many others in the country. However, to hear her vivid description of the behind the scenes mechanics, the preparations of the players, the electrifying audiences of the stadium and their thunderous applauses, the tears of joy, both the players and her own, I found myself being transported to that historical moment. The emotions within her voice was palpable. She also reiterated that we had to remember the forefathers of these champions, as in, badminton heroes of previous eras who opened the road for us.


She was very nice and friendly, shook hands with every single one of the documentary team members when she arrived, and doing the same again when she left the room. Offered us coffee and tea, along with some snacks. It was a humbling and memorable experience.

My mother was rather excited that I was interviewing Tun Dr. Siti Hasmah, as I was finishing and was about to leave the place, mom sent me a photo.

It was an old photo of my parents and Tun Dr. Siti Hasmah, from an event more than twenty years ago. I recognize the photo, because for a long time, that photo was placed in my parents' bedroom.

Because of that, I was tempted to put the photos together. Past and present. To digest the fact that my parents and I, two different generations, had met this extraordinary woman, in different times, under different circumstances.

In the early 90s, my parents managed to meet Tun Dr Siti Hasmah, wife of then Prime Minister Dr Mahathir.

20 years later, I myself had the honour to meet her too, along with my zany documentary crew. (our interview was conducted with a lot of caution because it was done in her office and Dr M's office was just next door!)

Comparing the two photos, mom said I look a lot like dad, but some said I'm more like a fusion of both.

Known to many as the "Mother of Modern Malaysian Sports", and also her passion for badminton. Tun Dr Siti Hasmah is nearly 90 now, but she was able to describe vividly our great 1992 Thomas Cup triumph, and our heartbreaking 1994 loss. The emotion in her quivering voice was palpable.

It's so difficult to explain Malaysia's love affair with badminton, it's somewhat similar to Brazil's relationship with football. The Thomas Cup is like our World Cup. We were the best during the post-war period, but we had also gone through a couple of "1-7"s too over the decades.

There were many badminton heroes from the past who played to serve our country. The last three months of uncovering their stories had been enlightening and emotional. Hopefully it'll be soon when we can share these stories with everyone else smile emoticon

Directing a documentary is pretty fun! 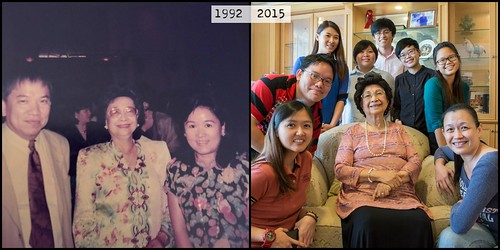 It's a blessing when you get to meet legendary public figure that you admire. It's amazing to get to listen to stories that were shared to us today by #motherofsportsmalaysia #motherofbadmintonmalaysia #tunsitihasmah, our former Prime Minister Tun Mahathir's wife. Although I was in pain trying to hold still of a monopod as tripod I still enjoyed the sharing very much. I love my job. #passionatewithwork #producer #videographerslife
A photo posted by @pennyl13 on Jun 8, 2015 at 6:21am PDT


Tun Dr. Siti Hasmah also plays the violin and the piano. If you look at the following videos, her music choices are interesting, Teresa Teng's Yue Liang Dai Biao Wo De Xin (The Moon Represents My Heart) with the violin, and the Godfather theme song with the piano!