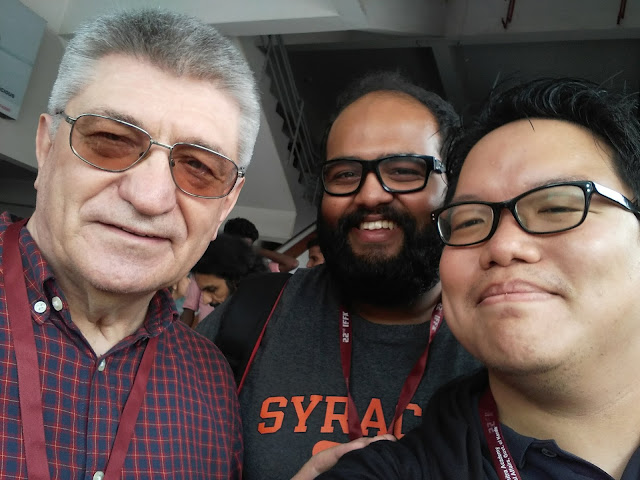 The year is about to end, before it does I want to write about the International Film Festival of Kerala, which happened from Dec 8 to Dec 15, 2017 (I was there from Dec 7 to Dec 16, stayed throughout the duration of the festival). AQÉRAT was having its Indian premiere at the festival, as an opening film of its brand new section, Uprooted: Films on Identity & Space, which are mostly films about refugees, displacement and search for identity.

The last time I ever been to India was 2007, so it took ten years to revisit the country. And Trivandrum, the city where the festival was held, was both familiar (reminds me of certain places in Malaysia) and not (the amazing audiences, the passion people have for cinema, it's one of a kind)

Each screening venue were huge auditoriums or theatres with a capacity of more than 800 people, with some of them seemingly meant for thousand over audiences. And having attended many screenings at the festival, it was amazing to see that the screenings were usually full, whether it was a 9am screening, regardless of the film, be it an arthouse film or a local Bollywood blockbuster, or an indie Malayalam film... or even my film. There would always be a long queue. And during Q and A, audiences would ask highly thoughtful and educated questions about the film. It was said that cinema is embedded within the blood of everyone there, from what I saw, I can't argue with that.


Aside from films, I also had a Tokyo Film Fest reunion with director Semih Kaplanoglu! (His new film "Grain" won the Grand Prix at Tokyo, while his previous film Honey was the Golden Bear winner at the Berlin Film Fest in 2010), having been too busy during the Tokyo Film Fest, it was great to finally catch his film in Kerala.


Aside from reunion with old friends, I also got to make new friends!


I even get to meet Alexander Sokurov, one of my heroes! He was there to pick up a Lifetime Achievement Award. Many thanks to the festival for doing a Sokurov retrospective, and a talk session with him. 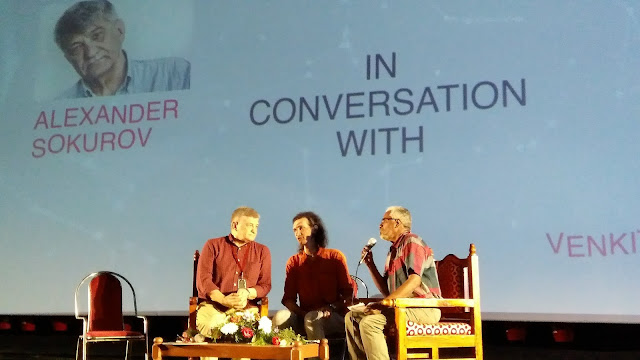 1) The Insult (dir: Ziad Doueiri) (opening film)
- This is when I experience the Kerala Film Fest crowd response for the very first time. People cheering, whistling and clapping their hands during moments in the film. Triumphant moments, when protagonists finally choose to do something decent, or a withering one-liner comeback, etc. A film about reconciliation of historical pain.

2) Sweet Country (dir: Warwick Thornton)
- For some reason, as I sat through this film, I was reminded of John Hillcoat's The Proposition, which I saw in 2005 at the Luna Theater in Fremantle. I was still studying in Perth, and naturally I was curious about the state of Australian cinema. I made a point to catch a few films in the cinema, but The Proposition left the deepest impression.


3) Angels Wear White (dir: Vivian Qu)
- I was vacationing in China last month when the film had its theatrical release. Although there were three multiplexes close to my hotel in Xiamen, none of them were showing this film. I'm glad to catch it. Teenage actress Wen Qi is exceptional!


4) Grain (dir: Semih Kaplanoglu)
- Semih's famous Yusuf trilogy consisted of the films, "Egg", "Milk" and "Honey". "Grain", however, has nothing to do with the trilogy, it's a scifi meditation on survival.


5) 120 BPM (dir: Robin Campillo)
- That soundtrack of this film by Arnaud Rebotini!!! Normally when one tells you that they "liked the soundtrack" of your film, most probably they have nothing else to say about the film, so I have to dispel it. I do think the film's great, there were moments in it so awesome in its visual flair. But that music just stayed in my head. Wish I had done the protest scenes in River of Exploding Durians with that much verve and energy.


6) Two Persons (dir: Prem Shankar)
- A Malayalam film in competition. Set in one night, a man meets a woman, a nocturnal journey, they discuss about love, life and things that trouble them.


7) Loveless (dir: Andrey Zvyagintsev)
- Yes, it's amazing. And I'm so glad the film had a theatrical release in Malaysia. There's a scene in AQÉRAT which was actually a homage to Zvyagintsev's previous film Leviathan ;)


8) Call Me By Your Name (dir: Luca Guadagnino)
- Loved Guadagnino's "I Am Love", which I had constantly revisited. This one's actually more restrained and subtle, yet it lingers, like its song.


9) Newton (dir: Amit V Masurkar)
- India's submission to the Oscars. A rousing, crowd-pleasing film, which, again, had audiences cheering and clapping hands during certain moments and lines of the film.


10) Let The Sunshine In (dir: Claire Denis)
- My biggest regret was being too shy to say hello to Claire Denis when I saw her at the Jeonju International Film Festival in 2011.


11) A Fantastic Woman (dir: Sebastian Lelio)
- Caught this on the last day of the festival. It was a morning screening, I woke up, I saw the Oscar's shortlist for Best Foreign Film. Among the 9 films, 2 I saw at the festival (Loveless and The Insult), so I needed to make it 3 instead. It was worth it.