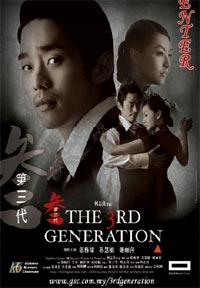 [Disclaimer: This entire post was written with a lot of sarcasm.]

It happened more than a week ago, when I chanced upon Jesscet's entry (I believe she's a writer for KL Lifestyle and possibly a journalist for Malay Mail) about the Malaysian production, 'The Third Generation' where she mentioned that the film being billed as the very first 'Cantonese art film in Malaysia'.

Never much of a fan of anyone who labels non-mainstream films as 'art films, I left a comment showing my curiosity.

"First Cantonese art film in Malaysia? Really? What about those stuff by James Lee? I just feel that the term 'art film' is highly subjective. Usually used to describe aethestically-pleasing (that's rather debatable) non-mainstream films ala Wong Kar Wai's works, or in America, non-mainstream films that are shown in arthouse cinemas (instead of those cineplexes), knowing that 'art' films are generally non-profitable, I find it strange that the filmmakers of 'The Third Generation' would label their own film as an 'art' film. Let alone, the first ever in Malaysia."

(Note: I mentioned James Lee because his 'Beautiful Washing Machine' was mostly in Cantonese, whilst both Ho Yuhang and Tan Chui Mui's works were in Mandarin)

However, this RM1 million production is indeed marketed as THE first art film in Malaysia, and Malaysia's submission to the 2006 Cannes' Film Festival (according to this Think Online review). I wasn't sure whether it was worthy of making such lofty claims, but after seeing this film just now, I realized that 'The Third Generation' will most likely win the Palm d'Or award, and make massive ripples throughout the international circuit, leading to its inevitable Oscar nomination for next year's Best Foreign Film award.

This film is art.

Its settings, 1970s Penang, came alive in its own, drapped in lush romantic colours, accentuating the diverse and complex Malaysian Chinese culture. Not even Tokyo was portrayed that well in Lost In Translation, and Wong Kar Wai and his cinematographer Chrisopher Doyle were made to look like amateurs in their portrayal of 1960s Hong Kong in 'In The Mood For Love' and '2046'. For, this was a 1970s Penang unlike anything we've seen before, .

There is a Chinese proverb that said that a family's accumulated wealth cannot be maintained past the 3rd Generation, this is a tale of the Chan family headed by a patriarch (a magnificent Cheng Kam Cheong, as dignified as Anthony Hopkins) who believes in preserving the Chinese traditions and customs, and his relationship with his UK-educated son, Charlie (the Clark Gable-esque Nicholas Teo), and Charlie's westernized bride, Susan (whose luminous beauty rivals Audrey Hepburn's).

Can Charlie handle his family's business, when he is torn between the love of his wife and his beautiful secretary Linda (a marvellous Carmen Soo)? This is actually a sci-fi film, time had ceased to move around the characters, the clock was eternally stuck at 3 o clock, and the clandestine meetings between Charlie and his mistress Linda consist solely of them stretching their sentences and then speaking simultaneously and incorrigibly whilst giggling at each other at the empty night streets.

But then, there was no need for them to speak comprehensibly as the viewers were all bearing witness to a highly private moment between two soulmates, and the words they whispered to each other were so secretive and seductive that it would be an injustice to be portrayed onscreen, for, what they said to each other were only meant for themselves, and not for the viewers.

Time never moved. Always stuck at 3 o'clock. Because ambitious first-time director CL Hor is implementing the great Russian director, Andrei Arsenyevich Tarkovsky's 'Sculpting in Time' theory upon his own film. Basically turning his film into a medium that takes our experiece of time and alter it, by using long takes and few cuts in his films, Tarkovsky aimed to give viewers a sense of time passing, time lost, and the relationship of one moment in time to another. But CL Hor took this a step further by infusing upon the film a feeling of stillness and immobility, a sense that the film would never end and all scenes would linger, trapped within time. It was how I felt when I saw the 'Third Generation', that it would never actually end, and that I would remain in the cinema for eternity, experiencing the pains of timelessness like the film characters.

Dialogue meant nothing in this film, everything that was spoken were meant to be mysterious, haunting and lyrical, like the lyrics of a song from heaven. One will never discern what the characters were saying to each other, there was no need to, the love between the three protagonists were illustrated most in two impressively shot dream scenes that paralleled one another. Susan dreamt of her dancing with her husband, but all she could see were two silhouttes dancing in a room shrouded in darkness, whilst minutes later, we see Linda dreaming of her dancing with Charlie, and this time, both characters could be clearly seen. Why? To illustrate the fact that Susan's relationship with Charlie had reduced to nothing but a fading shadow, whilst Linda and Charlie's forbidden relationship was represented by a smoldering, erotic dance. It was the most sizzling and sexy scene I've ever seen in years.

A normal person could try analyzing and reviewing this film using conventional methods, and then criticize it for its soulless, emotionless core. (like Malay Mail's review here) But that would be superficial, for this is a practice of minimalism at its finest, director CL Hor had drawn his influence from the likes of Godard, Truffaut and Antonioni, but surpassing all these three cinematical masters by conjuring a climatic romantic scene of sheer exhuberance. Instead of using dialogue, or facial expressions exchanged between our ill-fated lovers, a pop ballad was used, and we were able to see our two leads each taking turns to strike poses before the camera, culminating with the male protagonist weeping by himself.

This was a love shared only by two people. Their surroundings meant nothing.

And things weren't meant to be, and we knew it.

Nothing summed this up better than the scene.

It was filmmaking mastery.

It was sheer genius.

I wept and knelt in reverence after the film was over. I had just seen the one film destined to change the face of Malaysian film history, and I was grateful of my own existence.

"When asked why he wanted to do an 'art film' in a Malay Mail interview, CL Hor said,

"There’re three dimensions to it. First, an art film usually gets more recognition at film festivals and competitions. I was thinking what I could do for my first movie. If I were to do a comedy, I don’t have Stephen Chow; action film, I don’t have Jet Li and Jackie Chan; and romance, I don’t have Tony Leung and Maggie Cheung. The second thing is though our resources are limited, I discovered we have many talents in Malaysia and I need to find a platform for them. I also wanted to do something which will make Malaysia proud. And third, as Malaysian Chinese, sometimes we don’t seem to have an identity of who we are. I want to portray that identity in an artistic way so people in other countries would have a better understanding of who we are. Why Cantonese? Because many of us grew up watching Hong Kong TV drama series. We speak Cantonese with a mixture of other dialects. So, it’s easier for us to distribute the film in the Asian market, like China and Taiwan, as a foreign language film. As for Hong Kong, I want to tell them we speak the same language, but with our own ‘gist’. "
His answer showed that CL Hor had done something film legend Orson Welles had never done, considering the marketability and commercial viability of his film, this is a man who will not try to get his film studio in trouble. There was no need to lament about his inability to get Stephen Chow, Jet Li, Jackie Chan, Tony Leung and Maggie Cheung in his debut feature, for it was THEIR loss to not have the opportunity to collaborate with this genius.

I had learnt much from him after reading his Malay Mail interview, despite being a filmmaker myself as well, I had always been naive, and I didn't really try make the kind of films labeled as 'art films', and then ship them to film festivals. Simply because I dare not make such bold assumptions like CL Hor did. One line in 'Perhaps Love' by Jackie Cheung (who played a filmmaker) stuck with me.

"There's no indie or commercial films, those are only methods for me to make my films, and I only strive to make good films."
But after seeing 'The Third Generation', I realized that I should adhere to CL Hor's way of thinking. Instead of trying to make a 'good' film, I shall aim to make 'art' films for the sake of gaining recognition overseas.

[UPDATED 24/12/2008: Two years later, in 2008, the highlight of THE 3RD GENERATION, Miss Carmen Soo, would star in a very nice little award-winning film called KURUS, or known to overseas audiences as DAYS OF THE TURQUOISE SKY, which you can read about in detail here in this blog. I really think that DAYS OF THE TURQUOISE SKY is a good film with a wonderful performance from Carmen, but then, I may be biased, being one of the film's producers and editor. *winks*]
Email Post
Labels: Andrei Tarkovsky Film Reviews James Lee Liew Seng Tat Tan Chui Mui