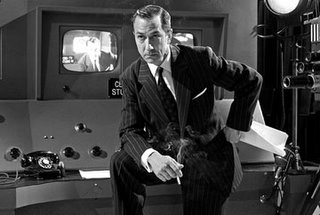 I believe one has to do some research on American history to really appreciate 'Good Night, And Good Luck', George Clooney's sophomore directorial effort, more as it is about an important political case that affected the entire nation back then. (Click here for the Wikipedia entry about McCarthyism, and here for the entry about Joseph McCarthy). I actually did some readings about this a couple of months ago when I learnt about the existence of this film and its subject matter, and well, to me, it was rather interesting.

A brief summary about McCarthyism:

From 1950-1954, in their attempts to counter the American Communist Party subversion, people suspected of being Communists and Communist sympathizers, the US government subjected all kinds of people into aggressive witchhunts based on questionable or inconclusive evidences.

During that period, Senator Joseph McCarthy would destroy his political opponents by accusing them as traitors. Many lives were ruined, the nation was simmering with tension, even numerous Hollywood stars were driven out of the country for possibly being associated to communism (Charlie Chaplin was one of them).

And so, annoyed with McCarthy's bullying ways, a group of newsmen, led by television journalist Edward W. Murrow, attempted to remove this political cancer from office to ensure freedom in their country. This happened with the airing of Murrow's critical 'Report on Joseph R McCarthy', and also the broadcasting of video footages showing McCarthy's controversial interrogating methods. Witnessing him in action for the first time (and not just a mere name in a newspaper article), there was a negative backlash against him from the public.

Desperate to save his reputation, McCarthy appeared on Murrow's show three weeks later and threw silly accusations and personal attacks at Murrow. The senator ended up making an ass out of himself (... Murrow was really popular), his popularity declined further, and that signaled the end of his powers. 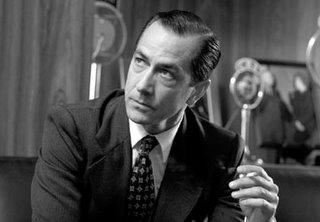 The film 'Good Night, And Good Luck' is about the conflict between Murrow and McCarthy, from the show that criticized McCarthy, to the show where McCarthy foolishly tried attacking Murrow. It's pretty short (90 minutes), and besides a banquet scene, a bedroom scene, and a jazz lounge the entire film takes place in the CBS station. The tension Murrow (David Strathairn, cool beyond belief, looking more like Humphrey Bogart than Murrow) and his colleagues felt when they decided to launch in the attack, how Murrow and his faithful producer, Fred Friendly (George Clooney) had to pay for the losses suffered by their station when advertisers backed out.

It's black and white, and shot in such a way that one would indeed believe that it was a film of the 1950s (I know I would if I couldn't recognize the actors in it), no showoffy camera techniques were used (like Clooney did in his directorial debut, Confessions of a Dangerous Mind), everything was driven by dialogue, and the atmosphere, where everything's shrouded in shadows and swirling cigarette smokes, is perfectly noirish. And most interestingly, instead of getting an actor to play Joseph McCarthy, Clooney actually used stock footages of that actual guy, thus making things seemed much more realistic, it wouldn't be strange when one would start to think that he was watching a documentary instead of a film with George Clooney in it.

So yes, it's entirely dialogue-driven, it does not take place in anywhere else but the CBS station, but it's riveting, to see how these courageous newsmen would cope at the face of adversity, when all odds were stacked against them. I have described what the film is like, it's now a matter of whether it'll interest you enough to check it out.

And many have said that the situation faced by the Americans then during the McCarthyism era is similar to what they're facing now. I would like to say that it is similar to the current political climate in Malaysia, but most of all, I couldn't help but think of the blogospheres in Singapore and Malaysia. People tend to have different viewpoints on certain situations, and conflict arises when none of them agree to disagree, although the actions of one party is deplorable and perhaps inexcusable, the actions taken by the opposing party to perpetually harp about the former's wrongdoings, their beliefs in binary oppositions, their inability to accept anyone who does not agree with their opinions definitely do not make them any better as individuals. After all, what was meant to be a noble service for McCarthy's own country became a selfish display (or sheer abuse) of powers. One does not simply become a 'good person' just because the things he opposes are 'bad', yet because some people are so stubborn in their beliefs that opposing something bad will immediately make them good that they can find all kinds of justifications for any questionable actions they have done against their oppositions.


"We will not walk in fear, one of another. We will not be driven by fear into an age of unreason, if we dig deep in our history and our doctrine; and remember that we are not descended from fearful men. Not from men who feared to write, to speak, to associate, and to defend causes that were for the moment unpopular."
- Edward W. Murrow, 9th of March, 1954