Fun With Dick and Jane (I miss the serious Jim Carrey) 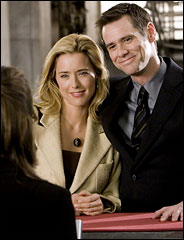 But somehow, I just seem to enjoy Jim Carrey in a drama more than in a comedy these days. Despite being his personal top-grossing movie, I wasn't that impressed with Bruce Almighty (it was kinda good, but not THAT good). And despite the great-looking settings, Series of Unfortunate Events left me rather underwhelmed (and it didn't really strike me as a Jim Carrey film). Perhaps I am more impressed with his dramatic acting skills than his talent for humour, and that I am just as disgusted with the Academy for never giving him an Oscar nomination for either Truman Show or Eternal Sunshine of the Spotless Mind. But I'll get back to that later.

His latest, Fun With Dick and Jane is a comedy, but it's not as funny as everyone would have expected. In fact, to me, this is more a tragicomedy than a comedic comedy. We see a man, Dick, (Carrey) who finally gets a long-awaited promotion after 15 years of serving his company, only to realize that his new role as vice president in charge of communications is to serve as spokesman as his company's stock is plummeting. His company is exposed as nothing but a lie and worth less than zero, and he has to suffer the consequences. (it's supposed to be a satire of Enron)

His wife, Jane, quits her job because of his big promotion, but with this cruel blow of fate, both of them lose their retirement savings, their lawn, their furnitures, the electricity, everything. Things become so dire that the couple and their son have to shower under the neighbour's lawn sprinklers. The husband tries to get a job, only to be laughed at for his meltdown on TV by interviewers . Then he suffers all kinds of indignity, gets beaten up, and arrested when he tries working as a supermarket greeter and a day laborer. The wife signs up to be a lab rat for a cosmetic product testing, and her face becomes swollen after going through its negative effects. Suffering from sheer poverty, they even have to eat at the local soup kitchen.

The scenes of our protagonists' misfortunes elicited some laughter, but it's undeniable that Dick and Jane are indeed suffering for real, and that what was played laughs in this movie could very easily been a tragedy in another. So, Dick and Jane decide to overcome this adversity by robbing banks, and we get to see them trying to get their revenge against those who have wronged them during the first half of the movie. Whatever poignancy I sensed at first dissipated once the film becomes a slapstick, light comedy.

There isn't much for me to say about this film, except for the surprise I felt when I realized that it isn't as fun as its title suggested, and how sad it actually has the potential to be. But why am I harbouring such thoughts when I was only watching a Jim Carrey comedy? Perhaps I share this reviewer's sentiments. Here's an excerpt from that review.


It's a real shame, and I blame us for it. He was great in more dramatic roles like Man On The Moon, The Truman Show and The Majestic, but Jim never received Oscar nominations or high praise for those. Instead, while George Clooney is allowed to grow up and make acclaimed films like Syriana and Good Night, and Good Luck (and rack up all sorts of golden awards and nominations for them), Carrey is forced to dress up like Cher in Fun with Dick and Jane. That's right, LAUGH CLOWN LAUGH. The world is telling him to act silly, put himself through physical torture and entertain us. Just don't try to be serious anymore. It's a shame because he deserves better than this movie, which almost took away my Christmas cheer.

Even WILL SMITH has gotten an Oscar nomination... in spite of Bad Boys 2, Men In Black 2 and Wild Wild West, yet all these are denied from Jim Carrey, it's kinda ridiculous really. So, I'm sure many will prefer to see Jim Carrey in a comedy, but for me, I will wait for the day when Jim Carrey is in a drama again.