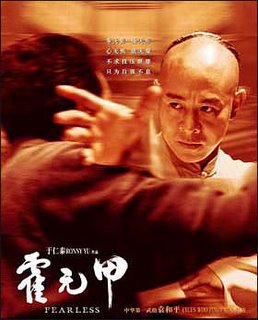 Visiting the cinemas thrice in five days can be quite mindnumbing, but nevertheless, it is the Chinese New Year period, thus it is a little tradition of mine to see every single Chinese movie that's showing at the cinemas.

Fearless is widely-publicized as Jet Li's very last martial arts film and is a highly-fictionalized account of Huo Yuan Jia, founder of Jing Wu Men, a martial arts school in Shanghao, and a semi-prequel of sorts for Bruce Lee's film, Fist of Fury, and its 1994 remake, Fist of Legend (a Jet Li film!). (Huo Yuan Jia is the master of the films' protagonist, Chen Zhen, played by Bruce Lee and Jet Li)

There are a couple of reasons why this is the most looked-forward Chinese New Year blockbuster:

The fighting scenes are choreographed by Yuen Woo Ping, he who did the fighting scenes for Matrix and Kill Bill, and yes, most of those Jet Li classics like the Once Upon A Time In China series and Fist of Legend, that it's pretty obvious Jet Li's saying goodbye to martial arts films by returning to his roots and allowing viewers to revisit the films that made him the household name he is now.

Unfortunately for me, they even brought back such nostalgic elements like dubbing Jet Li's voice. Despite the fact that his voice was dubbed in every single one of his HK films (except for the 1998 Hitman/King of Killers), I've gotten so used to his actual voice during his seven years in Hollywood that hearing him speak in a low-pitched, supposedly manly, heroic voice again just kinda irked me.

Plot in a nutshell: Arrogant and ruthless martial arts master (Jet Li) has defeated almost every single challenger that stood in his path, but a violent battle with a rival fighter triggered a chain of tragic events that destroyed his life. Losing the ones he loved, he fled to a peaceful village, discovered what it is like to live again and becomes a better and more noble person. He returns to Shanghai, becomes famous for fighting in a highly publicized match against a British boxer/wrestler, then is invited to an even more highly publicized match organized by four foreign ministers/investors (not sure) eager to let China see the fall of their hero.

Martial arts isn't about defeating your opponents, or getting revenge, it's about strengthening your mind, your soul, and your body. You must not strike fear upon others, all you have to do is win their respect. The best martial artists aren't the ones who can kick anyone's asses, they are the ones with HEART. They fight only to protect their loved ones, and cease fighting if it is necessary. One fight to discover himself more, his ultimate opponent is himself, and he has to defeat this opponent to become MIGHTY.

Right, lots of Zen Buddhism elements and other stuff that Jet Li had wanted to convey in the film, he had said that being his last martial arts film, he wanted to let his audiences know about his own philosophy about martial arts. Well, despite being rather preachy at times, it isn't as blatantly wince-inducing like 'The One', even so, his determination to deliver this message to his audiences disrupted the pacing of the film. I have to warn you all, it's not a testerone-charged film like those Once Upon A Time in China flicks, and unlike Wong Fei Hung (Once Upon A Time In China) who worries about big issues related to nationalism, patriotism and honour that make him larger-than-life, infusing within him a mythical quality that allows viewers to remain riveted throughout those films, this one's more like a drama, with a number of great fighting scenes scattered throughout. In most of the film, the demons Huo Yuan Jia deal with are more personal, which will very easily alienate lots of viewers who cannot relate to this character.

However, the fighting scenes are really good, albeit a little too brief. Just a swift burst of violence and brutality and BAM! It's over. Many of those impressive-looking fighting scenes shown in trailers actually lasted only for a few seconds. It's disappointing, but other than that, these fighting scenes in the film really did showcase Jet Li's true martial arts skills (no wire-fu rubbish or special effects), and remind people that no way you could ever see Jackie Chan doing the nifty moves Jet did in the movie.

I mean, c'mon, how many people besides me are actually tired of seeing Jackie Chan repeat the same routine in his films OVER AND OVER again.

Why am I dissing Jackie Chan in a Jet Li film review? It's simple, I'm somewhat worried about Jet Li's future. The fact that he doesn't want to appear in anymore martial arts film is somewhat reassuring, you won't see him recycling his bag of tricks for another twenty years like Jackie Chan does. However, if he does NOT appear in a martial arts film, what the hell is he going to be in?

Jet Li is a better actor than most people give him credit for, but I'm not sure whether he can really reinvent himself as a character actor instead of an action star (like Bruce Willis did).

When the film ended, the guy sitting behind me was weeping. I'm not sure whether it was because of the emotional ending, or because the idea of seeing Jet Li in a romantic film in the future.

(Note: It's been announced that Jet Li has signed up for a film called 'Rogue', which co-stars Jason Statham of Transporter fame. Jet's going to play a brutal and ruthless assassin. I have mixed feelings for this one)