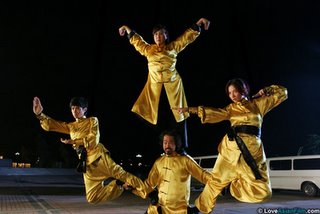 There are times when I want to become Malaysia's Wong Jing. I know this is a startling revelation for you all, that I would choose to be Wong Jing, instead of, say, Wong Kar Wai, or Ingmar Bergman, or Truffaut, or Godard, or Fellini, or even Tarantino, but the fact is, judging by the current indie film scene, Malaysia needs a Wong Jing-type guy.

His productivity is just simply prodigious (he made 5-6 films in a year, I struggled to finish one short film in a year), and the way he capitalizes and exploits the current popular trend in Hong Kong to rake in some cheap bucks clearly shows that he's a damned good businessman.

Let's take everyone's most beloved Sepet for example, I would die to see a parody of it. (cooler if the cast members are enough sport to reprise their roles) The same can be said about most other local films not named Senario, come to think of it. A comedy version of Puteri Gunung Ledang? A spoof of James Lee's The Beautiful Washing Machine called The Ugly-Ass Crickety Broken Down Washing Machine?

And thus, I continue my fantasies. But let's get back to Wong Jing. Yes, he's known for making lowbrow comedies and generally unfunny parodies who are funny because of their unfunny-ness, but at least this is a guy who tries to do nothing but to entertain. One can say that Wong Jing belongs to another level of excellence, an excellence in consistently creating films that cannot be easily measured by critics, that he has already defied what is usually used to measure the merits of a film. Entertainment value? Humour? Most of the time, his jokes fall flat, but it is like meeting a guy who is constantly trying to make you laugh with ridiculously unfunny jokes, you may end up laughing, not at the jokes, but at the guy's efforts.

And for this, Wong Jing is godly. During the late 80s and early 90s, he was the one who had the HK film industry in his hands, constantly racking one megahit after another. The gambling films (God of Gamblers and the numerous sequels), and then most of Stephen Chow's biggest hits (Fight Back To School), and some non-Once Upon A Time In China/Fong Sai Yuk Jet Li films. Then he fizzled out, and he ceased to become the box-office juggernaut like he was before, everything he made since then, beginning from the late 90s... they were well, Wong Jingesque. Films that aren't high art, but not exactly entertaining either, just Wong Jingesque. Films that make you, well, maybe smile with amusement (or shake your head in disgust) for a while, and then once they're over, you'll probably forget about them immediately. (this is proven by the extensive research I've done to joy my own memory while I am writing this review)

But he did try to prove to critics that comedies weren't the only thing he was capable of, as he would usually churn out a serious and dramatic film once or twice a year (the most recent ones being Colour of the Truth and Colour of the Loyalty, both triad films, Slim Til Dead, a crime thriller, Moving Targets, a police drama), they aren't masterpieces, but at least they are passably involving. After stomaching that many pop culture references and recycled jokes, these are at least somewhat... not very Wong Jing-esque, and you can see that he might not really be as complacent as his critics have claimed.

His latest effort, 'My Kungfu Sweetheart', marks the third collaboration between Yuen Qiu and Yuen Wah since the massive hit Kungfu Hustle. The cast also includes Cecilia Cheung (who seems to be in every single HK film these days) and cantopop singer Leo Ku (might be a film debut, I'm not sure, but I can't remember him being in anything besides TV dramas). It is the first Wong Jing film funded by Mainland China, and according to him, his homage to martial arts films and books (Wong Jing is a hardcore Louis Cha [Jing Yong] fan, he has a full collection of his books), plus his attempt in making an 'Eastern Harry Potter' since Wuxia books have always been the Eastern equivalent of sword-and-sorcery fantasy literature.

Phoenix (Cecilia Cheung) is the daughter of martial arts experts (Yuen Wah and Yuen Qiu), but she didn't know about her identity until she was 14, when she was brought to learn martial arts in this mountain during her summer vacation (replace martial arts with magic and you'll get Harry Potter). Years later, when a renegade kungfu master, Paimei (yeah, the one in Kill Bill) begins killing his business rivals in his bid to become the richest man in Asia, Phoenix and her parents (now estranged) has to save the day, as one of Paimei's targets is Phoenix's office boss, Dragon (Leo Ku), whom she has a crush on.

I'll go straight to the point. This film isn't that good, but it does not suck either. There are some jokes that work (the initials for COOO), and elements in the film that will make you go 'WTF?' for its SHEER SURREALISM (the mythical condor from the 'Legend of Condor Heroes' is a guy dressed up in a bird suit), some supposedly emotional scenes ended up feeling hollow because of the thin characterization, the fighting scenes aren't choreographed that well, the special effects, like most Chinese films these days, are distractingly bad, there are just too many plot strands that were ignored completely (or forgotten) when the film ended. But Sammy Leung (he plays the archrival in Ronald Cheng's Super Model) steals the film as Dragon's lecherous and assholish buddy, to the point where I wish that the subplot he's in would've expanded further, unfortunately, Wong Jing just isn't that good a storyteller, his films usually involve him linking some humour skits together, and for such a film, it really doesn't work. What surprised me was that I actually saw this film having the potential to be pretty good, which isn't something I would usually say for a Wong Jing film.
Film Reviews