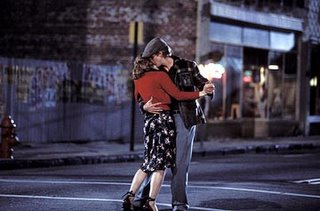 Well, since Valentine's Day is coming in a week, I have prepared to get myself into a romantic mood by watching some romantic flicks in the past few days. Two days ago, I went with the Korean flick Il Mare (currently being remade by Hollywood with Keanu Reeves and Sandra Bullock in it) and Tim Burton's animated feature, Corpse Bride, then last night, I checked out the much talked about 'The Notebook'.

Despite having the DVDs for quite a while, I've never gotten the chance to actually view it, but to most of my female friends whom I lent the DVD to, almost none of them told me that they did NOT cry at the film. Not knowing whether I could take another emotionally-charged film about Alzheimer's Disease after being emotionally-raped by the over-the-top emo Korean film, Moments of Love (sad and tragic tale of a young woman in her 20s suffering from Alzheimer whilst her poor husband had to suffer, read Lovehkfilm.com's review here), I had always left The Notebook in my shelf. 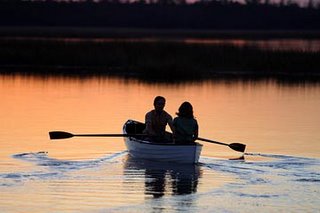 So, I finally watched it with my cousin last night, to see what's all this fuss about. How great was the kiss that won the 'Best Kiss' award for the 2004 MTV awards, how luminous Rachel McAdams (whom I started to like last yeat after Wedding Crashers and Red Eye) was in the film that made her famous, and most of all, how in the hell did it make everyone I know (...except for the Ice Maiden) weep so freely?

Being a massive sucker for romantic films and possessing an absolutely sensitive, sweet and kind soul, I had braced myself for a visual assault that would leave me all choked up and teary-eyed (I don't really cry freely during films). 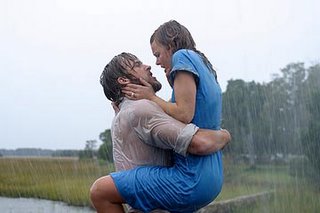 The film itself was enjoyable, and yeah, romantic. I couldn't help but notice how Ryan Gosling's (and James Garner's) Noah character reminded of, well, myself, perpetually being steadfast in his love for a woman. It's a heartwarming film, and is probably a good film to watch during Valentine's Day or something.

The supposed tearjerker didn't even make my eyes well up in tears! I was expecting it to at least suck the air off me, making me have some difficulty breathing, yet it didn't happen despite some of the much talked about scenes near the end. Even my cousin, who used to weep at anything she watched, remained impassive too.

As for the 'Best Kiss' of 2004's MTV awards. This is the reaction it generated from me.

Right, don't get me wrong, as I've said before, The Notebook is a decent film. But after all I've heard, and most probably my heightened expectations, I just feel that it's not mindblowingly good enough to have me referring back to (well, unless I really need to, er, borrow some lines from it).

So anyone else seen it? Did it make you weep? Do you think I'm really, REALLY missing something here?

I, er, found my personal lack of emotions after watching this film... disturbing. Anyway, I think I'll be compiling a list for 'best films to watch during Valentine's Day' after I return to Perth (THAT'S TOMORROW!).