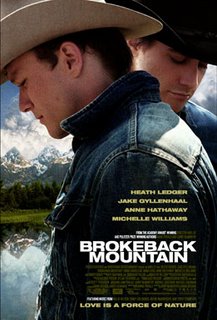 Everything that can be said about this film in a review has already been said by most American critics here. And based on Technorati, it's been the most talked about film for the past few weeks since its victory at the Golden Globes. So what can I say about Brokeback Mountain in this review of mine to make it not sound identical to the thousands and thousands of film critics and bloggers out there? Alas I am at a loss.

Even the Malaysian Chinese media, usually stingy over its coverage on the Awards season, has spent day after day reporting on its awards haul and raining praises on director Ang Lee. Chinese newspapers haven't paid that much attention to the Oscars since, oh, right, when Ang Lee's Crouching Tiger Hidden Dragon came out. If Ang Lee wins the awards for Best Picture and Best Director during the Oscars, he will become the first Asian director to ever do so, not even the legendary Akira Kurosawa had done this. Even if viewer ratings are going to be low in America, I'm sure it'll set records in China, Hong Kong and Taiwan.

Sure, this is empowering for a Chinese guy like me, but I tend to wonder whether this film will receive that much attention from everywhere if it wasn't directed by a Chinese? But then, if the film was directed by another, it would've ended up becoming a generic gay movie without the subtlety and affection that had won it so many accolades. Instead of being just a gay cowboy story, it became a film that explored the universal themes of love, of not being able to love another freely because of uncontrollable circumstances and because of the culture and society one was brought up in, of loving someone whilst risking everything one has, of being involved in a forbidden romance that could make one feel both ecstatic and disgusted at once. The protagonists of the film were two men, but it could've worked just as well if it was a tale of a man and a woman, or two women (yummy).

But by saying thus, I am doing what many other critics are accused of doing in this fabulous article from The New York Review of Books, which is to downplay the gay element of this film. When I saw the footage of Brokeback Mountain shown during the Golden Globe, I couldn't help but chuckle at how it almost seemed as if everyone was trying to conceal the fact that it was a gay film. I saw scenes of those two men embracing their wives, and then showing their manliness by beating each other, and then the iconic scene where Heath Ledger's Ennis character stood heroically against exploding fireworks after kicking some ass. Anyone without prior knowledge of the film would not know that it was a gay film based on the footages.

Yet Brokeback Mountain is a gay film. I winced and grimaced at some intimate parts between the two leads (it doesn't help that I was watching it with my mom). Not because I am a homophobe (an unfortunate accusation I've often gotten from insecure slash fanfic writers in the past) Perhaps my culture and upbringing made me rather ill-equipped in accepting this film properly, even if I could understand and feel the love shared between both men, I couldn't accept them doing this at the expense of their own happiness, and also their family members'.

This film is a tragedy, even if it didn't blow me away, the sadness of the film was haunting. It wasn't the type of movie I could just discard and forget about after seeing it. And when I could feel like that, I think it's undeniable that Ang Lee had done something right. Not only that, but the much-lauded performances of the cast members have sucked me in enough to really feel anything for them.

Jake Gyllenhaal and Michelle Williams deserved their Oscar nominations. But the person who surprised me (and probably almost everyone else) most was Heath Ledger. I've repeated this many times before, but I'll say it again, who has expected him to become Oscar material? Who has expected him to become such a great actor? Especially after watching 'A Knight's Tale'? I thought he would've been another Josh Harnett, or even worse, a Freddie Prinze Jr. I had thought that the highlight of this guy's career would be 'Ten Things I Hate About You' (don't get me wrong, I like that film a lot).

I read a Heath Ledger interview early last year where he claimed that he had deliberately destroyed his career with one shitty film after another (he was getting bad screenplays after Ten Things I Hate About You) so that he could start everything anew and reinvent his image. I remembered snorting in disbelief, thinking that he was being delusional. But after this film, the interview didn't seem that implausible anymore. (click here to read fellow Oscar nominee David Strathairn praising Heath's performance)

So yes, this film will most probably fulfill everyone's predictions and sweep the Oscars on March, becoming part of cinematic history (it is already getting there). And I don't think that it does not deserve the honour either. Let me quote something from a Stephen Holt article in Oscarwatch.com:

And when fictional screen characters’ NAMES actually pass into the world’s vocabulary and discussion , the way the names ENNIS DEL MAR(Ledger) and JACK TWIST( Jake Gyllenhaal) have, you know the actors concerned have hit the bull’s-eye of cinema greatness. That is a very, very rare occurrence. And with the landmark, and now money-making “Brokeback Mountain”, these remarkable and brave young men have both put their careers on the line, giving the performances of their lives, and are making screen history. Their two performances ARE the film. It IS the gay “Gone With the Wind.”

By becoming an 'important' film, it's unlikely that it will lose in the Oscars. I don't see anyone making parodies of Capote, Crash, Good Night and Good Luck or Munich (granted, some of them are pretty controversial subjects..) like the immensely popular Brokeback To The Future, or the funny Broke Mac Mountain (it deserves as much attention as the former, visit their main site here).