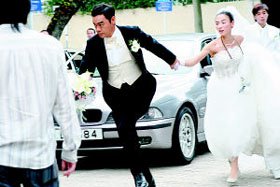 This movie is a difficult one to review, since I walked out of the cinemas with mixed feelings after seeing it. One part of me felt that I was robbed, and agreed with my sister that it was a pretty lame film since everything was so inconsequential, shallow and over-the-top silly. After all, it was just days after I've seen the old Chinese New Year screwball comedy Eight Happiness (starring Chow Yun Fat, Jackie Cheung and Raymond Wong, along with Bobo Fung, Dodo Cheng etc), despite how dumb the latter was, it was a film with heart and sincerity, the scenes between the siblings and their loved ones were affecting.

Why am I comparing Eighth Happiness with The Shopaholics? It's simple, The Shopaholics is directed by long-time Johnnie To collaborator, Wai Ka Fai. And Johnnie To was the one who directed Eighth Happiness (long before he became known for shooting his gritty crime drama and stylish triad films, Johnnie To was known for Stephen Chow movies like Justice My Foot!). And during their collaboration, both Wai Ka Fai and Johnnie To have done some great comedic gems like 'Needing You' (the film that entirely changed my perception of Andy Lau), 'Love on a Diet' and 'My Left Eye Sees Ghosts' (this film made me believe that Sammi Cheng, despite her commercial success, had always been very underrated as an actress).

I have wondered how Johnnie To and Wai Ka Fai collaborated in their films, if I ain't wrong, I think Johnnie To was the one who did most of the planning whilst Wai Ka Fai would be the one directing the people on set. And The Shopaholics might have confirmed my assumptions about their collaboration. Johnnie To is the storyteller, Wai Ka Fai's the technical guy.

Wai Ka Fai was responsible for the superb Fantasia two years ago, and the horrible Himalaya Singh last year (a film I still curse at today, check out my review for it here). But then, Fantasia was such a wonderful film because it was a homage to the 1970s-1980s HK classics, bringing back memories to anyone who was still nostalgic of the glory days of HK cinema. Like all homages (or parodies), if those films with the Hui brothers had never existed, Fantasia would've been just another silly comedy. A friend of mine thought that the film sucked since she didn't really get the in-jokes (she hadn't seen any of those old-school HK comedies), and I don't blame her for that. As for Himalaya Singh, well, it sucks.

Another part of the me was impressed with The Shopaholics' manic pace, directing flair, fast editing and the choreography of many scenes. It didn't really have the 'so bad it's funny' quality of most Wong Jing films, but its sheer zany insanity and pointlessness can really alienate anyone looking for more (like my sis). After all, some comedies can only work better when you have some emotional investment on the character, or the plot, making it easier for you to laugh at. But when everything was so surreal in The Shopaholics, you have no idea whether you would stare in disgust or just laugh (at how surreal everything was).

Fong Fong Fong (Cecilia Cheung) is a shopaholic. She acts like a madwoman when unleashed upon a megamall. Regarding this as a disease, she went to seek counsel from a psychiatrist Choosey Lim (Lau Ching Wan). Choosey Lim, unfortunately, suffers from a condition where he CAN'T make choices, from lunches to girlfriends. Despite being a martial arts expert, he can't even choose which fighting style to use.

These two are involved in a complicated love quadrangle with Choosey Lim's ex-girlfriend Ding Ding- Dong (Ella Koon... she's PRETTY) and Fong Fong's other suitor, Richie Ho (Jordan Chan). Ding Ding-Dong suffers from low self-esteem, but is also a shopaholic, though she goes only for cheap, knockoff goods (she's a 'cheap cheap' shopaholic). Richie Ho is a rich tycoon who is sometimes a miser and sometimes a spendthrift, but only when someone's competing with him financially (he goes insane during auctions despite not knowing what can he do with the stuff he's bought).

Their parents are pretty messed up too. Richie Ho's adopted dad is a pure miser, while he's biological dad (Law Kar Ying) is a gambling addict who is trying to stop himself from swearing. Choosey's dad (Wong Tim Lam, who is Wong Jing's real-life dad) is abnormal because he is supposedly the 'most normal' of them all, but in truth, he has narcolepsy.

The love and er, mental problems of our four protagonists can only be solved by Dr Phoenix Luk (Paula Tsui, returning from a long hiatus) in a phone call psychiatry during their joint wedding date (the four agreed to get married... but not sure with whom!!!!). The long back-and-forth climax had Phoenix directing the foursome into chasing, dumping and tricking their potential partners whilst getting to church on time, so that in the end, they would finally know whom they really wanted to marry by getting over their personal quirks. It was impressively directed, and amusing, and generated some emotions from me AT FIRST, but everything was so over-the-top that it soon became rather tiresome.

I couldn't help but wish that there was more about the film than just the manic activies occurring onscreen, something more, I don't know, grounded or real? Perhaps Chinese New Year films are more about being fluffy and fun these days, but I can't help but miss the older Chinese New Year HK films like Eighth Happiness, All's Well, Ends Well, ensemble flicks revolving around the love problems and misadventures of a family.

I have just checked the Hong Kong box-office before I wrote this. Fearless is slowly gaining upon Narnia as Hong Kong's Chinese New Year box-office champ (it's no.1 in China though), while The Shopaholics had made only half the grosses of Fearless despite its star-studded cast. Despite being a vastly superior film over Himalaya Singh (which was... undeservingly, last year's Chinese New Year B.O. champ, WTF?), maybe HK viewers have learnt to demand more from a film.

Yes, Fearless is that good, go see Fearless instead.
Johnnie To